Because our show season typically starts in March, I usually schedule my horses' annual exams in February. There are two state holidays in February, which means it's not too hard to fit in a vet day without having to take time off from work.
The downside to this is that February in Missouri is always a crapshoot in terms of weather. A few years ago my visit had to be rescheduled due to an ice storm. The rescheduled date ended up being like the coldest day of the month. DH set up a propane heater to make it slightly less miserable, but brrrrr. Then another year we got 5 inches of snow.
This year, thankfully, wasn't as bad. It was chilly, but working in the enclosed barn with heated water hopefully made for a reasonably pleasant visit for my vets. It also probably helped that I am down to 4 horses now! (Previous years have had as many as 8) 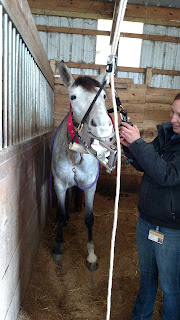 While I give my own vaccinations (a holdover from the 8-horse period), obviously I don't have the ability to test blood for a Coggins, and a licensed vet has to administer the rabies vaccine. It works out fine, since I need to have the vets out for dental exams and floats anyway! I also pay to have the vets clean my geldings' sheaths while they're drugged from having their teeth floated. While I'm capable of doing it myself, I just find it easier to add it to my already significant vet bill.
This year, I scheduled trims for the boys about an hour before the vets showed up, and the timing worked out perfectly! They got right to work and started with Ruby. She was less cooperative than I would have liked during her float (even under extra sedation), but they were able to take care of her points and one hook that was rubbing on her cheek. 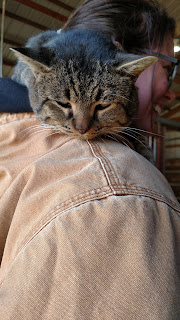 Cinna was a shit for her Coggins photos, but then a rockstar for everything else. My pocketbook got exceptionally lucky this year, as the boys' teeth were deemed acceptable to skip floats this year, since they're both primarily pasture ornaments. If I notice any changes in weight or issues eating, obviously I will revisit, but for now, they're fine. They did still have to get drugged for sheath cleaning, poor guys.

All in all, a very productive morning! Everyone got the rest of the day off to recover.
Posted by TrainwreckInTeal at 7:13 AM