This is going to be a slightly melancholy departure from my usual writings (I promise tomorrow should be back to normal), so feel free to skim and/or skip. I might not even leave it up, I don’t know yet. I just need to write this. Last week, I learned about two deaths from cancer – it really made me stop and ponder the impact people can have in others’ lives, even if the interactions were brief.

The first death was of a pillar in the Iberian community, Amber. I met Amber when Tres went to AAALSHA Nationals back in 2010, and despite being separated by many states, we became FB friends. I admired Amber not only for her mad skills with horses, but also her boundless passion and willingness to devote herself to various causes. She was one of the founding members of AndalusianWorld.com and the Andalusian World Cup – giving me the opportunity to spend a week immersed in the breed I’m so passionate about last September. If it weren’t for Amber, I wouldn’t have had that chance.
While I won’t make our relationship sound like more than what it was, we did enjoy exchanging messages about several rather ridiculous people in both the dressage and Andalusian world, and she could always be counted on to stand up and call a spade a spade. Waking up a week ago and pulling up FB before leaving for work, only to find the news of her passing as the overwhelming theme of my news feed was a shock. I sat at my computer and cried for a while, then tried to pull myself together enough to go to work. Knowing how much grief I felt at what was really only a passing acquaintance makes me hurt so badly for all of her family and friends that shared a deeper relationship. Amber was one of those people you meet and never forget. I can’t imagine there is an Iberian owner in the US whose life she didn’t touch in some small, but significant way. Money is currently being raised for her memorial service.
The second death is a little more complicated for me. I guess I’ll start with a story. Almost 10 years ago, a family started boarding out at the barn I kept Jack at – their son Jonathan, a few years older than me, started taking lessons and riding frequently. We struck up a friendship that while brief, had a lasting impact on my life. Without getting into the weeds and typing up a novel, my friendship with him and his family allowed me to rescue Jasper – Jonathan helped me find a place to board him temporarily, loaned me a round pen and water trough, and even was the recipient of a panicked phone call when Jasper hurt himself. He is also indirectly the reason I met DH, which was clearly a life-changing event. And without Jasper, DH and I never would have bought property – without property, I never could have impulse purchased the two Iberian mares that set me so irrevocably on this path I walk today. So many of the things I take for granted in my daily life might never have happened if I hadn’t met Jonathan and his family.
While our friendship faded as we both moved into different seasons of our lives, I still peripherally kept in touch and was aware of some milestones in his life, first through social media, and then through my contact with his dad. Although my recollection of the timeline is imperfect at best, I remember being excited to hear when he became engaged, and then happy for him when I heard the news he and his wife were expecting twins. I also remember my sorrow at hearing of his initial cancer diagnosis, and then feeling elated to hear he was in remission. I ran into him at the local grocery store once and we chatted about a new job he’d gotten that he was excited about. I saw the GoFundMe started by his coworkers when he and his wife’s beautiful twins were born premature, and I thought of them often and hoped they were thriving.

I really couldn’t tell you what prompted me to check up on him last week. Maybe it was hearing the tragic news that Amber lost her battle with cancer. I’m not sure. But when I did, I was devastated to discover that his cancer had come back, worse than ever, and that he lost his battle in September – the same week I flew out to Vegas for AWC. My heart is still breaking for his family -- I can’t even imagine being in his wife’s shoes, and the knowledge that his two sons will grow up not knowing their amazing dad… it just kills me inside a little. There is a GoFundMe to cover the financial burden his family faced before his passing. 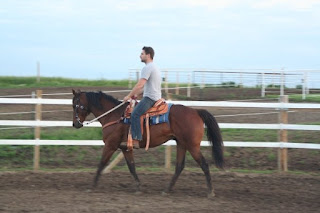 I’m really not sure what the purpose of this post is. Maybe it’s that I’m struggling so much with what some people might consider a disproportionate amount of grief over this. I grieved my grandmother when she died – I don’t think anyone found that odd. But grieving two people who in the grand scheme of things were not terribly close to me or a major part of my life? I think that’s a little harder to understand from the outside looking in. And logically, that makes sense. But emotionally, I’m still grieving. Grieving for the Iberian world that will never be quite the same, without Amber’s brilliant smile and helping hand. Grieving for the schoolkids who will never be taught by Jonathan, a gifted teacher and coach – and especially for his kids. Grieving for families that had to bury two vibrant, passionate, terrific young people who were lost much too soon. Grieving for two people who had a significant impact on my life – whether they knew it or not.
I promise tomorrow will go back to normal content (especially since I have managed to work at least one of my horses this week)... but right now, I just needed to get this off my chest.
Posted by TrainwreckInTeal at 4:00 AM