I may not have much to write about on the riding front, but today my old man Jack turns 25.
Technically as an OTTB, I guess I should have celebrated on January 1, but I've always been more about the actual day than an arbitrary one. Jack has been in my life since the summer of 2006, making him my longest relationship outside of my actual family. He was the impetus behind so many life-changing decisions, but particularly buying this acreage and committing to hobby farm life.
He is a quirky old dude, even in retirement. I was just joking with someone on FB last week that every day when I turn him out, he HAS to run at least three laps of the pasture at full speed (which even in his heyday, was woefully slow), which is even slower now that he's 25 -- for reference, the chubby Spanish mare can keep pace, haha.
For the first time last weekend, I noticed gray hairs on his face when I was working on getting his winter coat shed out. He comes out of his stall creaky in the morning, but he will still cheerfully make mischief if given an opening -- like a few weeks ago when I opened his door to pick his stall and he immediately ducked out of it and went on a run-about in the front yard. 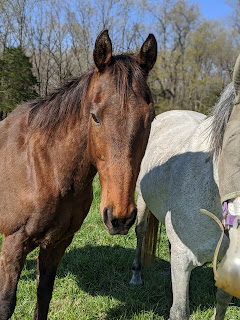 He and Cinna are still inseparable -- the amount of time they spend grooming each other is ridiculously adorable. Every year I watch him carefully for signs of struggle in the extreme heat and extreme cold. He drops weight at those times and then I spend the rest of the year putting it back on. His monthly feed bill exceeds the other three horses, the goats, the chickens, the dogs, and the barn cat feed bill combined, and he still looks far ribbier than I'd like on any given day, despite me trying every weight supplement and idea known to man and regular discussions with my vets. But he still nickers every time he hears me walk into the barn, and still gleefully plays tag with Cinna in turnout every day. He frisks me for treats when I visit with the shedding blade, trying to make him look some semblance of presentable. I don't know how many more years I'll get with him, but I'll treasure every second. Earlier this week, I busted out the birthday decorations and we had a mini photo shoot. 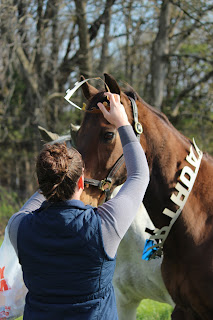 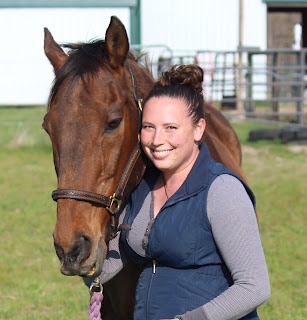 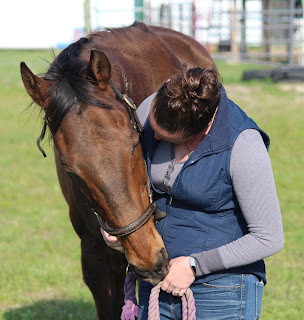 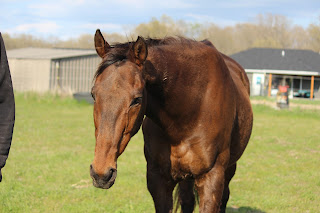 And I think the birthday stuff I bought for Cinna like two years ago has officially outlived its usefulness, haha. I had to tie the "happy birthday" banner in knots to get it to stay on and then shred it to get it back off, lol. Oh well. It was fun while it lasted! Happy birthday old man! I hope we have many more together!
Posted by TrainwreckInTeal at 4:30 AM