Okay so I drafted yesterday's post last Friday and I really didn't think we would get anything done over the weekend...
My husband is historically not nearly as keen to start (or finish!) my projects as he is his own, but after we spent a full day Saturday on his projects, that evening I nicely pointed out we spent all of March and April to date on his projects, and I've been waiting for FIVE YEARS to finish that tack shed... Lol. So Sunday morning without being prompted, he dragged out his tools so we could get started.


That didn't take too long, and the cut up brace actually was the perfect length to reuse for the ceiling braces we needed - kismet! The original wiring in the shed was basically just two lights, an outlet for the dehumidifier, and a vent to try to help regulate the temperature. During initial construction 5 years ago, we didn't plan to put up real interior walls, so the electrical was all run on the outside of the studs. In order to put up the paneling, that all needed to be rerun through the top plate and studs. While he was rerunning it, he also added another outlet for the heat/AC unit. I may still have him run one more outlet, for a barn fridge (duh!) and a WiFi extender so it gets better internet access. You can never have too many outlets!
When he finished that, we decided we might as well dive into the flooring too. I had moved that over early last week to acclimate. Flooring was tricky because we had to floor a few rows, move stuff, floor a few more, move more stuff, etc etc etc 😂 this would have been SO much easier if we had done this when we built it, but, ya know 🤷‍♀️ 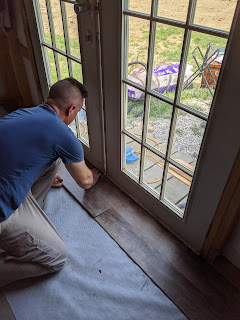 We had all the flooring done by mid-afternoon, so DH wandered off to tinker on some stuff in the garage (he had a non-running tiller someone gave us, that he had working again by Sunday night), so I plugged away on the insulation on my own for another hour or so. I used everything leftover from the garage, and the rest doesn't have the backing on it so I figured it might work well for the gable ends.
All in all, a pretty productive Sunday! My packages of organizational supplies start arriving this week, yay! Which at least makes me feel like things are progressing, even if it's much slower than Sunday 😆.
Posted by TrainwreckInTeal at 5:00 AM