So remember when I mentioned I was trying to DIY some lamps? Being stuck in the house 24/7 gave me a bit of a yen to decorate things. I decided to start with bedroom lamps - our comforter is aqua (or you know, teal) and grey, so I figured matching lamps wouldn't be too hard to find. And they weren't. But damn, lamps are expensive y'all! So I managed to meander down a rabbit hole of DIYing Mason jar lamps, and it sounded like something that would at least keep me busy for a week or two, so I got started.

And then I started trolling around for lamp shades. Which, man, what a fucking racket. Those are also annoyingly expensive. I briefly considered trying to DIY those too, but decided I was all crafted out. Finally I settled on some and placed my order. And this is what I got:
I giggled like a maniac when I opened the box. DH watched me put them on, looked at me, looked back at the lamps, sighed, and walked out of the room. To be fair, they definitely did list the shade dimensions, but I'm not a very visual person in terms of being able to imagine measurements when I read them, so I just assumed it would be okay. Whoops. 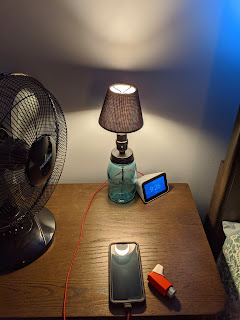 Eventually I'll buy bigger lampshades, but for now, they make me smile every time I see them, so they can stay!

Annnnnnnd that's the reason it would be a truly terrible idea for me to DIY a chandelier for the tack shed. This is one of those times I'm happy to shell out for something I'm really bad at doing myself 😆
So I bought a chandelier. I wasn't super keen on paying what Amazon had it listed for, but then I found it almost half as much on eBay. And then Jen sealed the deal when she said "It's the perfect blend of 'this is a barn' 'easy to clean' and 'THIS GIRL IS A LITTLE EXTRA". Sold. Gimme the chandelier.
Posted by TrainwreckInTeal at 6:00 AM