Well, anyone who knows my DH will know that the minute he knew the last tractor wouldn't work for him, he was already off and scheming trying to find the next one. We had quite a few leads on promising ones due to comments on my FB page, and then we both took a partial day at work Friday so we could spend the afternoon cruising some dealerships again (clearly not the one we bought the last tractor from). We got a good tip from the dealer we actually bought our ancient (1940s) Ford 8N/brushhog from back in 2009 when we bought this property -- their dealership down about 2 hours southwest had just (as in a few hours before) taken in a Case IH that sounded like it would fit the bill. We didn't have anything planned, and the horse trailer was in the shop, so we decided to road trip down and check it out.

After test driving it a bit, and chatting with the salesguy, DH decided it would suit our purposes. It's a smidge smaller than the last one (something like 50HP instead of 60HP?). It's also only 2WD, but with the massive savings between what we spent on the last one and this one, we can lay down a gravel road for where it needs to drive to drop round bales (which we wanted to do anyway), so not having 4WD shouldn't be an issue. The 8N also doesn't have 4WD, and we've never gotten it stuck, despite some sticky situation, so I think it should be okay. This one came in on trade from the pilot who owns/maintains the local airstrip, and all he used it for was mowing and plowing snow off the runways -- it was METICULOUSLY MAINTAINED, the stickers were still on the tires, haha. It also came with a microfiche of the parts list (along with a manual) that DH is going to see if he can have the inmates at work transfer to a DVD or PDF. It's a '91 or a '92, like the last one, but in WAY better shape. The only downsides were it didn't come with a bale spike (which we ended up buying online last night, so no biggie), and it had turf tires instead of ag tires. We're probably going to run it with the turf tires for a bit and see how it goes -- if it seems to struggle, we can always buy a set of chains, or swap them out for ag tires. Either way, the price of the tractor meant it was worth a little extra effort for the spike and tires (if we need to change them). Next we had to figure out how to get it home. This dealer regularly runs trucks between their dealership and the one closer to us, but DH didn't want to wait that long. There just so happened to be a U-Haul across the street, so we popped over to see if they had a car hauler. Lo and behold, they did, so we did some creative loading, and took the tractor home that day! 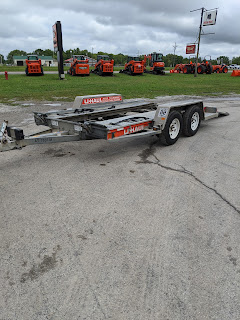 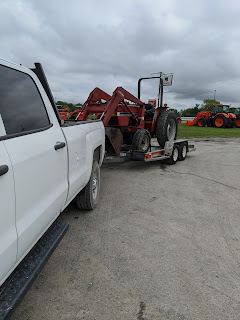 I don't have any photos of DH running it, but he did go push back the manure pile a little more to test the turf tires, and he went and poked our round bale stack with the bucket, and he thinks it has more than enough power :) hopefully the bale spikes arrive soon, and then I can get some action shots of him dropping round bales (since it's getting close to the time I pull the horses off the pastures and we swap back to dry lots). He messed with it quite a bit over the weekend, and no leaks, so it already seems more promising than the last one!