Wayyyyy back when in the winter of 2017, I was contacted by Two Horse Tack about reviewing one of their items. I picked the buckle nose halter, in teal (naturally), and have been using it ever since as Ruby's main halter. (side note: that was the last time I accepted something for free to review, because I was concerned about affecting my amateur status which continues to be relatively irrelevant at this time as I am STILL not a USEF member but SOMEDAY haha)

It's been on my to-do list pretty much since 2017 to buy more for the rest of my horses -- despite some minor QC issues (noted in my original post), I do think they're great halters for the price if you're willing to roll the dice on the customer service and sizing. Every time I've gone to the website with the intention of ordering them at full price for the rest of the horses, that's been what stopped me. But earlier this month, they ran the buckle nose halters as their deal of the day for a reduced price -- it was also the same day I got a contact lens rebate from my eye doctor, so I threw caution to the wind and went ahead and ordered some. Cinna was still using a (formerly) teal nylon halter I bought new for Topaz (so like, 2014? 2015?), Jack's Horse of Course halter was looking pretty rough, and in for a penny, in for a pound, right? New halters all around! Well, not for Ruby, because hers looks fine! 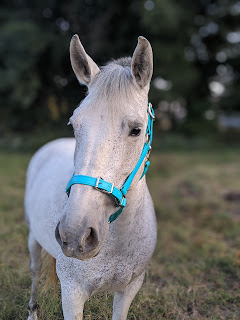 I went ahead and got Cinna an identical halter to Ruby, just in a size down (horse, instead of warmblood) -- which, another side note... their sizing is still the dumbest, LEAST intuitive thing I've ever seen, ugh. It fits as expected -- she's on the tightest hole in the noseband (seriously I want to see the horse that wears anything other than the tightest hole in the noseband, all four of mine have theirs done all the way up). She's got space to go up or down on the crown, and I got it in the generic 1" width, as she doesn't have a particularly refined head. I mean, I guess it's a little refined compared to some of the honkers you see on Iberian horses, but nothing crazy.
I briefly debated getting teal halters for everyone, but then I realized that would probably make things a bit confusing when hanging them up together for turnout. So, Jack got his in royal blue -- which is a throwback to the nylon halter I got for him when I first bought him in 2006 (oh you sweet summer child, it didn't even have a chin snap haha). I went ahead and stuck with the horse size (only because a friend ordered a cob for her very very standard cob and it was way too small), but I went ahead and got his in the 3/4" width because his face is pretty refined. 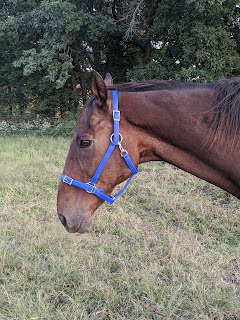 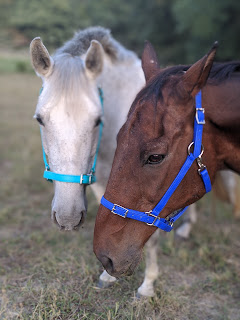 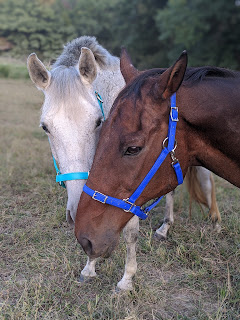 Since Trigger "belongs" to DH (I mean let's be real all of the horses expenses and his basic management falls to me, lol), I let him pick out the halter color for Trigger. He has been wearing a hunter green one that looks pretty sharp on him (and somehow didn't fade nearly as badly as all the other nylon colors I've ever tried) that's a smidge too small in the chin. After reviewing all the colors, DH picked the merlot/maroon. Went with horse size for him too, in the 1" width, which seems to have been a safe choice. The only thing that concerns me is the chin snap takes a little finagling to get on and off (it's like the opening of the clip is just a smidge too small for the ring it needs to clip over?), so we'll see if that gets better or if I have to attempt to deal with their customer service. Fingers crossed it resolves on its own, lol. 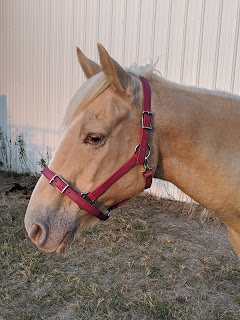 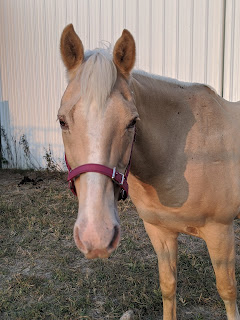 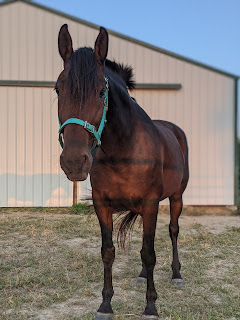 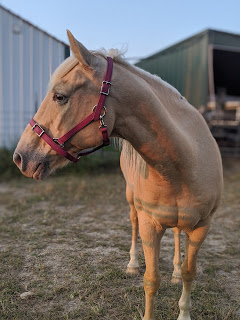 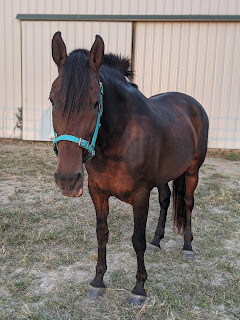 At any rate, if you're looking for a durable, fun-colored halter that can take a licking and keep on ticking (seriously I leave mine out to bake in the Midwest sun/freeze in the Midwest winters and Ruby's has had exactly zero attention other than getting rained on since I got it), this is not a bad option. I know there are other sellers out there with biothane, but I still love the buckle nose design and haven't found anyone else offering that. My horses are all pretty standard cob/small horse (minus Ruby who is more large horse/OS) and the regular horse size for everyone (except Ruby) seems to be a relatively safe bet. These ones feel a little nicer right out of the bag than Ruby's, so I hope they're as durable!
Posted by TrainwreckInTeal at 6:00 AM