Lest you think all I do is trail ride these days (I wish, lol), Ruby and I are also back to pretty regular dressage schools! I eased back into things with quite a few short rides, and I'm still probably not quite back to the full level of work we did when we were in regular lessons, but my ankle has been doing well so I'm going to keep slowly increasing things (and connect with TrainerB about a virtual lesson, huzzah!). After several wretchedly hot weeks, this week has been much nicer! I was able to ride both Monday and Tuesday morning when it was about 60 - bliss! 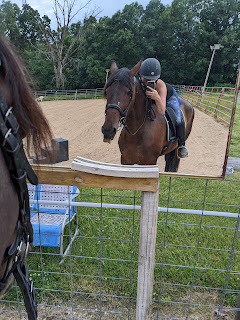 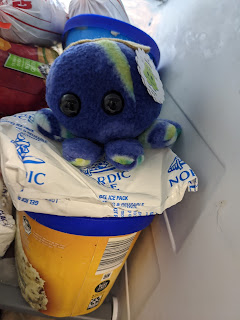 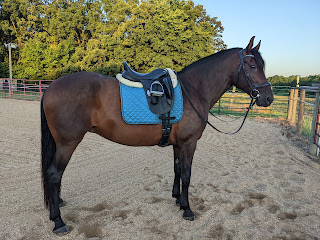 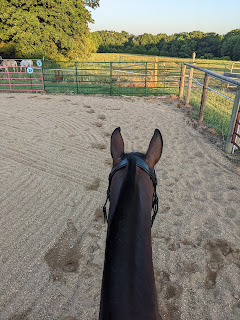 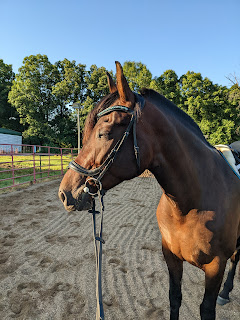 Monday night it was so nice (only about 80 degrees) that I desperately wanted to ride a second time once I finished working. I don't think my ankle is to a point where I want to subject it to one of Cinna's patented "spook and spin" maneuvers, which she is pretty much guaranteed to pull after a month off, so I opted to get Trigger out for some conditioning instead. Since he's back in the rotation as a trail horse for me/my friends, I figured he could use a little extra riding! 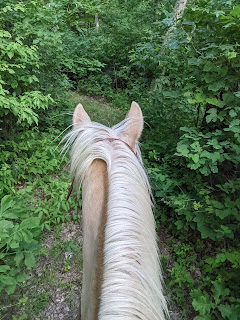 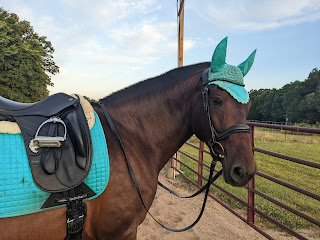 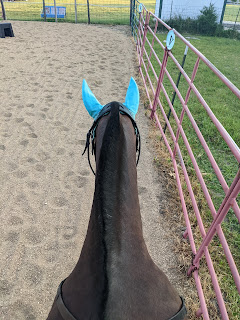 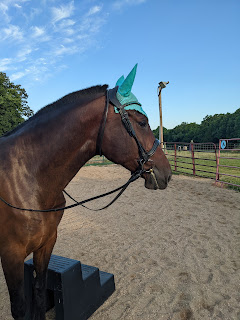 I think the ship has sailed for me and Ruby in terms of Pony Cup this year (entries are due this week and I am just... not in the headspace for it) -- but there is another rated show the first weekend in August (coincidentally the show I spectated at with TrainerB's barn group last year to get to know them!) so hopefully if I can pick back up with virtual lessons, that will be a possibility. This show season hasn't quite panned out how I was hoping when I had BIG PLANS in January, between inflation destroying my show budget, TrainerB leaving her old barn and the interim one being so hard for me to get to, gas prices getting/staying obscene, and now my fucking ankle, but c'est la vie I guess. At least all the registrations and memberships are in order and I DID learn how to navigate the paperwork headache that is recognized shows, and I also got a saddle that helps me ride IMMEASURABLY better, and I hopefully nailed down a system so we can do remote lessons, so.... good things happened this year!
Posted by TrainwreckInTeal at 5:00 AM 10 comments:

Whew, this weekend was busy! Saturday was HELLA HOT, and my trail friend group actually ended up making some plans to ride early Saturday to beat the heat. I had already committed to boating that afternoon with DH, and I also was driving to meet up that morning with someone who wanted to trial the Custom (FINGERS CROSSED), so I ended up not being able to make it. Sad for me, but it looks like they had a blast! Sunday looked much cooler though, so I couldn't bear to let the weekend pass without hitting up a trail! And it worked out perfectly to take a small group (just me and two friends) up to Rudolph Bennitt. For ease of trailerpooling, one friend rode Trigger, I rode Ruby, and then we picked up a third friend who was attempting her first big outing with a new to her horse (legit the cutest pinto gaited horse, ADORBS). She had been riding him at her barn, and hauled out to a friends earlier in the week and he had been perfect, so she was ready to hit a bigger trail!
The morning did get off to a bit of a disastrous start when I hooked the trailer and the truck kept throwing a brake system error code -- SIGH. Since about February I have been intermittently getting that code and generally just unplugging the brakes, wiggling the outlet, and plugging it back in fixes the issue, but the brakes chose violence on Sunday and WOULD. NOT. COOPERATE. Originally DH thought the issue was the aftermarket bumper on the truck (whoever wired it in did a... uhhhh... questionably job, lol), but after more digging he thinks its related to some brake control module so a new one is on its way and hopefully that fixes the issue. Anyway, cue lots of panic, but friend who was riding Trigger saved the day by just bringing her truck over and hooking to my trailer. It made for a slightly later than planned start, but since the day was so (relatively) cool, it didn't matter much! 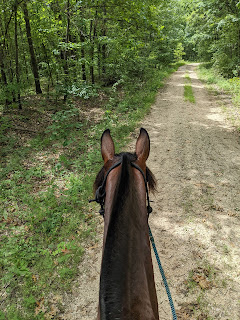 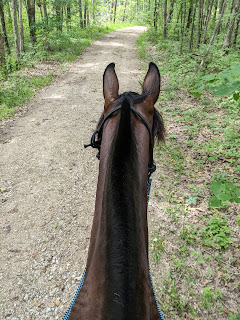 There was another small group at the trailhead we parked at, and they headed out the opposite way - we ran into them about halfway though :) the gun range was empty when we rode by, but we did hear some gunfire later, and we ran into some guys packing up fishing poles at the lake, but aside from that, it was a very quiet day! The friend with the new to her horse got to try him out at the front, middle, and back of the pack, and she also found some new gears in his gait! And she got him to canter up a few hills, which she hadn't been able to get him to do at home :) He was totally chill when Ruby and I cantered away and left him, and he didn't mind Trigger cantering up behind him - basically she put him through his paces in all kinds of situations he might experience on the trail to see how he reacted, and he was foot perfect. She got a good one :) there's one particularly adorable photo of me and Ruby riding next to them (although the angle makes Ruby look like a legit giant lol) but I (generally) try not to share too many photos of other people here because ya know, just because I put all my business on the internet doesn't mean other people do lol. Anyway, take my word for it he was cute. And Trigger surprised me again by being peppy for the second weekend in a row, and he had a great time with my friend (and even offered some canter, which is rare for him lol). 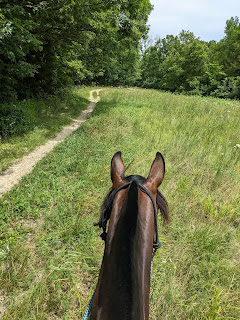 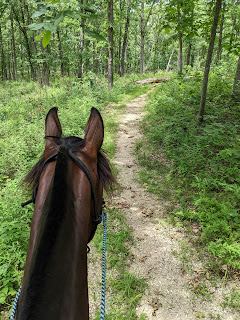 My screenshots no longer show up in Google photos when I'm trying to add media to these posts (no idea why and no energy to deal with it lol), but we did a little over 9 miles in under 3 hours. After I got home I had more chores, so by the time I finally collapsed on the couch and thought to myself "gee my ankle is a little sore tonight", my Garmin reminded me that I'd take the equivalent of 30K steps and climbed 47 flights of stairs and I was like "ohhhhh that's why" haha. Anyway. SUPER FUN day, and looking forward to more trail outings with both those friends soon!
Posted by TrainwreckInTeal at 6:00 AM 4 comments: 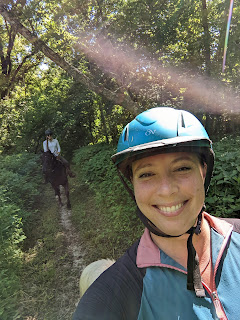 After a lovely low-key ride (approximately 5 miles in a little under 2 hours), one of the ladies let me stash the ponies at her place so we could go have a delicious brunch! Well okay everyone but me had lunch but I opted for breakfast food and had ZERO regrets.

I'm really digging the trail riding crew we have put together this summer -- enough people that we can swap in and out as necessary when people have other plans and still have a good-sized group, and several of us have "spare horses" for those who want to hitch a ride. I'm still working on getting them to Indian Camp Creek or Broemmelsiek (lol), but we've definitely covered a lot of ground on the more central Missouri trails! We've even successfully worked out several trailerpool situations to conserve fuel!
Posted by TrainwreckInTeal at 5:30 AM 6 comments:

The heat wave really kicked off on Sunday, so after sweating my ass off during that 20 minute ride, we decided to hit the river! I'm a glutton for punishment so I wanted to take Penny AND Cici. In retrospect, Cici is old and set in her ways and a bit of a princess, so she will probably stay home on future trips and we'll just take Penny, who is a confirmed and unabashed river rat, lol. 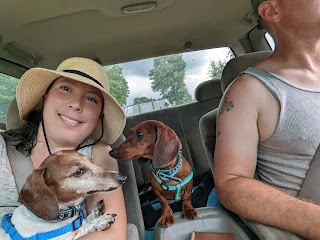 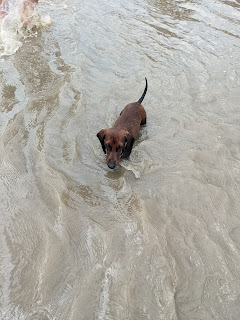 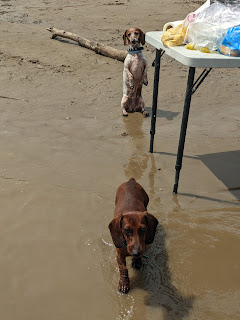 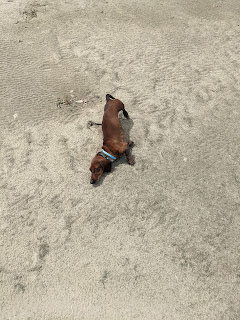 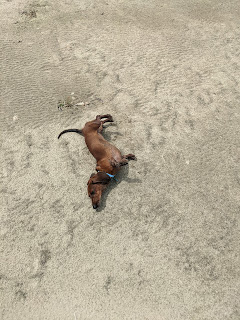 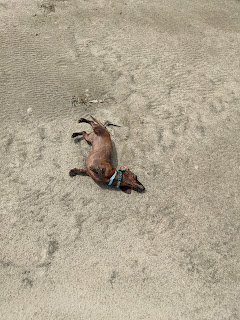 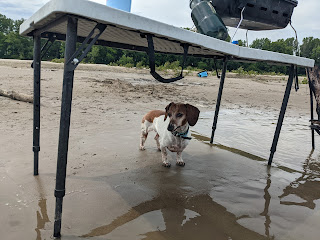 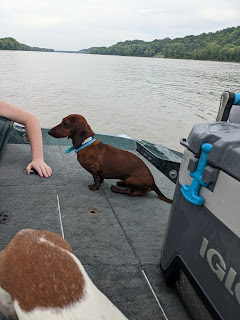 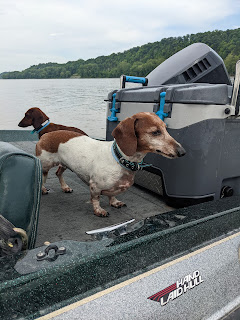 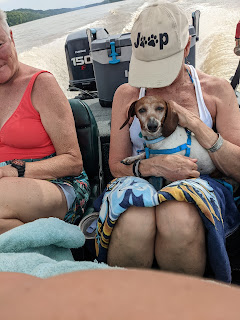 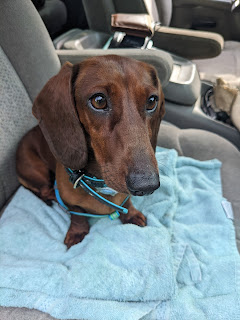 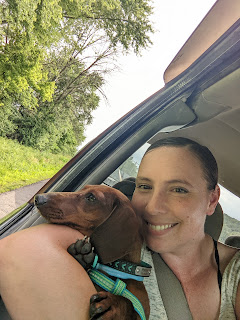 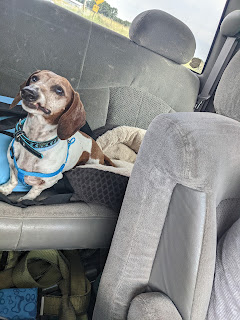