Finally made it back out for a lesson Friday (state holiday ftw!), not that it was terribly productive - considering aside from the 15 minutes of snow walking we managed, she hasn't been ridden since my last lesson in mid-January - and that was also the first time she'd been ridden in a while haha. Sooooo...3 rides in 6 weeks? 🤦‍♀️ At this rate we'll never be ready for the first recognized show on my trainer's calendar in April 😭 I'm trying to remind myself that riding regularly always seems depressing and impossible in Jan/Feb/March and I always miss boarding with an indoor, but this too will pass, hopefully sooner rather than later, and I'll get back on a schedule at some point.

It was good to get out and at least let Ruby stretch her legs, and my trainer got to see the "new" saddle. Definitely had good clearance and wasn't pinching anywhere, so I'm going to try to keep riding in it until the fitter can check it out assuming Ruby doesn't start objecting. Her canter departs were incredibly launchy in the lesson, but I think that was probably more a result of all her energy than any issue with the saddle, but I'll keep an eye on it. One of the other Spanish horses in my trainer's barn also goes in an Advantage, so that was nice to hear! I felt pretty secure in it during the lesson but reviewing the handful of photos DH took through the lounge window (he was babysitting Cici who had an acupuncture appointment after my lesson) I had a particularly bad chair seat to start the lesson but it did seem to improve towards the end when I was riding less defensively, so also something to keep an eye on.

The trotwork was mediocre, and we mostly spent it making tons of changes of direction and changes of bend, struggling to keep the hamsters on the wheel in her brain. The canter was WILD and I spent most of it in a half seat just trying to keep her on a 20m circle, leading to my trainer joking that usually her number one rule is don't pull, but that was occasionally superseded by the need to stay alive 😂 then her number one rule was to stay alive by whatever means necessary haha. Definitely had to utilize the emergency rule of needing to stay alive more than once, haha. In retrospect, it might have been smarter to swap her back to the Verbindend (and I may still do that for the next lesson), since Ruby's made it very clear that occasionally when she's excited that the nathe is fake news and she will just run through it. 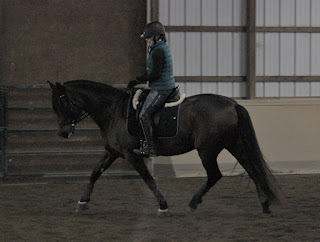 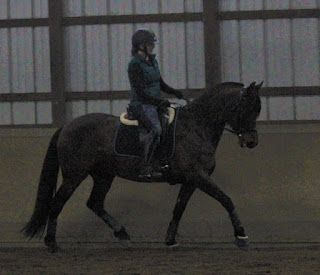 It's supposed to warm up this week but then also rain a lot, so no idea when I'll be able to ride at home again. At least the weather next weekend looks warmer so hopefully we can make it out for another lesson. Just have to keep chipping away as we can 🙃
Posted by TrainwreckInTeal at 5:00 AM