Sunday Renate had plans to haul to a local facility for some XC schooling, so naturally we made it a group outing and OF COURSE I brought my camera :) we didn't have to be there until midday, so after chores, we got to have a pretty leisurely morning! This included several cups of London fog and chai for me, plus a decadent breakfast. I ate better on this trip than I have in years, and fully expected to come back weighing 10 points more than when I arrived, lol. Magically I did not, probably because we did SO MANY THINGS the whole time so I was able to burn those calories right back off :) 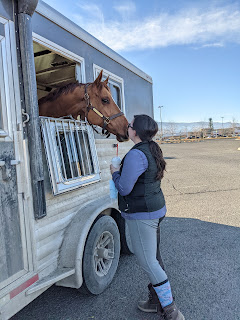 Now for the photos from my real camera! They're a bit out of order as well, but I got some nice images of Renate warming up in one of the fields, then we wandered all over the facility trying to find the safest XC jumps (there was ice around some of them, and some were into or out of turnouts containing horses, so none of those were great options), and then finished up in their outdoor arena so she could pop over some stadium fences! We got to be ground crew to help set poles ;) and Renate even had time to jump around a few times with adventure unicorn 2.0!

On the way home we stopped at this amazing burger place (that we also stopped at on Friday on our way back from Lake Tahoe) and stuffed ourselves while I frantically refreshed stats on the AFC championship game (which KC completely and utterly bombed, womp womp) and Renate scrolled through the jompies photos on my camera. We ate so late/were so full that we went back and then were completely lazy that afternoon and just snacked for dinner, lol. T introduced me to Tillamook cheese (which, living in BFE Missouri, I had never had), so we made the most delicious snacks with it and I am now obsessed. This was such a cool day - we got to give Gatsby and Cowboy a break from packing us all over, but still definitely MORE than got our daily horse fix, and it was so fab to watch Renate and Vesta absolutely killing it over all the jumps.
Posted by TrainwreckInTeal at 5:30 AM