My lesson last Sunday was really good! I felt more confident where I left things with Ruby the week before/our pickup ride at my friend’s arena so I put her back in the nathe for this lesson (which, spoiler alert, not actually my best decision, but whatever lol) and we were able to more or less get right to work and the trotwork felt decent out of the gate.

We worked on 10m circles and leg yields, and while the left (our good direction) was normal, to the right Ruby started out even worse than usual in terms of being willing to bend. She repeatedly flipped me the bird in the 10m circles and then COULD NOT with the leg yielding. I saw her tongue flash out of the side of her mouth once or twice and asked TrainerB if she had her tongue over the bit? We finally were able to do a couple of good circles to the right/finish with a decent leg yield so I immediately gave Ruby a break and got off and verified that yes, she had in fact gotten her tongue over the bit :( TrainerB and I adjusted the bridle and got her all sorted out, and the rest of the lesson was better (from a not angry gnashing on the bit perspective). 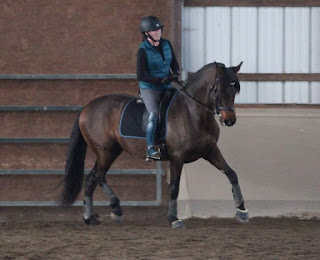 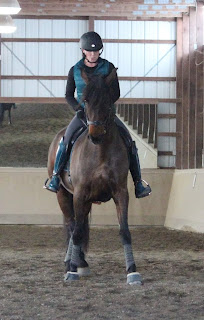 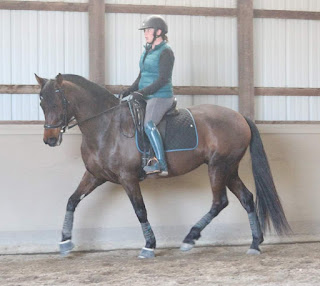 The canter was better than it had been but still not at all what she’s capable of, which got TrainerB and I talking about the saddle. I’m still riding her in the Custom that I brought back from Reno, and I still love it…. But after three lessons in a row, we were starting to wonder if maybe Ruby didn’t. The saddle fitter won’t be out until April, and TrainerB did a preliminary check and didn’t see any MAJOR issues the first time I brought it, but Ruby was letting me know pretty emphatically, especially in the canter, that something wasn’t working. The first two lessons I could chalk up to just being a little feral from the time off, but in our lesson Sunday she randomly leaped through the air several times, which is not at all normal for her. Expressive canter departs? Yes. Occasionally straight up just trying to run away with me? Also yes. Propping around like that? Not normal for her. 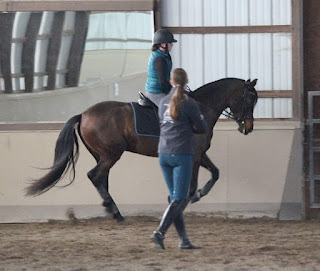 Although I will say in one of the more dramatic jumps (I’m calling it a jump because that’s what the Equisense registered it as lol), I gritted my teeth and just carried on cantering after and TrainerB was like “wow, you didn’t even move through all of that, just sat calm in the center and let her go and picked her back up at the end”…. Lol. I was like well yeah, 10 years of riding exclusively green horses means I had to figure out pretty early on how to STAY ON THE HORSE. I may not look good doing it, but I very rarely come off the horse (and then for good measure I knocked on one of the wooden beams in the barn because I do not need the universe taking that as a challenge to make me eat dirt). We did finally get some decent canter and called it quits on that, and then circled back (ha) to some more trotting to the right working on bend.

While Ruby cooled out, TrainerB and I touched base about the first recognized show on her calendar (the first weekend in April), and I told her I just didn’t feel like there was any way I would feel good about taking the horse I currently had (at that lesson) out in public to show 1st after so much time off in January/March because of the weather. She completely understood, and we talked about rerouting to some other options, but the next show she had on her calendar is not-Rolex weekend (and I already have XC tailgating plans/tickets), and then the next show after that isn’t until mid- to late-May, which feels like an eternity away at this point…. #firstworldproblems

However……. I’ll give you full details in my next post, but I rode Ruby at home this week in her old saddle and she was a COMPLETELY DIFFERENT HORSE, so…. I’m not ready to completely write that show off yet. It’s a long shot, but it’s not impossible!
Posted by TrainwreckInTeal at 5:00 AM