Around the beginning of the month when I was sort of vacillating back and forth about showing, I went ahead and called to set up my annual vet visit. I used to be really punctual about a February appointment (because there was a March schooling show I attended for like 5 years straight), but a few years ago when I sort of unintentionally took a break from showing I got a little lax and the appointments had been sort of creeping into late spring. In 2020 I was like "nothing matters and I'm not going anywhere" and let it get away from me until May haha. 2021 was fairly similar, so my current Coggins are from last May. They actually were still in date for the purposes of the show I signed up for in April, but I want to get back into more of a late winter time frame to make sure everything is ready for future show seasons :)

I do my own vaccinations (with the exception of rabies), so no issue ordering/administering those (Valley Vet FTW, I ordered them on February 28 and had them delivered and administered by March 1 lol). I did request the vet who specializes in dentistry for this appointment, only because with both Jack and Trigger missing so many teeth these days, I wanted to make sure we were in a good place heading into spring.

I had a few things I wanted to talk to her about - for once it isn't Jack's weight, he looks GREAT (for him), and I'm pretty content there, but Trigger is looking decidedly.... ribby. He also struggles off and on with some fecal water syndrome. I know Cinna is too fat, but she's already dry lotted/only turned out with a grazing muzzle and I work her as often as I can but with only an outdoor, she blimps up over the winter usually. I also wanted to touch base on Ruby - at my lesson two weekends ago, after I got off we were all standing around talking about the show for a minute when all of a sudden Ruby put her head down and like a shotglass full of... clear liquid sort of came out her nose? No coughing, the liquid didn't smell, and aside from a little clear discharge like every 3rd or 4th ride she hasn't had any other issues or symptoms, but I just wanted to touch base for my own peace of mind.

I always love working with this ambulatory crew because they have students so plenty of hands to get things done efficiently, we have a long history so they know the general management style I have with my horses, and they (mostly) know I'm not a completely crazy horse owner, so I can bring up any concerns I have and we can talk them through. When I called to make the appointment I actually inquired on whether or not they were recommending the botulism vaccine (after hearing some horror stories from a farm down in FL), and they weren't, but we were able to have a nice chat about vaccines and how different areas had different recommended "core" vaccines.

The rest of the visit was pretty humdrum - my favorite kind! Everyone's teeth had some points and definitely needed to be done, so I'm not sorry that we made the appointment a little "early" this year. Both the geldings have what the vet lovingly refers to as "old man teeth" that are showing a lot of wear, and are probably not doing them a whole lot of good when it comes to chewing on hay. We discussed upping Trigger's senior feed and beet pulp a little until the grass starts growing, but the vet felt pretty confident that about 90% of my concerns would probably be resolved once he's on grass again -- especially since once mine are worked up to all day turnout, they're usually out 16-18 hours a day. So to maintain his weight over the winter he may just need to be on similar rations to Jack (which, sigh, my poor wallet). 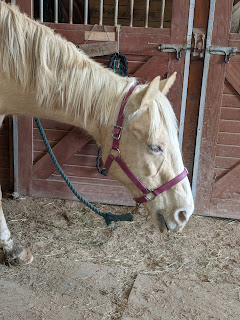 Trigger was, predictably, a little bit of a dick about having his teeth floated (he usually is, sigh), but the vet was able to get in there pretty quickly once she figured out his game and get it done despite his best efforts to the contrary, lol. Jack remains the lightest of lightweights (seriously they gave him a pony dose and he was LEANING ON THE WALL because he couldn't stand haha), and she was happy with how his mouth (and body condition!) looked after extracting all his incisors in 2020. 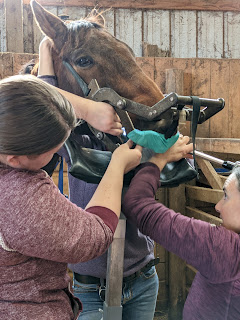 As they were finished up Jack's float and getting ready to clean his sheath, they had an emergency call come in that just so happened to be not too far away, so we wrapped things up quickly so they could get on their way! Jingles for that emergency call, I hope it was one they could help sort out <3 And now everyone is set for what is hopefully a fun year or showing and riding and travelling!