While I was gone at my lesson two weekends ago, the weather was lovely and DH dove headfirst into some farm projects. He tore down a few of the front fence posts that needed to be replaced, and while he was drilling in posts for that he also put in the telephone pole posts I’ve been saving for my outdoor washrack! I’ve been bugging him to build one for me for a few years and we couldn’t agree on location, but that morning before my lesson we walked off a few possible options and honestly it made the most sense to go where I currently groom/tack up anyway, between the barn and my tack shed. At the time, that area had a little gravel with some mats on top, but still had a tendency to get boggy when it was wet (being between two buildings, it doesn’t see much direct sun. We already had a pipe system bringing water over to that area (it’s where the barn dry lot water trough is), and so it would be simple to add a connector for a hose. The sticking point for bathing there before was the cross ties are set in a way that I don’t ever want a horse to pull very hard on them, so I needed a better option if I was going to bathe in it. So the Sunday before last he set the posts and then last week ordered gravel (omg so much gravel lol) and built up a very big base for the water to filter through.

Sunday after my lesson (two weekends ago, sorry I’m trying to keep things semi-current!) he kept working, building some additional drainage systems to try to avert some of the water from pooling between the house and the barn, so that also got gravel last week. The lot in front of the barn now should be big enough to turn the horse trailer around in, and the gravel path along side the lean-to means I don’t have to slop the horses through the mud taking them out to ride, yay!

While he worked on the drainage, I got both horses ridden, it was a glorious day. Cinna had been out two days the previous week so I expected her to be pretty good, but for some reason she had some FEELINGS about the “scary corner” of the arena down by the cemetery, so we both had to work a little harder than we wanted before we got the good work I know she’s capable of. Still itching to get her to TrainerB for a lesson, but it will have to wait until April or May sometime! 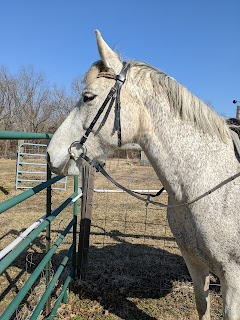 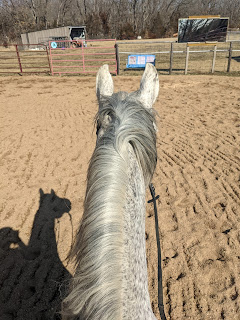 Ruby was also good, although a bit anticipatory about the canter, so I opted for an exclusively walk/trot ride. I particularly wanted to work on replicating some of the stretchy trot we’d practiced in the lesson, since currently it’s not something we’re able to put together with any consistency. I was happy with where we finished up though, so cheers for actually being able to work on things between lessons, something I couldn’t do in January and February lol.

Wednesday of last week was dry enough (well, sort of) for the gravel delivery, so DH stayed home and used his toys to move rocks around all day. Bliss! To celebrate, Mother Nature bitch slapped us the next day with more snow, sigh. Because apparently we can only have winter on Thursdays and Fridays, and then Sunday was in the 60s for my lesson lol. 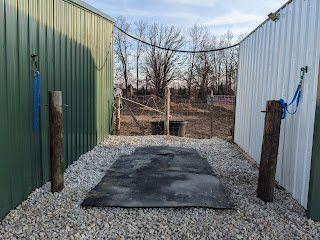 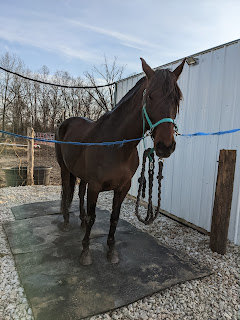 I also did sneak in another ride before the garbage weather (which also happened to be the day I mailed my show entries), and Ruby was LIT. It was still productive though, even though I was a little sad I'd forgotten to bring out the Equisense - I feel like it would have registered a lot of "jumps" in the way of EXTREMELY UPHILL AND UNECESSARY canter departs, haha. 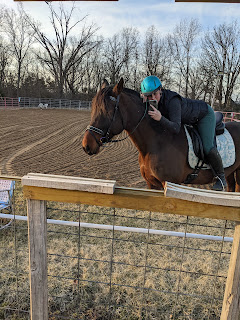