Sunday I was able to meet up with TrainerB for my first lesson in a month! Unfortunately due to some circumstances outside my control (the fucking continuing ridiculous price of gas and the fact that she's currently working out of a facility that is a longer/far more inconvenient drive for me), I am definitely not going to be able to keep up weekly (or even twice a month at this rate) lessons, which sort of sucks. We're exploring the options for some remote/virtual lessons in the interim. Eventually she will be at a facility that is a much easier drive for me, but I don't have a timeline on that yet so sort of in a holding pattern there (which is fine). Disappointing in the sense that I was really digging the weekly lessons, but I'm trying to be more zen about the things I can't control haha. 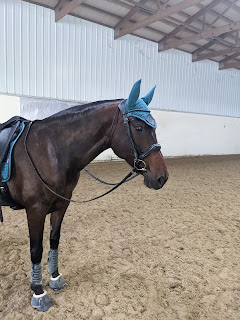 The weather Sunday was a bit dicey, as storms were rolling through the area at around the same time I had my lesson scheduled. The facility I hauled to had a decent sized outdoor, and a fairly small indoor, so we opted to start outside and see how much we could get done before the rain started (ended up being about 2/3 of the lesson, which was great!). 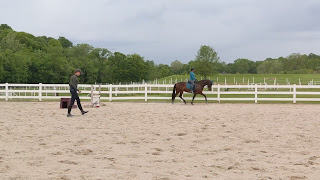 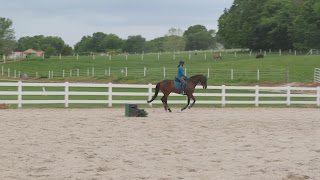 When I posted some stills on IG, one astute follower called the saddle "the missing piece", and the phrase has just been bouncing around my head ever since. I was super excited to get a full lesson using it, and TrainerB was nearly as excited as I as about it (how is that even possible, right?). And because a new saddle wasn't enough of a change, it was also our first lesson (and only like my 6th or 7th real ride) in the Turtle Top. Both pieces of tack got a resounding thumbs up by the end :) Between not being able to hang on my hands in the Turtle Top, and the new saddle being SO SUPPORTIVE so Ruby couldn't yank me out of position at the canter, I felt like I was completely "plugged in" and able to ride so much more effectively.... predictably, Ruby was unamused, haha. We both worked HARD. 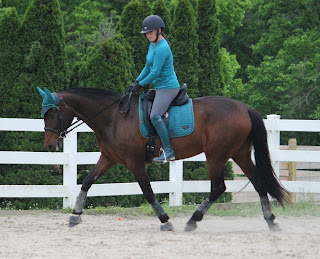 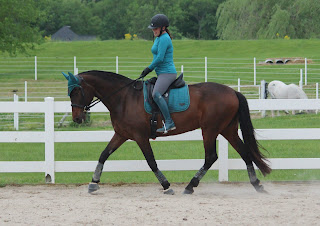 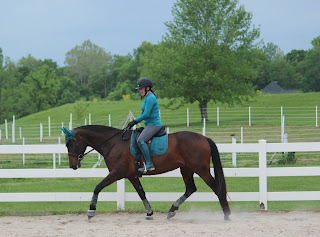 Quite a bit of the work in the trot was aimed at helping Ruby complete the full length of stride (touched on at this lesson), but something about TrainerB using the phrase "think about bringing your hips to your elbows" Sunday clicked for my brain and helped me give Ruby the space she needed to come allllll the way through. She was a bit fussy in the contact since she couldn't lean, but we definitely had some nice moments where she acknowledged that she could be responsible for carrying her own damn self lol. I've gotten a bit reliant on riding in the dressage arena at the old facility and was very used to the letters as landmarks and not having to navigate around jumps, so this lesson was good practice for me in terms of getting out of that rut! And honestly aside from a general hairy eyeball to everything going on outside the arena (horses coming in and out of turnouts, etc), Ruby worked fairly well in a completely new place. She had more of a tendency to giraffe than usual, but it was manageable. 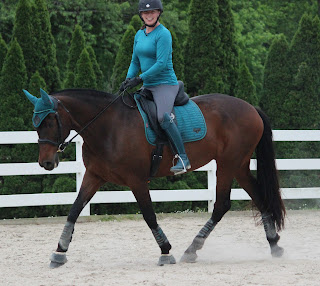 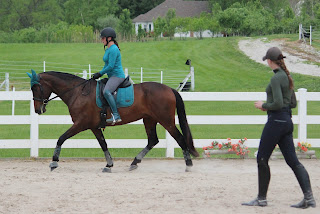 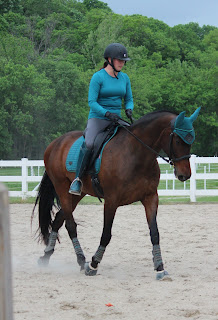 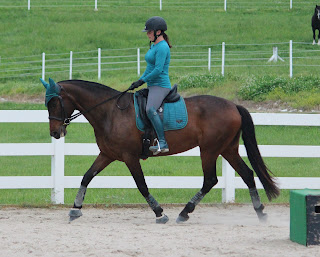 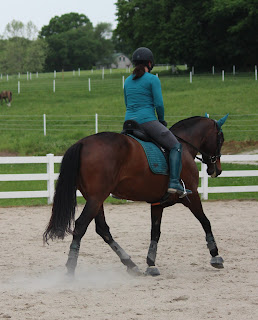 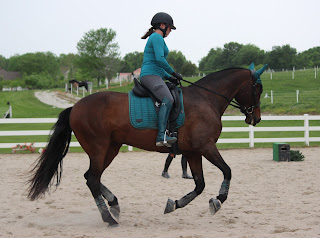 We only got to canter about a circle each way in the outdoor before our luck ran out with the rain and we had to dash for the indoor. TrainerB decided to kill two birds with one stone and introduce a leg yield to canter depart exercise that initially sort of broke my brain and then once I had successfully done it (and gotten one of the nicest departs and then adjustable canter circles EVER), I brought Ruby back down to a walk and just stared at TrainerB and told her she was a wizard, haha. OFC DH wasn't videoing then, so I yelled at him asked him nicely to film me doing the exercise a few more times. I need to work on my timing for changing the bend and asking for the depart, but when we got it right it felt SO GOOD! And really encouraged Ruby to stand up on that right side instead of overbending her neck left and letting the right side trail out into oblivion. Some outside videos below, and then two from the end of the lesson in the indoor below!

TrainerB is taking clients up to a show in Iowa next month the week after my birthday that she thinks might be a good fit for us - I dug up the prize list and the show itself is reasonably affordable (office fee and shavings are cheaper than the April show), but gas is the big unknown right now (plus I'd definitely have to get a hotel room)... sigh. Entries don't close until the end of the month so I have some time to think about it (or sell my organs on the black market, only sort of kidding). I'm unbelievably frustrated that I FINALLLLLLLLY have the time, coaching, and drive to start doing recognized shows and gas has fucking doubled in price making it impossible to GO to said shows (or lessons). Blergh. Plus I still don't know how/when I'm going to be able to use my Gifted Grant since TrainerB is no longer at the facility we based the budget on. I recognize this is a uniquely first world problem and I should just be grateful for all the opportunities I DO have, but just... damn.... Ugh. Anyway. I'm glad this was such a good lesson because it's going to have to tide me over for a while :( :(
Posted by TrainwreckInTeal at 5:30 AM