Last Sunday was another great lesson - broken record here, amirite? Ruby and I are both thriving with the regular eyes on the ground, and Ruby continues to be SO SO SO good and try so hard in our lessons. I still pinch myself that she's my horse! But I digress. Sunday was another solid lesson focusing on the basics of suppleness and relaxation, mostly working on Ruby completing a whole stride instead of getting on the forehand and getting choppy. She had to really let go of the tension in her back, which, spoiler alert, was caused by me holding tension in my back -- is anyone surprised? No. Of course not. 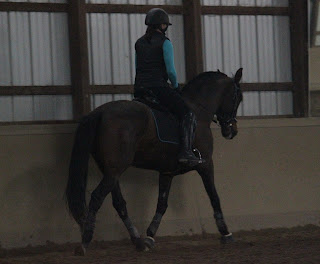 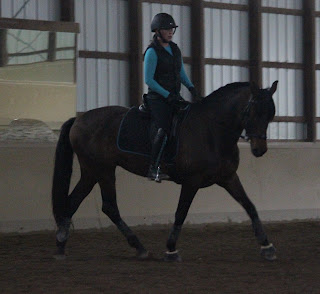 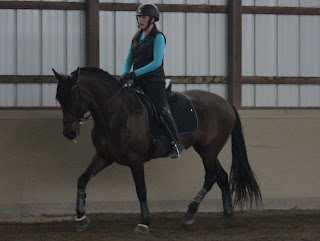 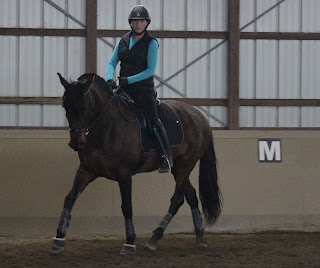 When we moved that work into the canter, it helped the canter departs... take longer, if that makes sense (it probably doesn't, I'm not good at explaining things lol). Instead of a frantic leap into the new gait, there was time for me to influence it. We had a few messy ones, but several quite nice ones! Of course, DH was too busy shoe shopping on Amazon to take any videos this day, lol.

After some work on the canter departs and maintaining the quality of the canter, we moved on to leg yields, and trying to replicate that throughness of stride while in the leg yield which we were.... not good at. No one is shocked lol. But once I stopped worrying about whether or not we made it to the letter we were aiming at and focused on the throughness, they magically got better. Why is dressage so hard? IDK but I'm an addict, haha. 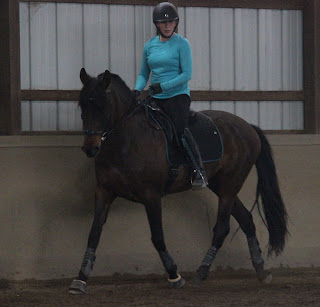 I really love TrainerB's teaching style and we were having a lot of fun in this lesson -- at one point she asked me to do something "nonchalantly" and without missing a beat I asked her if she's ever seen me do ANYTHING nonchalantly... lol. At least by now she's very familiar with my anxiety-addled lizard brain. We wrapped up with just working the maintain quality of trot down the long side without letting Ruby build up any speed, and we played the "just one more time" game about four times until I told her this is why I have trust issues. That was our last lesson for April, as TrainerB isn't available for lessons this weekend or the following weekend (which is fine since I'll be in KENTUCKY that weekend anyway!), so I'm looking forward to a few weeks of working on our own and then picking things back up in May to see how we feel for some of the later spring/early summer shows! Also looking forward to hoping hitting the trails this weekend, if anywhere is dry enough after the obscene amounts of rain we've been getting.... sigh.
Posted by TrainwreckInTeal at 5:00 AM