April at the Arch: Sunday

My Sunday ride times were similar to Saturday’s (although blessedly both AFTER lunch), so the morning was pretty laid back. I got to spend time with T (and Bob, who is THE CUTEST), and ended up both hand walking and lunging Ruby just in case she had pent-up energy from being stalled for the second straight day (she’s usually outside about 16-18 hours every day). She was pretty chill on the lunge line, but I’m still glad I got to give her a chance to stretch her legs. 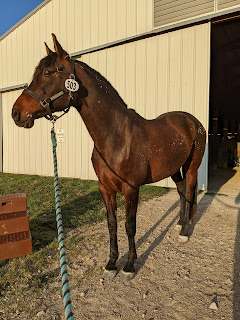 Saturday most of the rides from our barn had been pretty spaced out, allowing TrainerB to coach me through warm up for both rides, but Sunday we had more rides crammed together in the middle of the day in both the indoor and outdoor arenas, which meant she was there for the beginning of my warm up, but then had to leave to go coach one of the riders in the indoor. Things felt fine while she was there, but then once she left my lizard brain sort of shut down and panicked, and I set Ruby off into a tension spiral. Looking back on it is so dumb, because god knows 95% of the shows I’ve gone to alone, so it’s actually the opportunity to HAVE someone coaching me in warm up is still new, but apparently my brain wanted to use it as a crutch and then once she left I just… tensed up and made poor decisions.

T and several of the barn ladies tried to talk me down off the ledge and help me calm down but I was pretty much a wreck. For literally zero apparent reason, sigh. When I rode by to give the scribe my number, the judge yelled out the window of the truck "nice coat!" and I had a brief minute of wishing I'd been brave enough to wear the teal boots too (which were in the trailer incidentally, but I did not, sob). The first test went.... very poorly. And unlike when the test went so poorly at the schooling show last fall and I was able to laugh it off, I got sucked into an emotional vortex of feeling like a) I was letting everyone down, particularly my horse and b) like I had wasted huge amounts of money to come make an idiot out of myself. In retrospect, none of those things even make sense, because my horse literally gives no shits about numbers written on a piece of paper (although she gave lots of shits about me riding like a monkey haha), and it's not like I haven't spent plenty of money on dumber things, but I just.... dunno. Flailed. It was bad.
I didn't have a ton of time between my tests so I just went back to the warm up ring and schooled, and at some point I think TrainerB made it back down and helped sort of unlock my stupid brain and I started riding a little better.... not like what we're capable of in lessons, but at least it was better than the first test. I was able to go in for our last test and actually make some better decisions. Between the lunging in the morning and then a longer than usual warm-up before the last test, Ruby was tired, and she broke a few times at the canter when I didn't keep my legs on enough, so that cost us points, but in most other respects I was pretty happy with the test. She did the best she could for the ride she was getting, and we actually did get the highest of our scores all weekend on that test (which isn't saying much, it was a 58 and change). 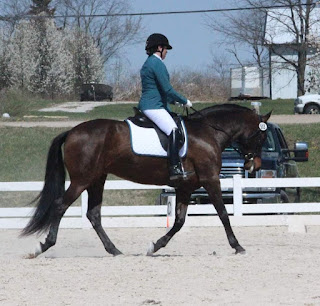 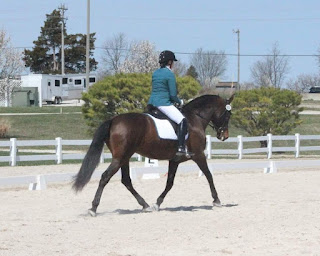 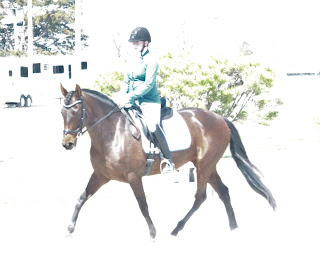 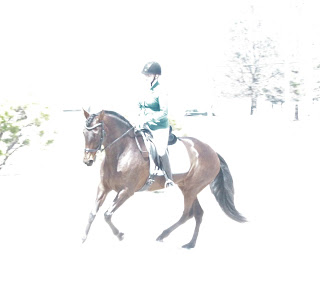 After everyone left (T had to get back on the road, my mom had somewhere to be, and DH had brought my MIL along and they wanted to get back), I got Ruby settled back in her stall and went to pick up my tests. I was still emotionally sort of wrecked from just.... a lot of stuff, and the comments at the end of my first test sort of pushed me past the breaking point and I ended up slinking off to my horse trailer to have a good cry. I still think the judge could have written her comments in a more productive way, but the implication was that I wasn't good enough to ride my own horse and that I was hindering her abilities.... which, is definitely not wrong, but for fuck's sake it was a MAIDEN RIDER class so you'd think the judge could have been just a smidge more tactful about it. She did note on the second test that we showed some improvements, but in my emotional spiral I just kept replaying the negative comments in my brain. I tried to pull it together before I went back to pack up my stuff, but clearly everyone could tell I was a wreck, and of course them being nice about it just made me more of a wreck. TrainerB was so very kind, although I'm sure she had way better things to do than babysit her newest AA client having an emotional breakdown for no reason.... at least I warned her beforehand that "horse show Leah" is an entirely different brand of neurotic than normal "lesson Leah", sigh. She sent me some encouraging texts that did really help me once I calmed down a bit. 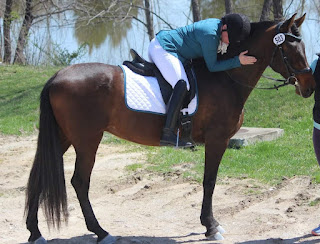 At any rate, I got all packed up and headed home at a reasonable time, offloaded all my stuff into the tack shed, and let Ruby have some well deserved time out in the pasture (wearing her muzzle of course). I've got videos of some of the tests for a post next week, some more thoughts now that I've had more time to reflect without being so emotional, and then I also wrote up a huge cost breakdown post because going into this some of the stress was the unknown factor of how much I was going to end up spending!
Posted by TrainwreckInTeal at 5:00 AM