Alright well a not-insignificant amount of you already know what my mystery package was (not that I tried terribly hard to keep it a secret, lol). A few weeks ago (wow it literally feels like forever but it wasn't!), Ruby and I had an appointment with an independent saddle fitter and we both fell madly in love with a Fairfax World Class. I didn't actually even HAVE a budget for saddle shopping when I showed up to the appointment, because I had what to me at the time felt like a perfectly acceptable, if not exciting, saddle. Cue spending several weeks doing nothing but obsessing about the World Class in my spare time, and annoying the ever loving daylights out of DH (and also my friends) talking about it (because fundamentally that's who I am as a human being, lol).

I also took the opportunity at Rolex (errrr, Land Rover) to talk shop with Mary a bit. For those of you who don't know Mary, she is Jen's saddle fitting wizard friend -- I feel like at some point Jen maybe shared how to get in contact with her for remote saddle fitting advice, but I am striking out on finding it, so if either of them wants to chime in in the comments, sweet. I showed her the pictures and then the Fairfax info about the saddle and she was excited, like in a way I don't think she generally gets about dressage saddles (see Jen's MANY MANY posts over the course of several YEARS about trying to find the right saddle for both her and Connor's build and preferences and how many of the popular saddle brands just cannot modify saddles outside a very set standard). I ended that conversation fairly elated, because she really loved the design -- I believe her exact words may have been "unconditional stamp of approval", but that could be the booze from XC day fogging up my memory, who knows, lol.
But as always, the stumbling block was the cost. Oh and also the fact that someone else at the barn bought the demo I was hoping to save up for (minor details, lolol). After many (literally countless, everyone was sick of me) heart-to-hearts with my friends and also DH, I decided to divert the money I had earmarked for arena footing/drag improvements this summer to a new saddle instead. I'm at a point where I'm serious enough about this that riding in a saddle that actively hinders my progress doesn't make financial sense - why keep spending $$$$ and time on lessons and shows and essentially spin my wheels (good analogy Kate!) when I know perfectly well this saddle will make things easier for both me and my horse. DH was actually way more on board than I thought he'd be - in less than a week he was commenting that he knew I was going to buy it (while I halfheartedly protested, haha), and then after I got back from Rolex and was sad someone else bought the demo he said "I don't know why you didn't just buy the damn thing that day and have it adjusted, it would have saved us all this trouble".... who are you and what have you done with my husband?! ;)

So, with the demo I wanted no longer available, and brand new still being out of budget, even using my arena upgrade money, I went back to the drawing board. The day after the fitting appointment, I found a demo for sale in the UK, but at the time the conversion rate made it comparable to the demo here, so it didn't make a ton of sense when I thought I could just buy a demo here. However, after the demo here sold, it got a lot more appealing! And the day I finally decided to bite the bullet and get it, the conversion rate had fallen even more and it made it cheaper than the demo here (we won't talk about how that savings got eaten up by a "foreign transaction fee" on my credit card and then getting bitch slapped by unexpected customs import fees, SOB). It felt like a sign :) so after confirming with my fitter that the specs were the same and that I could have her adjust it the next time she was in town, I BOUGHT IT. It originally was supposed to arrive Monday but got stuck in customs hell (seriously I've been in agony all week dealing with UPS and hoping for it to start moving again), but it finally arrived yesterday! Naturally the UPS man showed up like 5 hours earlier than I expected and knocked on my door right as my division director called on me in a meeting to give an update, but that's sort of how my life goes at this point so whatever lol. 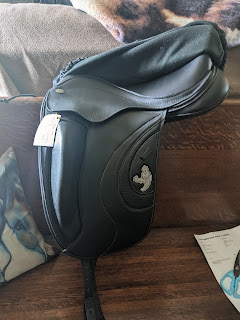 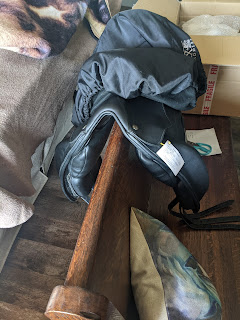 I literally just wanted to crawl into the box with it when I opened it. And you KNOW I immediately ran out to the barn at lunch to throw it on Ruby and take some photos to send Mary (and TrainerB!). And for the 'gram because let's be real, blogger here! 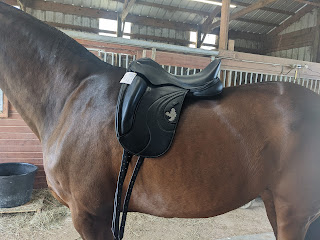 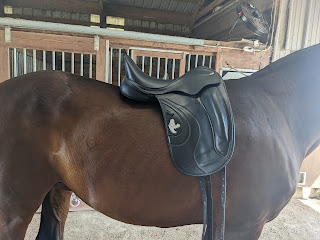 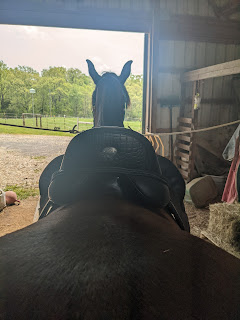 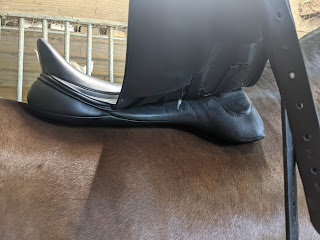 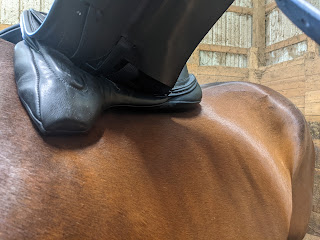 Mary was quite impressed with the fit right out of the box (that's a direct quote lol) - she thinks the back may need some padding to level out the seat, but I can address that with a shimmable half pad for now and see how I like the ride both with and without it. I have a lesson scheduled Sunday so TrainerB can see it, and then I will have the fitter look at it next time she's in town to make those little adjustments it will need to be perfect for us <3 (also venmo'd Mary some money for her time because it was SO worth it to me to have that peace of mind, I can't even explain). Of course it's literally hotter than HADES outside right now, but you know I dragged poor Ruby out to the arena to try it out last night anyway! Stay tuned ;)
Posted by TrainwreckInTeal at 5:00 AM