Saddle Fitting Appointment (aka, my horse has expensive tastes)

Thursday, the independent saddle fitter was coming to my trainer's barn, and I asked to be put on the list. I wanted to get an appointment the last time she was out, but unfortunately by the time I thought to ask TrainerB, the scheduling didn't work out, so this was the next time she was at the barn. Because of how many horses there were on the schedule, I opted to flex my work hours so I could come up in the morning, which seemed easier for everyone. I brought the Jorge Canaves Vienna II we've been riding in for about 95% of Ruby's under saddle career, as well as the Custom Advantage to see if we could make it work for her instead.

As I told my friends later, we had bad news, good news, and EXPENSIVE news. The bad news is the Custom Advantage spent about 20 seconds on Ruby's back before getting a definite no from the fitter. The tree is too straight for her curvy back. Sob. So, that's gonna need to be cleaned up and listed for sale. The good news, my Jorge Canaves Vienna II is a perfectly acceptable fit. It's not doing either of us any favors and isn't like.... AMAZING... but it's not hurting Ruby or causing any issues. Unfortunately, it's flocked with synthetic material, so the fitter couldn't do any sort of adjustment to the flocking. Since she had 70+ saddles in her trailer we decided to see if any other options would work better for us, and she asked me what my saddle budget was... Honestly I hadn't even gotten that far in my brain because I sort of assumed that bringing two saddles (one of which Ruby goes decently well in) that we would probably be able to make one of them work, but that was silly on my part, lol. I threw out a very small number but also told her I didn't mind her trying more expensive saddle models if she didn't mind if I shopped for one used and brought it to her to adjust (which she was fine with). I... should not have told her that was okay. You know where this is going.


The first saddle the fitter pulled out was a Kent & Masters. It's a brand I was at least peripherally aware of, although I'd never sat in one. They're not high end or fancy, but they're adjustable and wool flocked. We tried an 18" seat and I was swimming in it, but otherwise it wasn't bad to ride in. The blocks were different than my current saddle (or even the Schleese I used to have, which had MONSTER blocks), but I didn't feel like they were in my way. Overall it was sort of just a ho hum feeling. But the next saddle she pulled out.... oh my god. 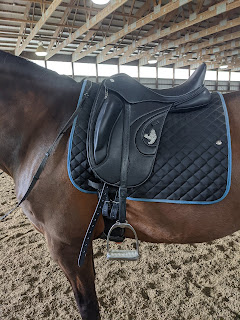 The next saddle we tried was a Fairfax World Class - it's one of their newer models, and it's what Charlotte Dujardin rides in (I told the fitter if it made me ride like Charlotte Durjardin I'd write her a check right there, IF ONLY that were how it worked lol). From the minute I got on, I knew I was in trouble. So much trouble. EXPENSIVE trouble. The clouds parted and the sun shone and the angels sang (okay not literally but it FELT like that). It felt amazing. The trot-canter transition (which is Ruby's favorite place to express feelings about saddles apparently), was effortless. My rogue right shoulder didn't go wandering around. I felt completely secure but not boxed in. My trainer asked me how it felt (I replied expensive) and she's like yeah I'm sorry about that but just so you know, that's the canter seat we're working for. SIGH. I got back off and the fitter said okay this one is $5K (cue me dying inside a little) but let me see if we can find something else that might give you the same feeling but more in budget.

We tried a Ryder (apparently a brand that works for one of the other Spanish horses in the barn), and that was an immediate no go for both of us -- not that they're bad saddles just the model she had did not work for us. Ruby was very inconsistent and wanted to keep popping her head up and I couldn't find my seat at the canter at all. We also tried a different Fairfax (one of their older models so easier to find used, a Gareth I think?), and it was okay it just... wasn't as good as the World Class, sigh.

So... yeah. I talked to my trainer a bit between saddles, and then to the fitter when I was paying for the consultation at the end. The fitter is so lovely, she completely understood the budget concerns, but had doubts about me being able to find one of the World Class models used just due to how new it is (she's not wrong I scoured the internet last night and had ZERO luck - mostly either sold already or higher than she had the demo priced at). She was willing to work with me a bit/accept payments, but it's still just... massively out of budget no matter how I slice it. Talking to my trainer was tough - I knew my original saddle didn't do me any favors (actually the three or four lessons I had in the Custom made it clear it was a much better fit for me, even though Ruby hated it), but I also hadn't actually experienced riding in one that fit ME well and how much easier that made things. I seriously felt like the Fairfax did more for my position in 5 minutes than 8 months of lessons (and not for lack of effort on my part or lackluster instruction, because my trainer is amazing). But this saddle just... put me where I needed to be and instead of focusing on both me AND Ruby, I could just focus on her. And my trainer could see that just as much as I could feel that.

There are some changes going on out at the barn (it was listed for sale last fall and I think the new owners close next month? It's hard to be in the loop since I'm only there a few times a month lol) so I might actually be taking a brief break from lessons for a month or two anyway, so if I could sell the Custom and throw my lesson/gas budget into a new saddle fund for a minute... maybe it would be doable later in the year? Or I could delay my planned arena footing/drag investment and divert that money into buying this saddle? Sigh. IDK. I guess I'll spend a week or two thinking on it and crunching numbers. And poking around the saddle vendors in KY next weekend. Oh and getting the Custom cleaned up for sale. If anyone local is in the market for a 17.5" Custom Advantage, hit me up... lol.