Ugh sorry this post is so late - I really did have good intentions of writing things up right away after the show (especially since I had FAB pro photos so quickly!) but ya know how that goes. DH is still extremely limited in what he can do post-back surgery (aka, zero of the outside chores and also minimal inside things) so I am burning the candle at both ends between home and work, and it's also my SUUUUUPER busy time at work, because of course it is. My scheduled day off Monday to combat the horse show hangover got cancelled last minute when I had to go have a working luncheon with the Lt. Gov - nbd O.o.
So you've probably seen a lot of these photos from my quick post-show recaps but you get them again -- sorry not sorry! Friday the show management was very clear we weren't allowed to arrive before noon -- Ruby had a 3 p.m. photoshoot and I knew I'd need time to unload everything, so I ended up bathing her at home in the morning, letting her dry while I finished packing my own stuff, getting on the road shortly before 11 (leaving myself time to stop and fill up with gas closer to the venue where it was WAY cheaper), and rolling into the parking lot right at noon on the dot -- success! (Also TrainerB rolled in right behind me lol). I got Ruby settled, unloaded my stuff and got it reasonably organized, and then hung out cleaning Ruby's bridle for the photoshoot/helping my barnmates get their stuff set up. 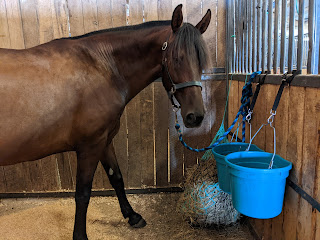 After I got Ruby settled for the night and everyone else had wrapped up, I stopped by Walmart for some essentials (more seltzers and snacks lol), grabbed a quick bite to eat, and then headed to my super sketchy motel to crash for the evening... which is a funny story. I was packing the night before and complaining about not wanting to drive back and forth but also not wanting to pay $$$$ for a hotel room, so my (very drugged still lol) DH decided to take matters into his own hands and book me a hotel room, and I found him later passed out in his chair with his phone and credit card in his hand on priceline haha. I decided not to look a gift horse in the mouth and finished up for him ;) the room was cheap but close to the venue, and despite being a bit on the dated/poorly renovated side, it was reasonably clean (the sheets were my biggest concern) and the A/C and hot water worked, which were really my only requirements, lol. I ended up tossing and turning for half the night, probably because I was so accustomed to getting so little sleep the weeks leading up to the show with DH's back, sigh. Didn't exactly leave me refreshed and ready for Saturday, but it was what it was!
Posted by TrainwreckInTeal at 5:30 AM