First Ride in the New and Improved Arena!

OK I do promise to finish my background posts, but I have so many new and fun exciting things I'd rather write about that I can't contain myself!

Today was a very productive day - DH and I got up at a reasonable hour to get some stuff accomplished around the farm. Earlier this week we powerwashed all the winter blankets, so this morning I packed them all away in their totes for the summer. We also played musical houses with some chicks DH hatched out (he has an unhealthy obsession with chickens that I'm sure will be featured in a future blog post) -- he got his current coop completely cleaned out, moved the juvenile birds into their section of the coop, and moved the baby birds into the brooder. A friend stopped by and bought one of Myles' horse head sculptures -- he is quite a talented welder and makes a few of these statues a year. His next project will be a semi-comissioned one for my barn manager out at Arrowhead Creek Stables (ACS) -- she has Arabians and wants one that's a little more "type-y" for a garden area in the works. 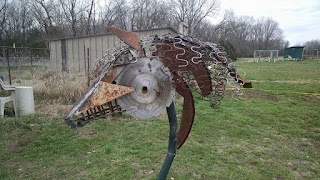 After all that, DH headed off to work. He's a lieutenant for our state Department of Corrections, so his work schedule is sucky in the sense that he works afternoons/evenings -- however, he is off three days in a row during the week, so that's nice!

I headed out to the barn to meet up with Jacki (Burn the Mortgage). Jacki boards with me out at ACS and is a fellow dressage enthusiast. She is kind enough to be willing to give me some pointers while I'm schooling Ruby -- God bless her, hopefully we manage to keep the retina-bleeding to a minimum! Jacki knew we finished the arena improvements yesterday, so we decided to take a field trip with Mort (her OTTB) and Ruby (my 5 y/o Azteca mare who will have her own post soon, I promise!). 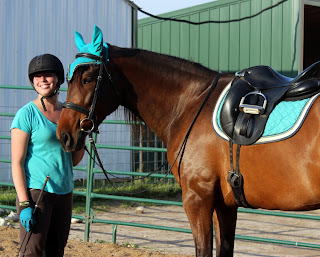 Since we've both recently started blogging, the goal was not only a productive workout, but to get some useful media (what's a blog without photos?!). I was also testing out a new bit, a Neue Schule Verbindend. I'm sure it will be the focus of a review post soon, after I get a little more time to test it out. Both horses schooled very well -- I'll let Jacki write her own post with photos, but I was quite happy with how Ruby worked in a bigger arena and paid attention even with my other three hooligans carrying on in the pasture next door. 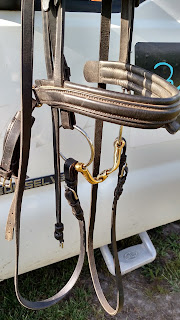 After we finished schooling, we let the horses grab some grass in my turnouts while we watched the Derby and played with some layout changes for our respective blogs. I need to sweet talk one of my Photoshop-inclined friends to help me make a decent logo and a better header -- I have some ideas, but I lack the talent to actually make it happen! So hopefully if you'll forgive the crappy design for now, I promise it will get better! 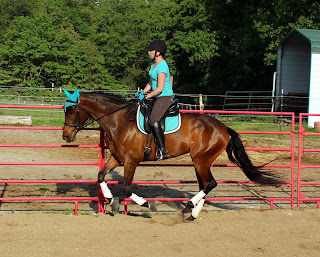 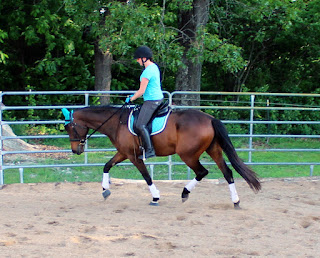 I'm sure from the photos today, you can see how I picked up the nickname that inspired this blog -- nothing makes me happier than extreme matchy-matchiness, especially in the form of teal and black, which are our farm colors for MyLeah Andalusians! 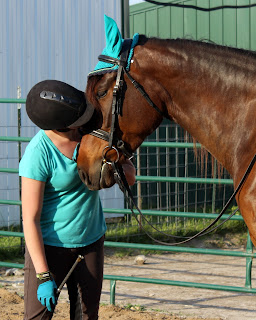 Posted by TrainwreckInTeal at 9:09 PM