I debated about designating this post as Tack Review Thursday, but I’m smart enough to know that I probably won’t be on top of things enough to do a tack review every Thursday. Knowing your flaws is half the battle, right? My first post is going to be about my favorite saddle pads ever -- which will come as no surprise to my friends who have dealt with my raving about how much I love these pads for the last year and my incessant sharing when they’re on sale. Oops?
At Ruby’s first show in November of 2014, one of the other competitors had a really interesting shaped pad, and I meant to try to chat her up about it. Being me, I got distracted and forgot, but I didn’t forget how much I liked the look of the saddle pad. I’m a very non-traditional Dressage Queen in the sense that I love pretty much everything except the typical English butler black and white formality of normal dressage attire. I find black and white boring. I love piping, bling, patent leather, non-traditional shapes -- if it’s weird and borderline unacceptable, it probably lives in my tack shed. I’d probably fit in much better in the eventing world, if I wasn’t piss-my-pants scared of cross country jumps. Or really jumping in general any more. But I digress.... 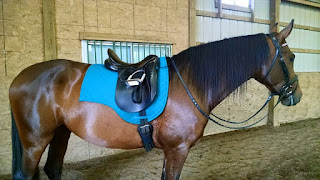 So I spent some time trying to find a similar shaped pad for dressage and struck out. Until a few months later when a Facebook friend posted pictures schooling a horse with an identical pad. Jackpot! I asked about the brand and was rewarded with a name -- HighPoint. After a few minutes of searching, I found several sites that offered them, and even had custom piping! I didn’t really *need* a new $50-60 saddle pad when I found them, so I just bookmarked the site and made a mental note to send it to DH around my birthday with the color options clearly spelled out. 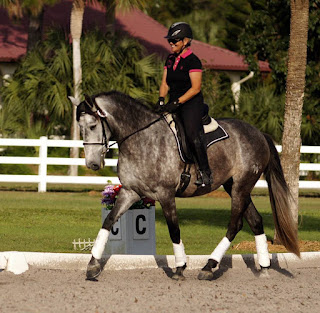 Pictured is Ramses WAE, a 2010 PRE gelding by Fugitivo XII (Cinna's sire) out of Eneida EDA (who is by Dominante XIX, who happens to be Ruby's grandsire). Ramses is owned by Terry Waechter of Watchman PRE Horses and trained/ridden by Shaana Herlocher Risley. Photo by Audrey Maschue.
As usual, my intent to be responsible and moderate with my tack shopping went completely out the window when Tack of the Day (aka the Devil’s website) offered them for around $20. I immediately placed an order for 3 -- black, white (at the time, I was showing a grey and a bay so I thought those would work for recognized shows, if we ever get to that point....), and TEAL! Clearly, the tack gods were smiling down on me and I was meant to own these saddle pads. 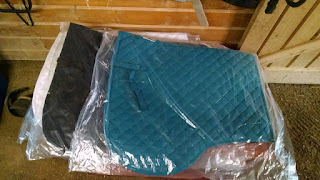 I really, really love these pads. In my opinion, the shape is so classy and flattering, and it looks good on a variety of horses. Topaz was a tank, while Ruby is much more refined, and I think it looked awesome on both of them (obviously, I am biased, but who cares?). They’re thin enough to use year-round but thick enough to hold up to some abuse. I just toss them in my regular washing machine (old top loader with an agitator) and they always come out looking great. The decorative diamond stitching did unravel a little on my first one, but you have to be really close to notice -- I doubt it could be seen from the judge’s stand, and it doesn’t have any effect on the integrity of the pad goes as far as daily use. 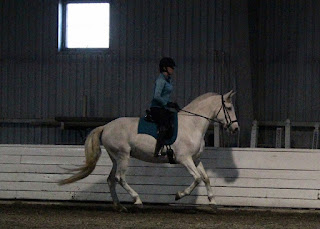 When TOTD recently ran them again, in even *more* color options, clearly I succumbed again. I now own a completely excessive amount of these pads in pretty much every color they offer. While you can get the fancy versions with custom piping for $60ish (from Little Saddler or Dressage Extensions), I’ve also discovered that HorseLoverz stocks the basic ones for $24.99, which I think is an acceptable price for a fun and flattering schooling pad. I’m not sure what’s up with the price difference (unless maybe the $60 ones are a little heavier?). I’m saving my white and black (and white with black piping) to be my “recognized show pads” (a girl has to have goals!) and plan to use the rest for schooling, schooling shows, and clinics. I’ve seriously never used one on an outing and not been complimented on it. If you read my clinic recap earlier this week, one of the first things the clinician said to me was "I love that pad!" And I’ve lost track of how many people I’ve referred to websites that sell them, and when TOTD runs them on sale I typically post about it and tag tons of friends. I should probably ask HighPoint to sponsor me.... haha.

Price: 5/5 stars (TOTD and HorseLoverz FTW!)
Quality/Durability: 4.5/5 stars (I wanted so badly to give them 5 stars, but the unraveled stitching does kind of suck a little)
Color Options: 5/5 (anything that comes in teal gets 5 stars from me)
Posted by TrainwreckInTeal at 6:12 PM