Getting to Know Me

I guess the most logical place to start is with me - although I didn't grow up with horses, they're in my blood. My mom moved to Hawaii at the age of ten when my grandfather, a meteorologist for the Air Force, was stationed on the island of Oahu. She was an avid pony clubber, competing in everything from western pleasure to 3-day eventing. She moved to Missouri when she married my dad, where she bought and trained a Quarter Horse by the name of Mr. Ranger Rick. Although she sold him when I was born, we kept in touch with his new family and some of my first rides were on his solid, steady back.

Growing up, I begged, borrowed and stole rides wherever I could find them. I showed in lots of local fun shows, ribboning in everything from halter to English and Western Pleasure, with a lot of trail riding in between. Although I had very few formal lessons, I spent every moment I could in a barn - so it was no surprise to anyone when I spent every last dollar of my graduation money on an 11 y/o OTTB named A.J. Steel (who I promptly renamed Jack). 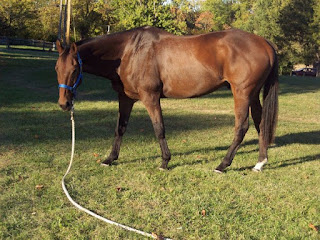 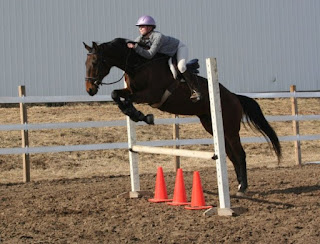 During my time at WWU, I met my Dear Husband (DH) Myles - although he took some lessons and rode in the occasional show as a kid, he hadn't been around horses in years. I promptly changed that, introducing him to Jack and my second horse Jasper, a lovely NSH who had fallen on hard times. With two horses, we decided keeping horses at home would be cheaper than boarding, so we purchased 17 acres of pasture and proceeded to start turning it (slowly) into a horse property.

The summer I graduated from WWU, I had the opportunity to purchase two Iberian mares, and my life was forever changed. Topaz and Tres (who will have their own blog posts) opened up a whole new world for me, and I never looked back. Both mares showed an affinity for dressage, so I retired my jumping saddle and headed for the world of black and white - becoming a dressage junkie along the way! 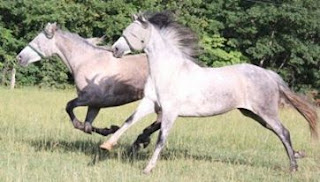 The name of the blog is entirely tongue-in-cheek, in case that wasn't glaringly obvious - my farm colors are black and teal, so I jump at the chance to outfit my girls in those colors at shows, clinics, and everyday life. At a dressage schooling show a few years ago, the show manager referred to me as dressage Barbie (my mare and I matched very nicely in entirely teal and black attire) and the nickname seemed perfect for my foray into the world of blogging. 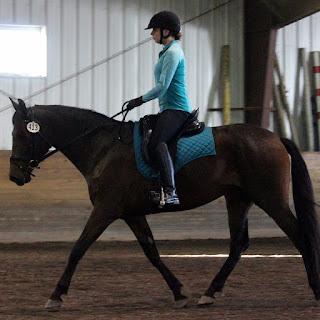 The first handful of posts will probably serve to introduce you to the many horses who have crossed my path in the last few years, and then I'll get down to the nitty gritty of my daily grind!
Posted by TrainwreckInTeal at 5:54 PM

Email ThisBlogThis!Share to TwitterShare to FacebookShare to Pinterest
Labels: about me, Background