Well obviously you now have a basic idea of who Tres is (well, you do if you read the previous two blogs!) but here is her life with me in a nutshell.
When I bought her at age six, she was halterbroke. She’d spent some time with a trainer as either a three or four year old, but the trainer sent her home because she wasn’t mentally ready and wasn’t retaining anything. I see a lot of that in her daughter, so I’m guessing it just must be a slow-maturing bloodline? After her smashing success at Nationals (haha) she came home and competed in some rail classes with me, and then another show with the dressage rider who was helping me work horses at the time. 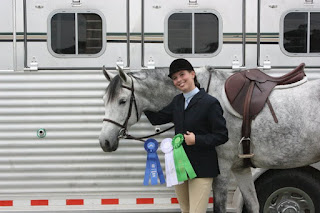 I intended to continue showing her the following spring, but fate had other plans -- this one definitely merits it’s own blog entry, but through very interesting circumstances, I ended up with the chance to breed her to Qualified stallion Fugitivo XII. So in the spring of 2011, Tres was bred, and then took a several year hiatus from saddle work to foal out and raise a baby (Cinna -- who will get her own post!). 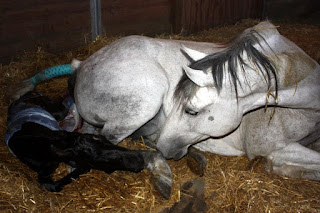 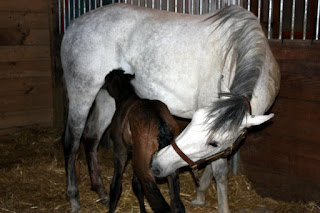 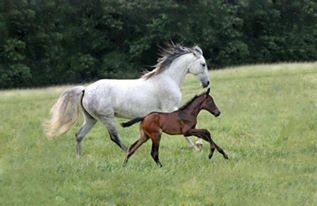 After hanging out in my pasture for a while, we decided to put her back to work. Another local dressage rider started working her with the intention of showing her at a WWU dressage show. We rode together almost every evening in my “dressage arena” -- which at the time was a reasonably flat grassy area that my husband outlined with flags and spray paint, with dressage letters spray painted on trash cans. We’re so classy, ya’ll. They rocked some Training Level, and she went back out to pasture. I had way too many horses and not enough time to ride, so poor Tres was constantly put on the back burner. 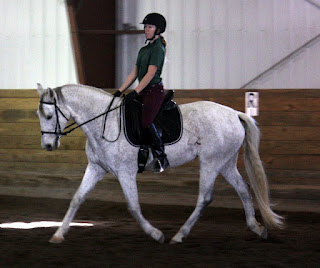 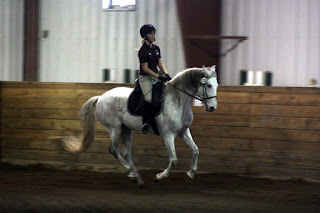 Part of the reason the previous owner sold me the girls at such a reasonable price was that she recognized that she would never be able to use them to their full potential -- so we agreed that if the same thing ever happened in my life, I would make every effort to find them a great new home where they would be used. After some soul-searching and many conversations with DH, I admitted that I wasn’t really using Tres to her full potential, so I put her on the market. Selling horses isn’t for the faint of heart -- I dealt with sooooooo many tire-kickers and absolutely inappropriate potential buyers. I feel like I could write an entire blog post about bad buyers (and probably will, when I run out of other things to write about, haha). 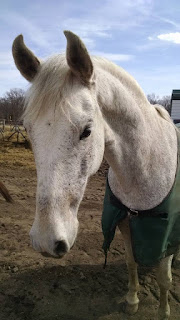 I had more or less given up hope of ever finding the right home for her, and resigned myself to the fact that she would be a pasture ornament forever.... when fate, as it so often does, intervened. This winter I was contacted by someone who seemed to be the perfect fit. After several lengthy conversations and a successful test ride and vetting, Tres left this past March to her new home in Arkansas. She is now owned by a rider with a background in foxhunting and classical dressage, who has plans to continue Tres’ training (and possibly breed her for some more lovely babies!). I couldn’t be happier to get to watch her progress, and I’m so blessed that I got to be one of the stops along her life journey. 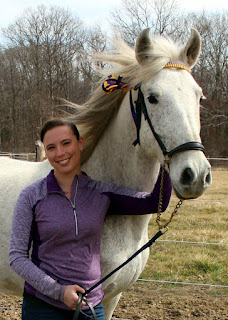 Posted by TrainwreckInTeal at 7:36 PM