Mr. Sandman, Bring Me A Dream!

Only a week in and I’m already slacking on the schedule I set for myself to post new blogs -- color me unsurprised! I do have several drafts in the queue but I haven’t gone through and done final edits and added photos yet, so nothing got posted last night. It’s just more boring background stuff, so I’m sure you won’t mind if it’s a day or two late!

In the interim, I decided to write about something current - yay! We purchased our property in 2009, and, at the time, it was 17.5 acres in a combination of pasture and woods (with a historic church and graveyard on one section, but that deserves a separate post). We have been making improvements slowly but surely, starting with fencing, building a barn, adding stalls, building a hay shed, putting up a round pen, having a pond dug, etc.
Last fall, we decided to bite the bullet and build an outdoor arena. As with everything we do, we were on a budget -- requiring us to be a little creative. DH spent weeks researching arena footing/foundations/drainage, and we came up with a plan that fit our space and budget constraints. There was spirited debate on the size, but we finally compromised on 70 x 120 (I wanted it to be dressage regulation small size, but I lost that battle by 12 feet - however, I got the width I wanted, so I can finally ride true 20m circles, hooray!). And we do also have some room to extend it lengthwise in the future if the money tree I planted in the yard grows....
Our soil is very clay-based, so it tends to hold water (in rainy years, I’ve actually had tadpoles mature into adult frogs in puddles in the yard). We decided to place the arena in an area we had previously been using as a dry lot for the past 5 years. One of the reasons we chose that location was that heavy traffic from the horses had compacted a lot of the clay, and most of the topsoil was very easy to remove. We also had the advantage of knowing where the “problem areas” (low spots that held a lot of water) were. Also (but probably most important), it was really the only open area that was large enough for the arena size I wanted that was also fairly flat already, so less leveling work to be done.

DH’s coworker has a bobcat, so they worked out a trade and he got to work. First job was to scrape the topsoil off and level the clay (to the best of his abilities) -- luckily DH is VERY, very handy and had some construction experience, so he did a credible job at this. Next, we had 14 loads of limestone screenings delivered for our base. The truck drivers were pretty good at “walking it out” when they were pouring, which helped -- less work for the bobcat to level it later! 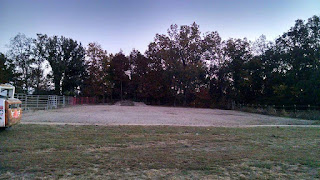 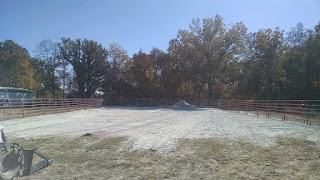 Next, we got it fenced off. Being on a budget, we decide to fence most of it with round pen panels -- we had two complete round pens already, so those became the perimeter for three out of the four sides. For the front fence, DH installed two large gates (easy access for the tractor to drag it and for future dump truck loads of footing) and then the rest was done in cattle panel topped with wooden boards (materials we had lying around already). He also built a homemade drag that worked quite nicely last fall to keep the limestone broken up. It rode very well for a few weeks, until DST and my long commute joined forces to make sure there wasn’t enough daylight to ride in by the time I got home from work. 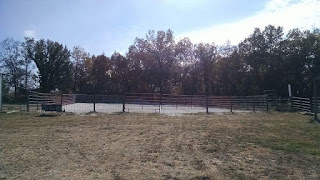 After a wet Missouri winter (it felt like it rained every day in December) the limestone base settled very well. Part of our initial debate last fall was whether or not we could keep the limestone broken up enough to ride in without a very expensive drag, or whether we would need to top it with sand. This spring we experimented with a few different ways to drag it, but finally decided sand was a necessity. Yesterday, the first four loads of sand were delivered, and today we are scheduled to receive another four. Operating under the knowledge that it’s much easier to add more sand in the future than take sand out, I wanted to start with eight loads and see how that settled before I had any more brought out. Not a fan of super deep footing (nor do we have appropriate equipment to drag it), so we’ll see how it rides this weekend!

Posted by TrainwreckInTeal at 9:41 AM