To Cut or Not To Cut?

This weekend was about a 50-50 split of barn things and normal human things - which is pretty good for me! I'm kind of all or nothing -- so either I spend every minute at the barn, or I don't go out at all. I'm working harder to try to find more balance in my life, which isn't necessarily the easiest thing to do when I have four horses.... but at least it's easier now than when I had seven?


Yesterday morning I dragged my happy butt out of bed at a reasonable hours to get chores done so I could squeeze in a workout with Cinna (who needs her own blog post, but I digress). She was pretty good for the first half, but about the time I was ready to call it quits, she threw a temper tantrum, so then we had to keep working until we reached a nice point to stop at. Even though she's almost four (her birthday is Tuesday come to think of it!), mentally she just can't handle workouts longer than about 20 minutes. The trick is to find a good point about 20 minutes in to stop at -- I'm about 50-50 for putting in a nice workout and then stopping at a good point. But on the plus side, she's getting used to leaving her "boyfriends" and cross-tying nicely like a grown-up, so I'll call that a win!
The evening was dedicated to much more fun events - Jacki's wedding! It was at a lovely winery venue overlooking the Missouri River. The weather in Missouri in mid-May can be hit or miss, but it was beautiful! A little breezy and chillier than last week, but that was infinitely preferable to the hot and humid nastiness that Missouri is capable of! DH and I drank way too much delicious wine, danced in what was probably an embarrassing fashion, and had fun making new friends. It's very rare for him to have a weekend night off, so we made the most of it and had a great time.
Today was another productive day - some arena work and a trail ride for our geldings (Jack and Trigger). Since our back pasture was empty, I did something I don't do often -- I let Jack gallop full speed for a bit. It's his favorite, but I try to stay cognizant of his age and fitness level, so I haven't let him do it under saddle in ages (obviously I can't control him in turnout if he wants to run like a loon, haha).

I had barn chores to do out at ACS this evening, so I headed over a bit early to squeeze in a mini spa session for Ruby. She was rubbing her tail a little last week and so I wanted to make sure she got a thorough scrubbing in case it was the dirt making her itchy. While she was drying, she got to test out the new "grazing paddock" -- she was a big fan, and actually ran away from me when it was time to bring her in for dinner.... what a goober! 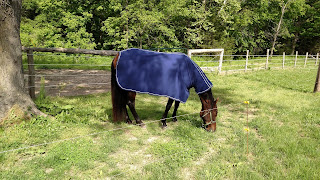 Which brings me to the title of this post -- I'm debating about cutting her mane. I know one of the things people identify Spanish horses with is a long, flowing mane. Technically, Spanish tradition requires mares to have their manes clipped off (essentially roached) and their tails partially shaved. Personally, I think its a pretty fugly tradition as a whole (although there are a few mares that I've seen rock it). When she was younger, Ruby's mane was incredibly thick, and she had a full mane on both sides of her neck. As she's gotten older, it's gotten a lot thinner (lots of that is probably my fault, I'm not that interested in excessive hair care). It's getting to the point where it's annoying to running braid at shows -- it's probably also not helpful that I suck at running braids, haha). A few years ago when I was in the same boat with Topaz, I had it pulled to dressage length and I LOVED how it made her neck look. So I'm thinking about making that leap with Ruby as well! What do you think? Leave it alone, or trim/pull to dressage length? If it will sway your opinion, I have some FABULOUS blingy dressage braid bands I could use if it was shorter........ 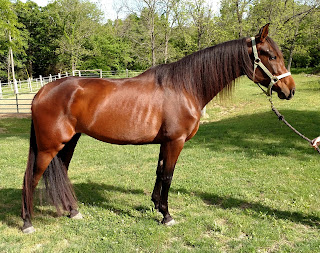 Posted by TrainwreckInTeal at 5:34 PM