Trigger will probably get a little short-changed in his blog post, mostly because he’s not really “mine”. After moving to our new property 6 months before our wedding, I started casually searching for a good horse for my DH to ride. Although he was becoming more confident on the ground with my rather spastic horses (going from not being around horses to having to handle an OTTB and a half-Arabian was baptism by fire for him!), I wanted something very steady Eddy for him to actually ride. He is 6’4” and at the time was having some back issues, so I figured something gaited or a big solid QH would be the way to go. 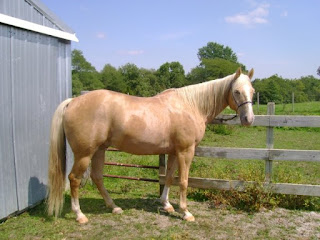 Between setting up the property and the wedding, obviously we weren’t rolling in dough - so I kind of figured we’d end up with a project that I would have to finish out for him. I struck out at finding him anything gaited (I also didn’t realize how small most of those horses are!), so I switched the focus to stock horses. Luckily, a friend was able to hook me up with a QH who had some behavioral stuff going on that I was willing to deal with, and we brought him home that fall. 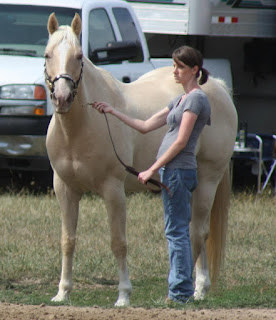 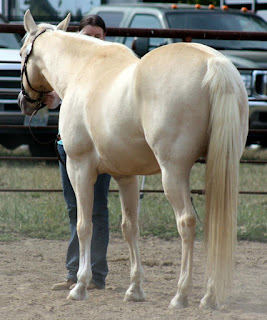 Trigger is a gold champagne Quarter Horse (although 90% of people call him palomino and it’s just easier not to correct them/explain) who is broke broke broke. He obviously had a great foundation at some point before he ended up with us, but he is the kind of horse who is willing to expend just a little bit of energy being naughty in hopes that it will get him out of further work, so he tends to bully inexperienced/timid riders/handlers. He quickly learned that shenanigans would not be tolerated, and ended up being the perfect husband horse/spare horse for friends to ride. He and DH didn’t hit it off in the beginning, so he spent some time leased out to my mom, one of her friends, and a local lesson barn to stay in work (because I find nothing more annoying than a well-trained horse languishing in a pasture). Last spring I had to bring him home from the lesson barn because they were doing an inadequate job of caring for him -- and during his rehab, he and DH actually bonded.
Last summer DH spent every spare minute riding (actually motivating me to ride when I didn’t feel like it), and while I was a little startled at the 180 about-face, I totally embraced it! While helping him match his tack and work on equitation was a novelty, I really enjoyed increasing the amount of time we spent together. And when he decided he wanted to show, I got to be “horse show wife” and cheer him on from the rail as they brought home their first blue ribbon in a local fun show’s walk/trot class. Although his work schedule means showing isn’t something he can do regularly, we do hit the trails as much as we can, and he also schools in our arena while I work other horses. 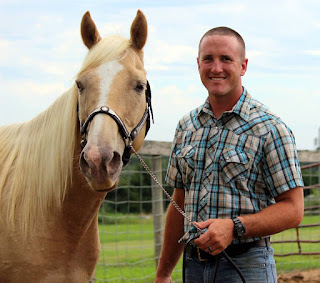 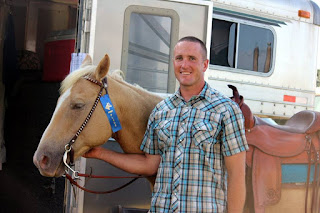 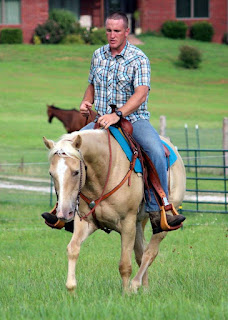 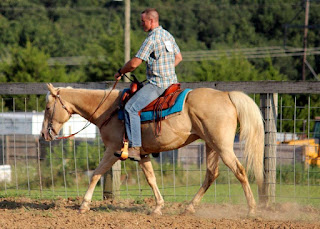 Many of my friends are openly jealous of my having a husband who is so involved with the horses -- I know I’m very lucky that even before he was this invested in riding, he was still supportive of my dreams. And I try to return the favor as much as I can, supporting him in his endeavors ranging from going back to school online, gardening/canning, raising inordinate numbers of chickens, and so much more. I think one of the hallmarks of a healthy relationship is supporting the other person’s dreams and doing your best to make them work, even if it’s not something you personally understand -- and I’m exceptionally grateful that we’ve been able to travel this road together. 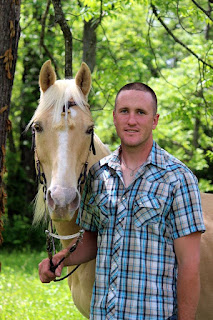 Posted by TrainwreckInTeal at 5:41 PM