What a weekend! Friday night was the tack auction I frequent every month (or every month that I remember, haha). I met a friend and we drove up together, along with her trusty canine! We got our numbers, and settled in for a night of entertainment. 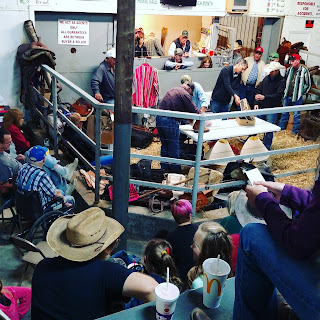 We both had some good "scores" -- my personal favorite was a random "lot" of stuff that ended up containing 5 jowl sweats, a cantle bag, a rain coat, a personal misting system, a hackmore, a nylon halter/bridle combo, two of those plastic number holders with the number books, a nylon attachment for your bridle to use with a lunge line, a saddleseat martingale, 3 SMB-style boots (a matched pair, and a random one lol)... For a whopping $2! I ended up trading the number holders to the lady in front of me for a cute sweatshirt (see below), and I've got plans to sell most of the other stuff to friends at the barn or on consignment at the local tack shop.
I also bought some heated buckets (even if they don't work, they were cheap!), and the score of the night: a teal pitchfork!!! (I have a serious problem, I need teal addicts anonymous meetings....). We stayed until they started selling horses, then headed out. Watching the horses sell is just too dang depressing.

Saturday the weather was BEAUTIFUL. Sunny and mid-70s. So lovely out. Our local saddle club was having a fun show, so I tossed Cinna on the trailer and headed over. This was her second "official" outing (aside from trips to the barn for the farrier). I wanted her to spend some time tying to the trailer, since we didn't do that much at her first show. Despite my verbally mocking her at the show for being a "demon baby", she was actually quite excellent. She loaded/unloaded like a champ both ways, and even hung out quietly on the trailer for a few minutes when I first arrived at the showgrounds and waited to unload her. She walked around the grounds and checked out everything reasonably politely, and then walked in the ring. I trotted her in hand a bit (like I would for a halter class) and then made her come back and stand in the arena for a while. She was much more settled than she was at her first show. Even though these showgrounds are near an airport, and we were buzzed by small planes numerous times! 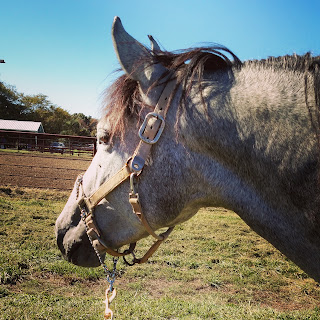 After the show started, I tied her to the side of the trailer and settled in to wait for a bit. The first half hour I had to stay pretty close to her, but soon I moved over to a friend's trailer (about 40 feet away) and sat with some friends while Cinna hung at the trailer and ate hay. She got bored and snotty a handful of times (she learned how to paw from her momma, dang it!), but she always quieted back down. She only got agitated enough to pull back once, but when she hit the end of the rope she thought for a minute and then stepped back forward.
I was on the fence about trying halter class again, but in the end the timing decided it for me. The costume class at the beginning of the show took up quite a bit of time, and about the time I needed to be leaving to do chores, they were starting the halter classes. I didn't want to rush through halter and then throw her back on the trailer and leave, so I decided not to show. I think that was the better decision, because then the entire experience was very low-key and low-stress for her. After I took her home, I headed out to the barn to do chores and snuggle Ruby a little, then back home to do adult-y things (laundry and dishes, boo).
Sunday was another absolutely gorgeous day... but unfortunately, I didn't really get to enjoy it *whomp whomp* my mom texted me Friday to tell me she had a water leak -- thankfully she caught it pretty early when she noticed water bubbling up from the ground where it shouldn't be, so she shut off her water. Sunday we headed over, shovels in hands, to try to find and fix it. Luckily, it was right under where she spotted the water (she had the forethought to mark the ground before she turned the water off). Of course, the line was about four feet deep, so it took us a while to get there! We headed off to the hardware store to get the materials to fix it, got all the pipes sorted out, and then just had to wait for all the glue to dry before turning the water back on (forgot to get a picture of the repaired pipe, oops! 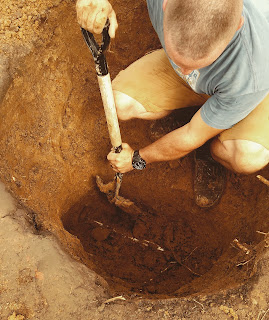 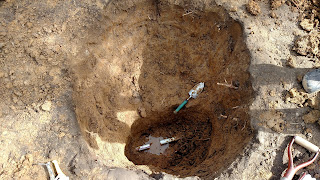 The hardware store also had LED lights on sale, so we made an impulse buy to upgrade all the lights in our barn and lean-to (well, DH can't count so all but one of the lights got replaced, lol). The annual cost to run these lights if you leave them on for 3 hours a day (every day) is less than a dollar! Is this how you know you're an adult -- getting excited about low energy light bulbs? At any rate, we got them swapped out, and the barn is actually a lot brighter! It seems like a much "harsher" light (as opposed to the previous lights we had, which were "warmer"), so hopefully we get used to it. I do know that Cinna is not a fan -- she stopped dead in the doorway when I brought her in for dinner and you could just see the "WTF?" look on her face.... she kills me! Today I am off work (thanks Columbus!) and we have big plans -- hopefully I'll be able to write more about that tomorrow or later this week!