So we had a fairly successful show on Saturday -- which if you follow me on social media, you already know.... sorry, I have no patience! While the original show was fairly large (40 some odd dressage rides I think?), the rain date was significantly smaller -- some other jumping shows pulled away quite a few of the CT entries, which was a shame. However, it made for a much shorter day, which I will never complain about!
I was up pretty early and off to the barn to pick up Ruby and one of her barnmates, who was being shown by a fellow boarder. We left in plenty of time, stopped to pick up some snacks, and were off to the show venue! It was a pretty easy drive, but the turn into the venue's driveway is a little tricky -- Saturday it was made trickier by the fact that a car decided to drive right up my ass the entire gravel road, and then proceed to sit on my bumper as I attempted to navigate the tight turn with my long truck and even longer trailer. I was a little too close for comfort to one of the fence posts, so I decided to back up a few feet to make another go at it. Of course, the dipshit in the car behind me starts honking because I guess they thought I couldn't see them..... no, I can see you, you asshats, you just need to back the eff up because nobody is getting up the drive until you give me some more space..... ughhhhh. So that was more than a little annoying. I really debated walking over to their car after I parked to have a discussion about driving etiquette when following horse trailers, but I decided it probably wasn't worth it.
After we picked up our numbers, we got the horses off the trailer and situated with their hay nets. Due to the lower entries on the rain date, rides weren't starting until nearly 10 a.m., giving us plenty of time to groom, put the final polish on some tack, chit chat with other CDCTA members, etc. My favorite kind of show day! My show buddy asked me to read her test for me, so I hijacked a Pony Clubber (and her mom) and handed over my camera, with some basic instructions on how to use it. That was probably the best choice I made all day, as those kids had a BLAST with the camera, and took some great pictures. Of course, then I ended up with almost 2,000 images to sort through and edit, but that's a story for another post... haha. My show buddy had two very successful rides, and was quite pleased with her first show since she moved to Missouri! In her second test, she overcame a big spook, but kept her cool and rode through it, and finished up with some super nice moments! 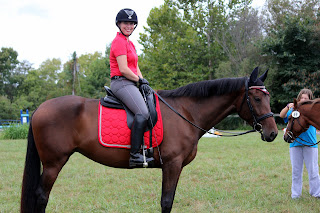 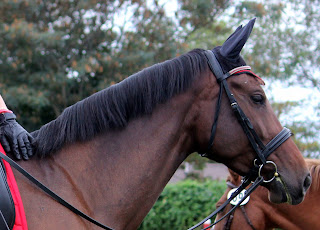 Ruby's time off definitely showed in the tests we put in, but since it was such a small, low-key event, that was okay. Her first test (Training 1) I rode with a whip (something I do schooling quite frequently, but rarely at shows). I'm not sure if that was her major dysfunction, but our first centerline was AWFUL and she absolutely refused to halt. She kept side stepping, so by the time I got her to settle all four feet on the ground, we were probably eight feet off of centerline. Not a great start..... She intermittently refused to stay on the rail, and was overall just kind of a little shit. We made it through the test, but it wasn't terribly pretty. Unbeknownst to me, I guess everybody was really having tests like that -- I spent a lot of time at my trailer and wandering around talking to people, and not much time watching, but apparently centerlines were hard on everybody Saturday. I guess I should also add that this is probably only the third or fourth test I've ridden in my life without a reader -- that was one of my big goals for this year, to work on being able to ride without a reader (since sometimes it's hard to find one!). 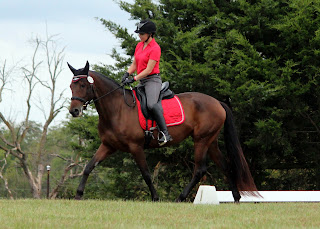 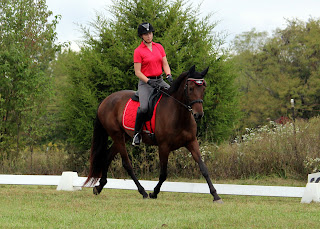 It was good enough to net us a 65 and change, and win the class of three. I didn't know that until after the show was over, so in between tests (I had about 20 minutes), I took her back to the warm up ring and we had a bit of a come to Jesus. We practiced our halts, over and over again, as well as better bend and more prompt canter departs (something else sticky in the first test). Both the dressage ring and the warm up were in grass rings, and not terribly level. I am not a footing princess, so that didn't bother me at all, but Ruby wasn't paying enough attention to her feet, and kept tripping. She was also quite on edge in the warm up -- not sure if it was the sections of unmown grass, some bushes and trees, or the fact that the jumping portion of the CT was happening on the other side of one treeline? Regardless, she flipped me the bird a few times when I asked her to do things, so I gave up on the show and figured we could just use the time to school. I've shown under this judge before, and at the last show she judged, Ruby was also quite looky, and in my comments she wrote that she'd rather see me get after her for inattention than just be a passenger, so I decided that was how we'd ride test number two. 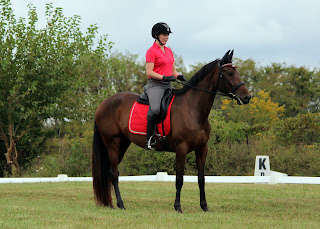 Training 3 was the second test we rode, and frankly, it's probably the test I've found most difficult to date. Last fall with Topaz, my first attempt at T-3 was the first and only time I've gone off course -- even with a reader. I practiced it a few times with Ruby in the last few weeks, and I felt pretty confident that I had it memorized. I'm not sure if it was our schooling session that helped, or just my attitude adjustment, but our first centerline was pretty good. Our halt was solid, with none of the stupid dancing off like the previous test. So even if the rest of the test was a disaster, I felt good about that! The rest of the test rode pretty well -- only two sticky moments. In our right lead canter, she broke before she was supposed to, and when I asked her to pick it back up, she picked up the left lead. By the time I broke her down again, the test called for trot, so I just wrote that movement off and tried to look forward to the next one. Unfortunately, it rattled me a little and I forgot what the next movement was -- I thought it was a trot loop, but I needed to stay on the rail until my stretchy trot circle at B (or E, I can never remember which side is which, haha). So I sent her off the rail, then realized my mistake and swerved back to the rail. There may or may not have been some audible swearing, but I didn't get marked down for use of voice, so yay for small miracles... haha. Her stretchy trot circle was actually pretty decent, and we ended the test well. It was good enough for a 67 and change, making us the Training Level champion (I was the only person who rode more than one training level test, but shhhhhh, I love SATIN!). If I hadn't sent her almost off course (we got a 3.5 for that movement, luckily not an actual error), I think we probably could have broken 70% on that test, so I was kicking myself quite a bit when I read the test later. Oh well, at least pilot errors are probably the easiest things to fix! 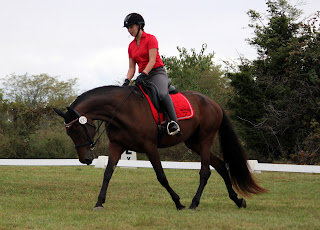 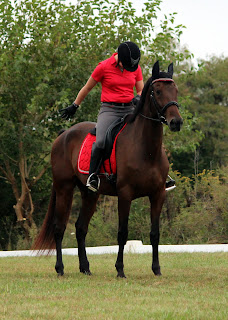 The judge and I were able to chitchat a minute after the show (my T-3 ride was the last of the day), and she had some very kind things to say about Ruby's maturing (last time she saw us was last fall). She also had some nice things to say about our potential once I'm able to get Ruby working more over her back, and I'm really hoping to organize some mini-clinics with her out at the barn this fall! 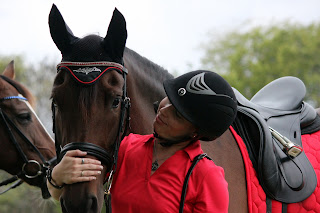 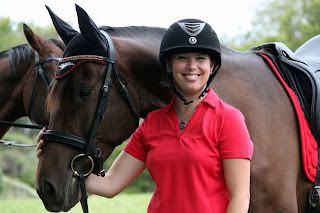 Everyone else pretty much cleared out during my last ride (since it was the last of the day), so we were the last to leave. We had a nice leisurely drive home, unpacked the trailer, settled the horses, and I finished chores both out at the barn and then at my house. I attempted to stay up and sort through photos, but I passed out on the couch, so that was a no go, haha. I did get through at least MY photos on Sunday (because let's be real, those were the most important ones to me lol), and also managed to get my house cleaned up! We have a friend stopping by today, so I can't promise much of an update tomorrow, but I do need to share with you the hysterical little GIF EventingSaddlebredStyle made for me of Cinna's little scoot across the arena when I was goofing off on her bareback last week. Stay tuned! 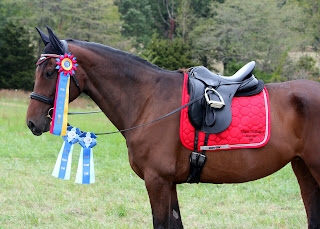 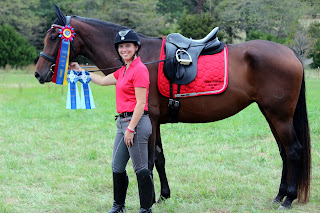 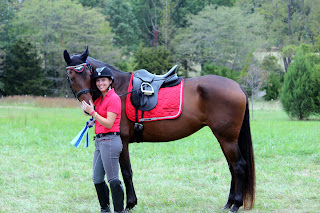