Yay, plenty of fun things over the weekend so lots to write about! With accompanying media! Aren't you lucky, dear readers?? :)
Thursday night was the night of my Horze vs. Leistner brush showdown, and I also snuck in a decent ride. I filled out entries for the last schooling show of the year, and I decided to stick with T1 and T3 again since I pretty much have those tests memorized and don't have to deal with memorizing another one -- and I really don't like T2 because of all the random diagonals. Ruby was excellent -- we even worked a tiny bit on some baby trot lengthenings. All the hacking out one the trails and hill work is helping her get fitter (especially since she had so much time off over the winter with her eye shenanigans).
Friday night I took a lengthy trail ride with another boarder. We did lots of trot and canter work, saw a ton of wildlife (foxes and deer), and had an all-around fantastic time. I'm trying to squeeze in as many of those rides as possible before we totally lose the daylight in the evenings. I love my job but every fall when that hour-long commute means there is no chance for me to ride in daylight, I get really grumpy and contemplate how on earth I could manage my finances to be a stay-at-home horse mom... obviously can't afford that right now, so off to work I went this morning, haha. After we got done riding, my friend came back to my house and we enjoyed some alcoholic lemonade and a soak in the hot tub -- it's only been functional for a week and I already can't imagine not being able to soak in it after a long day! 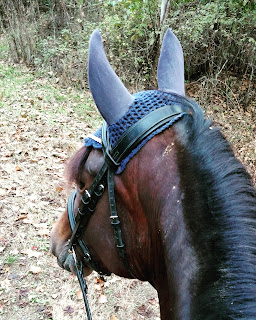 Saturday was was pretty low key -- chores at home and at the barn, but I did get to spend some time hand-grazing Ruby. So much of my time is scheduled down to the minute that it's nice sometimes to just kick back and sit in the grass with her. I also spent an ungodly amount of time sacked out on my couch covered in dachshunds, catching up on TV shows (my DVR is getting full, oops). Anyone else watching Notorious? I loved Piper Perabo in Covert Affairs and Daniel Sunjata in Graceland, so fun to see them both in the same show! 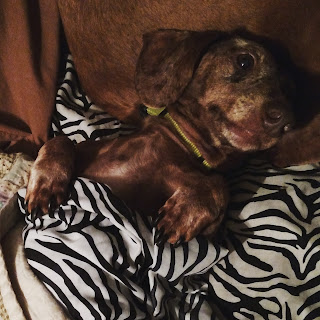 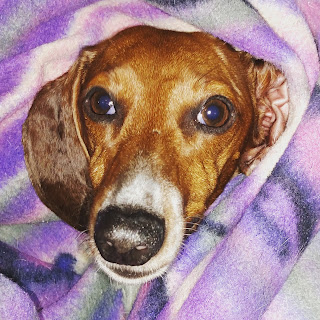 Sunday was by far the highlight of my weekend -- the forecast called for it to be 75 and sunny, perfect trail riding weather! Saturday afternoon I put out feelers on FB looking for a new trail to try out. There are a few equestrian trails near me, but most aren't really suitable unless your horse is shod, and some of them get kind of gnarly. We spend a lot of time on the Katy Trail, since it's close(ish), but it's fairly boring -- just a straight stretch of gravel with road on one side and houses on the other. Don't get me wrong, it's really good for conditioning, and it's a great introduction to trail riding for young horses, but visually, it's just not that interesting. And depending on the time of day, it can be long stretches without shade, so not a lot of fun in the summer. 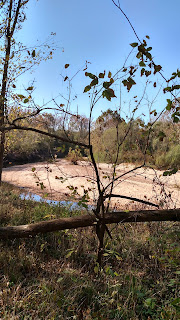 I got lots of suggestions -- some were for trails that were too rocky, some were pretty far away. There were a handful that sounded promising. After doing an ungodly amount of online stalking, we finally decided on Indian Camp Creek Park. About an hour away from the barn, it offers 600 acres with a lightly traveled 7 mile trail, plus several additional loops. The footing sounded decent for barefoot horses, most of the driving was on an interstate (as opposed to rural highway which can be a bitch), and comments online said the trail was well-marked. So we loaded up and hit the road! 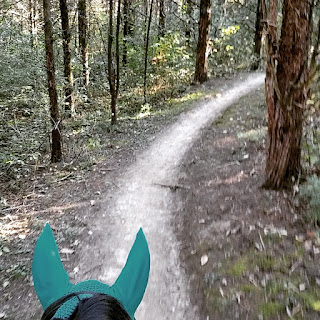 We actually hit a little bit of traffic on the interstate, and then the exit we needed was REALLY awkwardly configured for getting through with a truck and trailer (glad DH was driving!), but we finally arrived and had no problem finding the equestrian parking lot. There were about five other truck/trailers there, which I thought seemed promising! They had several hitching posts, and a really neat horse trellis thing made out of chicken wire I think? Also had a kiosk with trail maps, so I grabbed one (anddddd then DH lost it, haha). 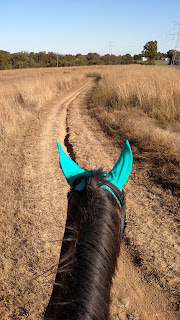 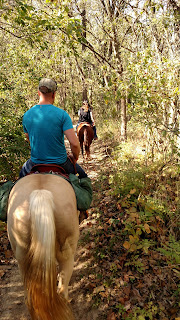 We tacked up, and headed out. Of course, like three-tenths of a mile in, there was a good sized creek crossing. Ruby is a little iffy about water crossings in the sense that as long as they're familiar, she's fine, but she can get kind of snotty about new ones (or if flooding has significantly changed one she's used to). After a little temper tantrum, I had DH and Trigger give us a lead over. She leaped part of it (which I was ready for), but then the next section had more water and she actually had to walk through it. I made her stop halfway through, she sniffed the water, then she settled down, and we continued on our way. The first half of the trails were excellent -- mostly wooded, sandy track, and obviously very well-maintained. For the most part we stayed on the main loop (Canon Trail), but we also made a minor detour off on either the Flint Ridge Trail or the Big Creek Trail, I can't remember. All the trails were very well marked, with clear arrows pointing where you needed to go. 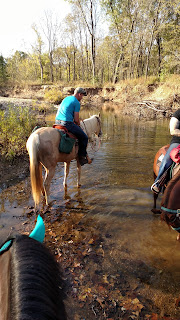 Because of the beautiful weather, we shared the trail with a LOT of other traffic. We ran into two other groups on horseback (luckily in areas where it was easy to pass), quite a few walkers/joggers, several mountain bikers, and a herd of screaming children (that was interesting). Everyone was very polite and we all observed proper trail etiquette, and things went smoothly -- I did have to call out (I hesitate to say yell, because I tried to be nice) to the kids, who were running and screaming directly at us, which the horses were a little unnerved by. Once they stopped and walked by, everything was fine. We passed quite a few parking lots, playgrounds, bathroom facilities, and a nice lake for fishing! Primarily we walked, although in a few open places we trotted and cantered a little. On the way back, I made Ruby cross the creek first and she was fine -- she stopped midway through the big portion to drink, which was fine, but then she started pawing, so I hurried her out. Wasn't looking to take a creek bath, it wasn't that warm ;) haha. 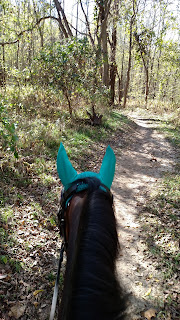 The horses were pretty tuckered, so we untacked quickly, got back on the road, and got them home to baths and their dinners! I was really pleased with how well Ruby handled a completely new trail -- she hacked on the buckle 95% of the time, only getting hissy about the stream. She had a handful of random spooks at cut trees (she's fine if they just fall over, but something about the smooth cuts of man-felled ones seems to alarm her? haha), but nothing even remotely close to naughty. She was fine with bikes, dogs, kids, and pedestrians petting her. I think with more work on creek crossings, they'll become a non-issue, so just need to get her out to more places! Even DH loved the trail, and said multiple times after we got back that he wants to go again (he is very ambivalent about the Katy Trail), so clearly it will become a regular stop in our rotation! 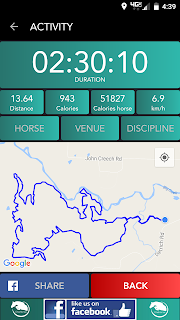