I had a really fun post (with pictures!) planned for today all about Ruby's massage on Monday (which she LOVED), but as always, life interfered.
Sunday afternoon our hay guy called and asked if we wanted 100 more square bales. We already have plenty for the winter (especially since I downsized horses earlier this year), but DH's attitude is that you can never have too much hay. So Tuesday I took off work early, trailered Cinna over to the barn for her farrier appointment (we're not going to talk about that, I nearly murdered her), and then rushed back to pick up the flatbed and head to the hay field. Picking up hay is INFINITELY easier with three people (one to drive, one to buck bales, and one to stack), but DH and I have done enough hay together that we have a decent system worked out for when it's just the two of us. We cleared the field of 106 square bales in under 40 minutes (minus the time I was being harassed by turkeys and got nothing done). 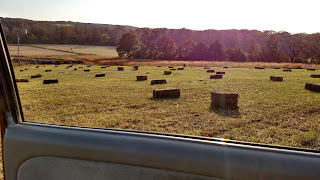 We rushed home and managed to get all the bales up in our hay shed before dark. November 1st is probably the latest I can ever remember doing hay. This is also probably the fullest our hay shed has ever been this late in the season (we're still feeding last year's hay), and we are wintering the fewest horses we've had since 2010. Not really sure how all those things work together, but there you go. Having hay put up is better than money in the bank for me, especially remembering how much we scrambled in 2012 when Missouri had a horrible drought (which was also when I had the MOST horses -- I think there were 8 at our house then). It's comforting to know that my horses can literally have all the hay they can eat, especially with two geriatric boys who require some extra TLC.