Saturday night was actually really rough -- one of the dogs was sick overnight and ended up puking twice in the bed. Nothing like two middle of the night sheet changes to totally kill a good night of sleep. The only saving grace was the time change was also Saturday night, so we had an extra hour to sleep. Nerves had me tossing and turning for hours, but I did finally manage to get some sleep. We got up and ready in plenty of time, and went to load the horses on the trailer. I sent DH out with Cinna first, because I wanted to see if his ear scratching trick would continue to work. Spoiler alert: it did not. It also didn't work bringing her home, so I felt slightly vindicated. I didn't feel like winding her up right before the show, so we loaded Ruby first and then Cinna climbed right on.
We got to the show and she unloaded and tacked like a champ -- I even tied her to the side of the trailer with a hay bag instead of making DH hold her.... Progress! I made some miscalculations in my timing and I only had about 15 minutes to warm her up in the competition arena before the show started. There was a separate warm up arena, but I felt like introducing her to that would probably contribute to a baby brain melt down, so I wanted to stick with just the competition arena (which is where she schooled so well Friday night). Right as I was finished my warm up, she got a little sticky about one of the corner (clearly there were trolls in it). I didn't want to leave the arena without making her walk over there, but I also didn't want to delay the start of the show, and I started feeling a little panicked. Thankfully, the show manager (also my dressage instructor from the summer) volunteered to stand in that corner for a moment and dispense cookies so we could calmly walk over there and then out of the arena. That did the trick, so we headed back to the sidelines to wait for our ride time (we were like the 4th ride of the morning). 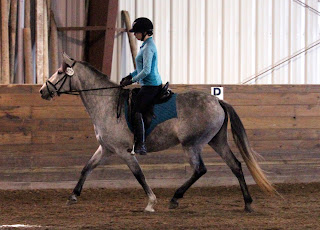 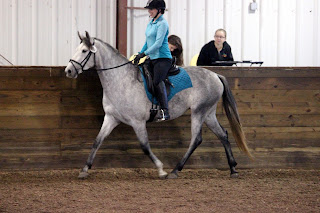 When we entered the arena for our test and checked in with our judge, Cinna eyeballed the scary corner again. God bless dressage instructor, who went and just stood outside the arena in that corner to protect baby horse from the trolls. The whistle blew, and away we went. We were showing Intro A, which is legit the equivalent of watching paint dry. God bless the seven or eight of my friends who showed up to cheer me on, ya'll were the best (although I suspect there might have been secret hopes for a rodeo to spice things up haha). We trotted in, and got to work. Halfway through the test I was grinning like a loon. She was totally listening, steering well, and letting me influence the speed of her trot (a little) with my seat. She was carrying her head like a giraffe, but she wasn't flipping it or gnawing on her bit like a beaver, so I'll take it! We had one spook at A, but she came right back to me. Our circles were even KIND of round! As expected, our free walk was nonexistent, but when we walked down centerline and she gave me the most perfect halt we've ever done (netting us an 8.5!), I teared up. There is something so unbelievable satisfying about having planned out a breeding, waiting and waiting for a mare to foal, being the first person to lay hands on the baby, teaching her everything from leading to loading (although clearly I fucked that up a little), being the ONLY person who has ever been on her back, and piloting her through her first dressage test. 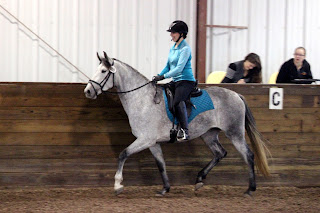 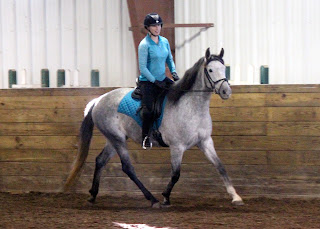 After her test, she went back to the trailer and tied out like an old seasoned show horse while I untacked her. I didn't want to deal with her at the trailer for the next few hours while I waited for Ruby's test, so I pulled Ruby's tack out and had DH run Cinna home. Not 10 minutes later I regretted that, when scores were posted (missed photo op guys!). There were only five people in my class total, so I knew we would ribbon, but I wasn't expecting much. I was absolutely shocked when I checked and we received a 68.438% and second place! The class winner was a schoolmaster who won with a 70%, so absolutely no shame in taking second to that. I stood there and cried like a ninny -- thank God my friends were still hanging out and they took Ruby away from me for a minute and let me process. Ride number 13 was pretty lucky for us! 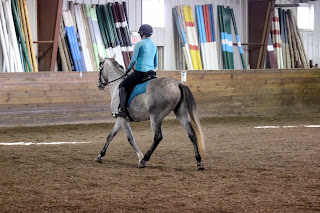 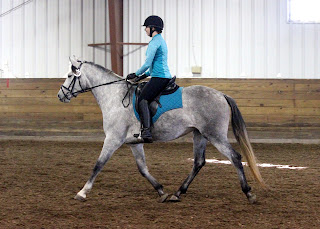 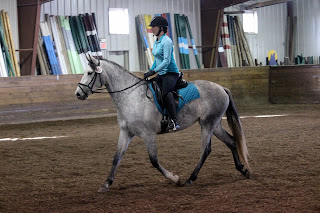 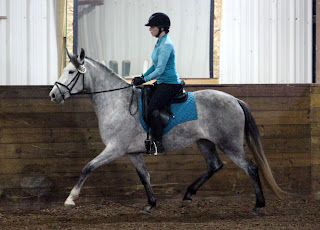 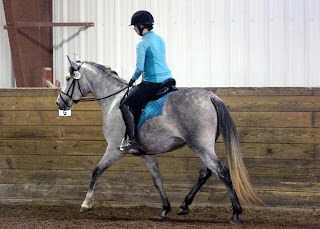 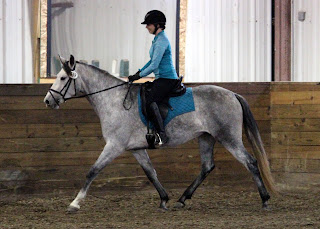 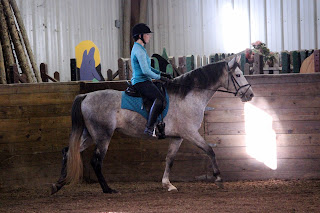 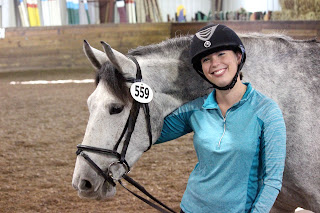 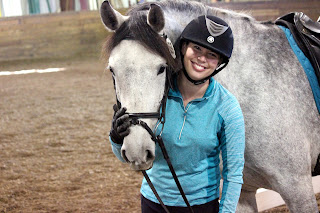 After I got off my emotional roller coaster (what can I say, I'm a girl sometimes!), I still had to pull myself together for Ruby's rides. Because I was still so stuck on the Cinna thing, Ruby got the short end of the stick attention-wise, but she's a good sport. She was a little tired after showing Saturday (she's not as fit as she could be because I haven't riding that much), so I kept our warm up very short and mostly at the walk. After our comments from Saturday, the biggest things I wanted to focus on were more correct bend, and not breaking gait at the canter. I was successful at maintaining the canter in both tests, and partially successful in the bend department -- no comments about counterbend in the first test, but we had some in the second. I know at least part of that was also exhaustion on my part -- I am not nearly as fit as I was last year when I was riding and showing two horses WAY more than I have been this year. I wasn't supporting her like I needed to, and that showed up in a variety of ways. 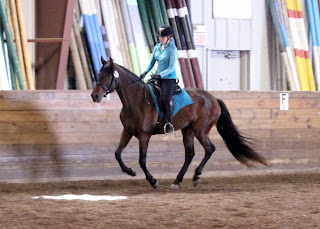 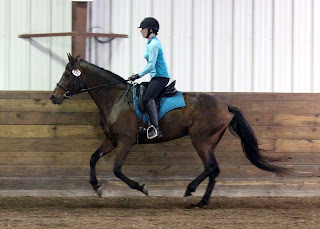 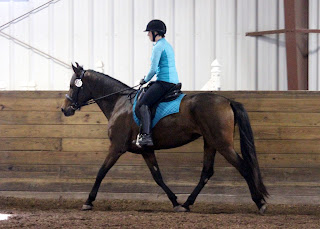 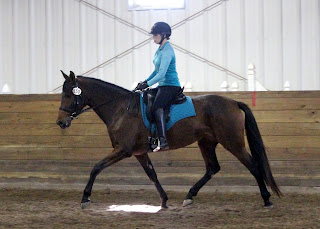 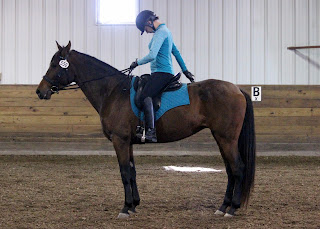 High note! An 8 on her final halt in the first test. Low notes -- comments about tenseness and counterbend, especially in the second test. We ended up with a 65% in T1 and 62.045% in T3, adding two more yellow ribbons to our collection. Although reading through all the scores from Sunday, the lowest was a single 5.5 (we did get a 4 on Saturday for a canter break and then wrong lead). If you'd seen some of my tests with Topaz my first year at training level, we had soooo many 4s and 5s it wasn't even funny, haha. 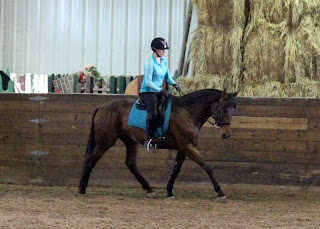 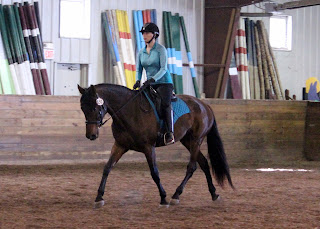 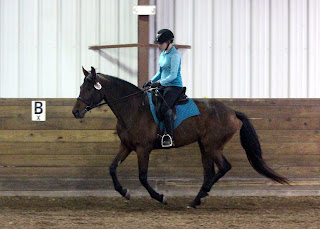 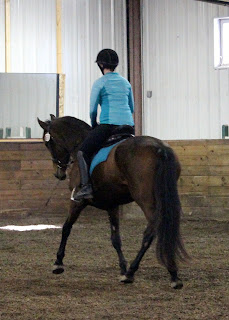 So with time to reflect on it, I'm really pleased with how we ended the year. This show last year was the first time I attempted Intro C with Ruby, so the first time she cantered in the show ring. This year, with limited schooling and showing, she still acted like a seasoned show horse at 2/3 of the shows (we're gonna ignore the spring show where she was terrified of the arena fan and tried to leave haha), and brought home very respectable scores. Especially considering she is self-trained by the klutziest AA and only five years old (well, almost six, but still). She is only going to get better and more consistent with time, especially if I buckle down and school more, and take more lessons. 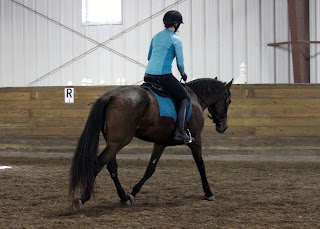 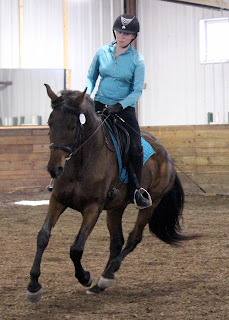 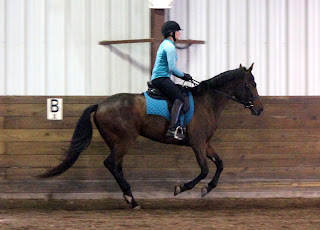 Sorry for the photo dump, but I'm ready to be done writing about this show and move on! Haha. Luckily it was a slow week riding-wise, so I won't have too much to catch up on next week. Ruby managed to poke her shoulder, so she's been mostly handwalking (or bareback walking in a halter when I'm too lazy to walk next to her). Today I have a fun ride planned with some girlfriends -- was originally planning to take Ruby, but since she's not quite 100%, I'll take Trigger McFattypants to help condition him a little for DH!
Posted by TrainwreckInTeal at 5:00 AM