Friday was one of the many state holidays I enjoy off as one of the perks of my job -- very belated thanks to all our veterans! I have many in my family, and I got to enjoy the company of one on Friday. DH was working, so Friday was a girl's day. The day dawned sunny and cool, but warmed up to the high 50s/low 60s, perfect for trail riding! Ruby's shoulder poke is a much improved, but I figured she might as well finish up healing since I have plenty of other horses to ride.
Trigger was my "victim" for the day, since I'm hoping DH's new schedule will lead to more trail rides for us. Might as well get him fit! Hanna drove her lovely mare Lily over to my house, we threw the assorted tack and horses onto the trailer, picked up our third lady friend, and headed to the trail! 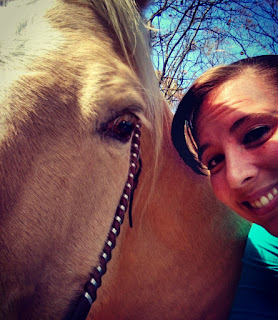 Last time we went to Indian Camp Creek, DH drove, which was a good thing, because there were some hairy areas to navigate with a truck and trailer. The truck I'm currently using to haul my trailer is a manual diesel, and I hate it with a passion. However, after carefully watching our route last time and some exploration on Google Maps, I had some ideas about how to circumnavigate the questionable areas (busy interchanges, hairpin turns, etc) and was able to take a slightly longer, but infinitely easier route. I would seriously pay good many for a maps app that accounted for a horse trailer and routed you around areas with tons of hills or stoplights or interchanges, but I digress. We arrived at the parking lot, squeezed into a space (apparently lots of people had the same idea!) and got tacked up.
I got to use my OneHorse app again, with appropriately edited weights... lol. Last time I didn't realize the app was developed in Europe, so everything was metric. Our "calories burned" was off the charts, because I inadvertently entered my weight as several hundred pounds, and Ruby's as several thousand! I don't think that part of the app is accurate at all, but I enjoy seeing the GPS overview and also calculating the distance/average speed. Despite skipping one of the side loops we did last time and just sticking to the Canon Trail, we still rode for almost the same time and distance... weird. 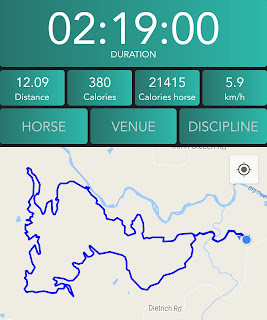 We only met one other group on the trail (although we met them twice), and only a few bicyclists this time. Oh and one lady walking two dogs -- the doberman was totally chill, but her teeny tiny teacup Yorkie literally chased us barking for like a quarter mile. Luckily all the horses were good sports about it, and the lady was finally able to recall the dog. I am kicking myself for not taking some video of that, because it was pretty hysterical. 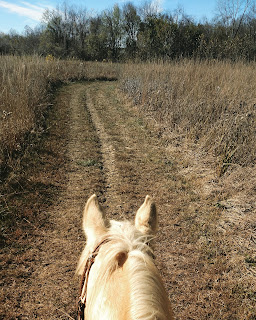 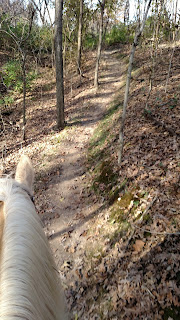 Mostly we just walked and yakked and had a great time. It was Lily's first experience on a trail besides the Katy Trail or the hunter pace last month, and she rocked it! She took her turn leading, following and riding in the middle of the trail. She crossed the water without a fuss, even stopping to play and dunk her nose in it. The horses tolerated our incessant photo taking, and I actually spent about half the ride without stirrups or reins (God bless Trigger's saintly husband horse heart).

In one grassy section we let the horses open up a little (and by open up, I mean a slightly accelerated canter, since we had two super chill stock horses and a draft cross, lol). Trigger also had to spend some time bridled up and jogging like a real western pleasure horse, since all he's done for a while is poke along on the trail. Once he realized I was serious, he just sighed and got to work -- he really is a good egg! I forget how cute he really is capable of being as a little walk/jog horse, since he hasn't shown in probably more than a year. 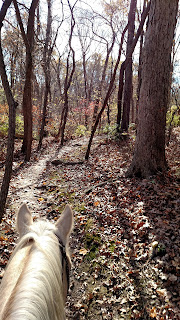 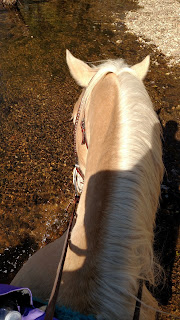 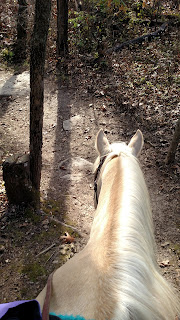 We enjoyed lots of snacks, and even made an exciting discovery! Hanna had just been telling us about having a fun experience cooking up some maitake (hen of the woods mushrooms) for her family the prior week, when we stumbled across a huge one on the side of the trail. Ever prepared (seriously you don't want to know what was in her saddlebags, haha), Hanna whipped out a gallon ziplock bag and I contributed a plastic grocery bag, and we filled them with chunks of mushroom. I should have put something for size reference in the photo, because even after packing up quite a bit, we still left half of it there. I'm not much for mushrooms, so I took my portion back for DH to eat. After much suspicious googling, he finally cooked it and ate it with some steak.
After a lovely, leisurely ride in which the horses hardly broke a sweat, we looped back to the trailer, crossed the creek one final time, and got ready to head home. We timed everything perfectly, as I was able to get all the chores done by the time DH got home from work, and settle in for a leisurely evening!
Saturday the dogs woke me up early (perks of the new schedule, ughhhhh) so I whipped through chores and then made a dent in my DVR (which was filling up with fall shows at an alarming rate). I should have worked Cinna, but with nobody home to call 911 supervise, I just couldn't muster up the energy.
Posted by TrainwreckInTeal at 6:00 AM