So now that we're all caught up on last week's weather, and Trigger's hoof hole, let's talk about Jack. He made a brief cameo on yesterday's post when I talking about bathing him last Thursday night in the nice weather. He seemed fine for his bath, dried off in the aisle, and then he and Cinna got turned out again. I didn't notice anything amiss when he came in for dinner Thursday night, but then when I went out to feed Friday morning, he hadn't finished his dinner, and wasn't interested in breakfast either. I handfed him a handful of Outlast, but he wasn't interested in treats. He had eaten most of his hay, his stall was full of normal-looking poop, and he had good gut sounds, so I decided to turn him out and keep an eye on him. Since the vets were coming anyway, I figured I'd have them give him a quick once-over. 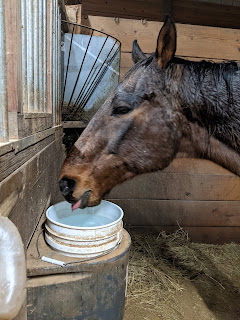 I turned him out in the front dry lot, which I can see from my office window, and then proceeded to fret as he just stood 30 feet from the hay bale, staring off into space. I went out several times to offer him hay, even moving an armful from the round bale feeder out to where he was standing. He nickered at me when I came out, but showed little interest in the hay. About the time I was debating calling the vets and asking them to come out earlier, he meandered over to the bale ring and started eating.

When the vets arrived, he was laying down, in the rain, just staring off into space again. I checked to make sure they'd have time to look at him after Trigger, and then tried to put it out of my head and focus on dealing with the more immediate issue, Trigger's hoof hole. Once he was rewrapped and back in his stall, DH ran out in the rain to grab Jack (who at least was standing again by this point). His TPR was all within normal limits, and the only thing even slightly suspicious was a bit of wet poop in his tail -- which could also be chalked up to the fact that he'd been laying down in the hay around the round bale where they like to poop, in the rain. While Jack going off his feed isn't what I would consider a *regular* occurrence, it has happened before, so as we were discussing that history, the vet said she would just keep an eye on him over the weekend, but that she didn't see a need for any immediate veterinary intervention. Of course, no sooner were the words out of her mouth than he proceeded to poop wet, sloppy diarrhea all over the aisle. Obviously that changed things, so we shifted the discussion. She recommended two tubes of BioSponge, one immediately, and one Saturday morning. She said we could also pull blood for a CBC panel, and take a stool sample (since he so helpfully had deposited one right in front of us), but that honestly just keeping an eye on him in conjunction with the BioSponge was probably adequate, since the rest of his TPR was fine. We compromised with them taking the blood/stool samples, but agreeing not to run them unless he seemed worse on Saturday -- Murphy's Law being what it is, it seemed likely that if they already had what they needed to run the tests, he probably wouldn't *need* the tests. One of the students gave him the Biosponge and we had a good chuckle at how easy it is to give him stuff via tube since he has ZERO incisors (and then naturally all the students had to come look at his mouth, since they weren't on the equine rotation this summer when he had them all pulled).
Sure enough, he ate pretty well Friday night, got his second tube of Biosponge Saturday morning, and seemed right as rain by the end of the weekend. My suspicion is that he had a little more alfalfa than usual Thursday (he got his normal flake while I rode Cinna, then he got to eat out of the scrap bucket drying after his bath, and also his normal ration in his stall that evening), and that maybe it was just a little too much for his tummy. Duly noted, and I will be a bit more vigilant about his alf consumption in the future. Glad it was just a minor scare! As of today, he's back to his normal self and eating his full rations like nothing happened. My horses apparently think their job is to constantly keep me on my toes!
Posted by TrainwreckInTeal at 5:00 AM