I guess I should have been more on top of things and written this up earlier, but there's not much to tell! Trigger had his first follow up appointment for the hoof puncture yesterday afternoon. The vet school just got a new rotation of students into equine, so they brought TWO TRUCKS and students kept spilling out like a clown car, haha. Apparently the vets like to use my horses as teaching tools! Several times they told the students how nice my horses are to treat, and that they're always well behaved. Warmed my cold little dead heart ;) After evaluating his comfort/soundness walking out of the stall, they let the students practice their TPR. Trigger stood like a rock for this, giving several of them who weren't as used to horses (yet) a good experience :) after that, they removed my extra vet wrap (after first asking permission, which made me laugh - do ANYTHING you need doc!), and then they cut off the elasticon to see how the cast itself was holding up. It didn't appear to be rubbing his skin at all, and he hadn't worn through the toe or cracked it. They decided to go ahead and just re-cover the cast with elasticon (and then naturally I added more vet wrap because that's who I am as a human being lol) and let it ride until next week. The casts can last from 10-14 days without issue, so we'll touch base early next week and see how things look to schedule the next recheck. 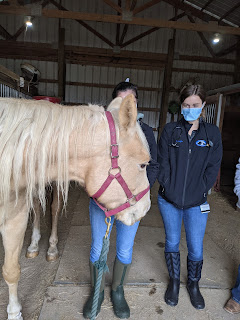 Afterwards, the vets explained the initial injury to the students (we all walked out to look at the gate hanger, and then I showed them the bleeding photos lol), and they walked them through the treatment and explained the pros and cons of various medications, including the painkillers and antibiotics he was on. I always love having these vets out because even after having horses in my life all these years, there is STILL so much to learn, and getting to listen in on them teaching the students is like free little lessons for me too :) I jokingly asked them if they would be willing to write me a prescription for a small companion animal to keep Trigger company, since the reality of the impending Missouri mud season (winter) means that he will probably be on stall rest a lot longer than I'd like to keep the hole clean as it heals.... and the backstory to that odd request is that the post and photo below came across my timeline Sunday and I IMMEDIATELY wanted to adopt him as a friend for Trigger during this recovery. I think he'd be a fun addition to our funny farm -- DH disagreed. Vehemently.
I attempted to sway the court of public opinion (duh) and naturally the entirety of my FB friends list was in favor, if only for the cute donkey photos they know I would post, and the never-ending litany of "ass" jokes to be made.
The vets were also on board with this plan (they actually treat the animals at the rescue Huckleberry is at!) and one of them happily agreed to be my vet reference. After finally wearing DH down (who are we kidding he is going to be way more obsessed than I am if this happens), I sent off my application to be considered for his adoption this morning. Luckily for Huckleberry, the director said they'd had a LOT of interest in him -- so even though it means we may not be the ones they pick, I'm glad that cute little guy is going to have a soft landing :) regardless, I'll keep you posted on that one!

Meanwhile, more stall rest for Trigger until his next appointment -- although we did get the green light to let him graze close to the barn door if it's not rainy/wet. They didn't want him walking far, but if we could alleviate his boredom a little without stressing the injury, that's okay. So. No news is good news for now, and hopefully I'll have more good news (and possibly more gory photos) after our next appointment, when presumably the cast will come off!

Posted by TrainwreckInTeal at 1:00 PM