Mirror, Mirror, on the Wall

OK so now that we've covered Trigger's drama, back to our regularly scheduled programming. Which, in the winter, tends to be a bit on the light side. But lets talk about mirrors! I've had the chance to ride in a few lovely indoors with mirrors, which is always a nice feature. Particularly since I spend so much time riding on my own (99.9% of the time), it would be nice to be able to glance up for a check in on what's going on -- aka, what sort of weird ways am I contorting my body, and reminding myself to knock it off.

A few months ago, on the phone with my boss, she was telling me about renovating the house she just bought. She made an idle comment about the "hideous" mirrored closet doors she pulled out of one of the bedrooms, and then I interrupted her to ask if she still had them. She seemed to think I was a bit nuts (what else is new), but she hadn't had a chance to drive them to the dump yet. I asked her to hold onto them for me, and that I'd come pick them up and get them out of her hair :) I knew I had seen posts in various places about some DIY arena mirrors with closet doors, so I figured we could give it a shot! Coordinating schedules took a minute, mostly because I kept forgetting, but I finally made it out there with the truck the Friday before Thanksgiving. They made the (long) trip home unscathed, and we tucked them into a corner of the barn until we could figure out how to mount them. Cinna and Ruby had both seen mirrors in arenas before, so I really didn't think they would be an issue, but I guess I underestimated their concern when I suddenly opened what the horses were sure was a PORTAL TO HELL in the barn.


They sat around in the barn for a few days until we could get around to mounting them. I did a lot of googling and reading over threads in horse forums trying to figure out the height they needed to be mounted and whether or not they needed to be angled. I decided to start simple, with just one mirror, and to mount it about 4 feet off the ground. The goal was to ride in front of it pretty immediately and then give DH feedback about the height/angle, but then Trigger sort of mucked that up for everyone. 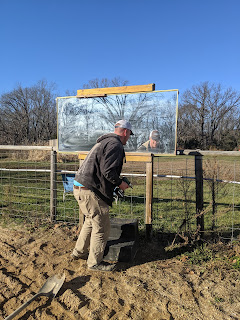 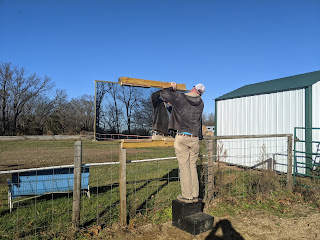 Sunday the weather wasn't great for riding (aka, whipping winds and falling temps), so I had to wait until Monday night to finally test it out. Which, come to think of it, was probably far worse from a weather standpoint, but ya know, I'm not known for my good life choices. Like the fact that I went out to ride in jeans, haha. I DID at least put a real saddle on Ruby, so that I had stirrups in case there were any shenanigans.

So. At least now I have some homework (clean the mirrors), and also I need to buy a few more landscape timbers to mount the next one. We'll see how it goes :)
Posted by TrainwreckInTeal at 5:30 AM