I already wrote about how gorgeous last Wednesday was, but Thursday was equally (if not more) gorgeous. I know DH and I had some things to accomplish in the evening, so I ended up taking a half day so I could do my riding and barn things in the afternoon before he got home, and that worked out perfectly!

Cinna was up first. I was wary when I brought her out because I cross tied her and she immediately went into giraffe mode. That does not always bode well for our rides, but I shrugged and saddled up anyway. 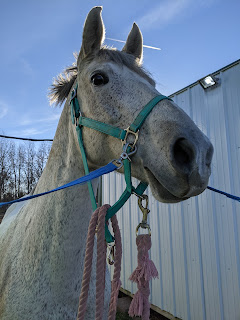 After a few rounds where she dragged me over to stare at herself some more, she settled into some productive work. Towards the end she was getting tired -- neither of us is in great shape, it was 70 degrees, she has started growing a winter coat, I get it. She started looking for things to spook at. She's not dirty about it, she very much telegraphs what's happening, so she didn't unseat me. Nobody tell her she did actually get close when she dropped a shoulder and spun away from a light spot on the sand caused by a reflection off the mirror, but I managed to stay on, lol. Annnnnd then we rode over that sunspot about 15 more times. 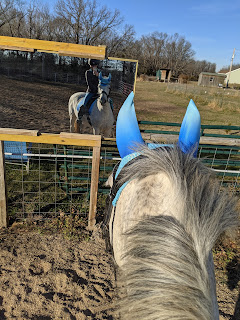 I was feeling a little bold, so I decided to take her out to the back field. For all that she's *relatively* confident on new trails, she is a quivering mess of jigging and spinning whenever I take her out alone on our trails. I've tried handwalking with her on them, and it does help, but what helps the most is more miles out there with a friend, and the trouble is I don't get to do that often -- even less now that Trigger is out of commission for a while. But, she's never going to get better if I don't DO THE THING, so we walked out in the field for a while. She'd flat walk away from the barn, but the minute I turned her around she wanted to jig and bolt. So we did a loooooot of circling around, some standing and getting treats for relaxing at all, basically praising the bejesus out of any good behavior. There were a few moments I thought maybe I should have warned someone where I was and what I was doing, in case of disaster, ha, but it worked out fine. No photos though, I was mostly trying to live. 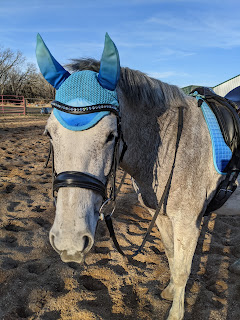