Last Friday afternoon Trigger had a vet visit scheduled -- it was the 13-day mark since the injury, and the vets said that typically the casts lasted about 10-14 before they needed to be removed/replaced... so right on schedule. I did notice earlier in the week he started to wear through the toe of the wrap a little, so I threw some extra vet wrap on it every other day to keep a fresh surface there, so he didn't wear through the elasticon and damage the cast. By the visit, he'd been off Bute for a week, and while you could still see that he wasn't *sound*, he was weighting the leg well and definitely comfortable moving on it.

They brought two trucks of students again (I told them Trigger is going to start thinking he's some kind of celebrity or something lol), and they ran through the basic TPR -- different students than the last visit, so more practice on a steady eddy. His digital pulse was slightly elevated on that foot, but nothing out of the ordinary all things considered. So then they moved on to cutting the cast off. After a quick discussion, they opted to try it first without sedation, but kept the option of drugs if he wasn't willing to stand. 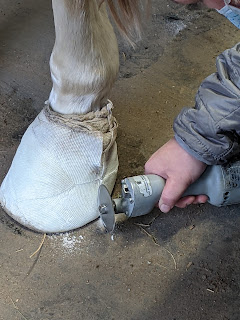 I was prepared for all sorts of possibilities when they pulled the cast off -- I was hoping since he remained relatively comfortable and sound, that we'd find some good healing when they finally removed all the layers of wrapping... and Trigger did me the solid of letting that dream come true, haha. 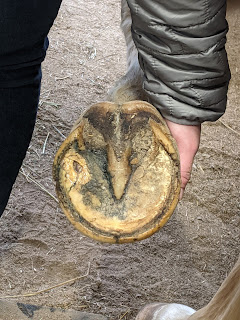 The vets were very pleased with how it looked -- it was pretty much best case scenario. It's healing well, no signs of infection, so they didn't recommend follow up rads, or even a hospital plate (things we had discussed at the previous visit as being on the table). Then we had some choices to make about the treatment going forward. They offered two options -- we could cast it again for another two(ish) weeks, or I could take over wrapping it on my own. The casting would have a higher up front cost from the vet (which honestly was so negligible it didn't really factor into my decision), and he would need to stay on pretty strict stall rest. Wrapping the foot myself would have the added bonus of me being able to lay eyes on the wound to keep an eye on the healing regularly, and if it freezes up and is relatively "nice", he could *potentially* be allowed outside if we could sort out a situation where he wouldn't get near mud. Of course, the day they visited was POURING rain, so that maybe be more of a pipe dream than anything else, but we decided to go ahead and start wrapping it ourselves. I can always tap out and have them come back and cast it if I don't think it's healing as it should with me wrapping.

It's been a long time since I had to wrap a hoof, but thankfully my animals are always willing to sacrifice themselves to make sure my first aid skills stay sharp! (Heavy sarcasm)