I know I posted about the first bandage change after the cast came off, but obviously haven't kept up posting after each change -- mostly because I'm sure there are only so many posts you want to read about his hoof hole, and there is only so much to say, lol. But I have been photographing each one for documentation purposes, so let's catch up. Perfect timing, since he had another follow up visit yesterday.

On the second change, I got a little concerned about proud flesh. I waited until normal business hours (since I change the bandage in the evenings most days) and texted a picture to the vet to see if she wanted to move up our next re-check, or if she wanted me to change anything about our treatment protocol. She said as long as the drainage hadn't increased and he wasn't lame/overly sensitive when I cleaned it, she wasn't super concerned yet, but to keep an eye on it and we'd see how it looked at our scheduled re-check (with the obvious caveat to move it up if he got suddenly more lame/more drainage/etc.).


By his third bandage change I thought maybe it looked a little less proud-flesh-y, but also that I was far from an objective judge since all I do is stare obsessively at it with every change, haha. His comfort level seemed the same, so I just stayed the course and kept on our trajectory.


Over Christmas weekend (are we sensing a theme with his holiday weekend shenanigans?), Trigger had a puffy eye. This is not SUPER uncommon for him, since he is very prone to allergies and he loves to rub his eyes, making puffy eyes worse once they start. I think the issue was that Thursday/Friday it was COLD here so I had the barn door closed in an effort to keep him warm, and I think it just got a smidge too dusty for him. 24 hours in his bug eyes/pirate mask, and his eyes were back to normal before the vets were here yesterday.


So that catches you up to our vet visit yesterday! After they wrestled my multiple layers of duct tape off (lol), they gave it a good scrubbing and poked and prodded the tissue growth. They were happy with how it looked, but wanted to take some rads just to be positive everything was kosher inside the hoof, which was fine by me. The vet is well aware of how obsessive I am and I would much prefer to pay for unnecessary rads that show nothing bad than skip them and try to save a buck and realize down the road we've got issues. 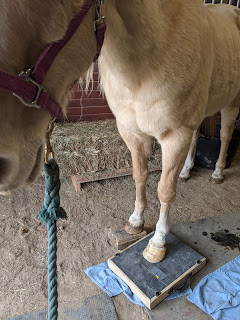 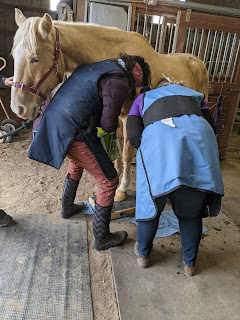 The main vet wasn't here the day of the injury, so she also pulled up his old rads to compare. His hoof does have a slight defect internally (on the side where the hole is), but it was there in the original rads too, so it's not anything caused by this injury or a resulting infection -- he just has sort of shitty feet/conformation (which I already knew) compounded by his age and years of percussion on the bone. The rads didn't show anything else new or concerning, so she said just keep on keepin' on. We covered the alternative treatment options again -- they can come back and cast the foot, or a hospital plate is always an option -- but both of those are significantly more expensive than me just carrying on with the wrapping. They gave me two thumbs up on on the wrap they cut off, so I said I didn't mind sticking with that. A cast or hospital plate would mean I had to do less work, but honestly he's not bad to wrap and I do like being able to lay eyes on it periodically. If I thought either of those things would give us a better chance at a good outcome, money would be no object, but he's making good progress doing what we're doing, so I just need to remember it's a marathon, not a sprint :) he did get the green light for some turnout in a small confined DRY space for short periods of time, but of course we're under a winter storm advisory today. Oh well, that'll give us time to rig up some extra temp hot wire in the front pasture and build him somewhere to go that ISN'T his stall once it dries out again.

If they send me the rads before this publishes, I'll add them, but if not, I'll try to post them in a future update!