First things first -- I was notified Monday that the cute little mini donkey, Huckleberry, was on adoption hold for someone else (presumably someone who didn't take 5 days to convince their husband to turn in the adoption application lol). Which is great news for him honestly -- also I think DH is rather relieved... haha. That doesn't mean I won't bring home another mini donkey should one cross my path..... The rescue told me they'd follow up if for some reason that home didn't work out, but I'm not holding my breath. 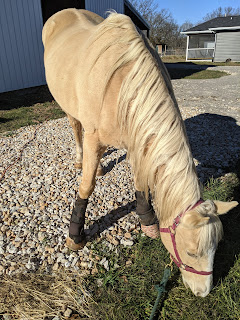 Trigger is still holding steady -- he's clearly bored on stall rest, but not doing anything naughty. He has another recheck scheduled for tomorrow, when presumably the cast will come off. They said they last on average 10-14 days, and we're at about day 12. I think it helps that I keep obsessively wrapping and rewrapping it with vet wrap, which he does wear through in a few days... but so far the elasticon the vets wrapped it with (and presumably the casting material underneath) are still in good shape. I was getting a little worried about his refusal to lay down in his stall (because he lays down CONSTANTLY when he's in turnout), but this week I've caught him napping more than once, so I feel better. I'm also getting him out to handgraze (which the vets signed off on) and he seems to enjoy that. He's been off bute for almost a week and while he is obviously still cautious on that foot, he's not *lame* lame. I've got him up to wearing my BOT quick wraps all day. They probably don't do anything besides make ME feel better, but whatever works I guess! 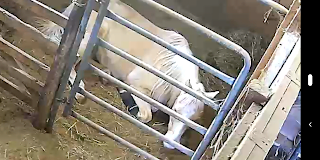 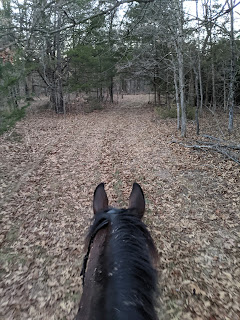 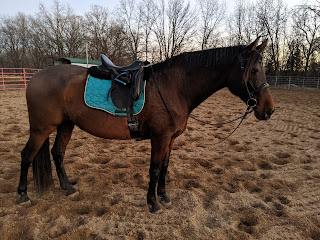 I don't think it's going to get *quite* as warm today, but I'm hoping to get Cinna out. May even force her to suffer through a good hosing if it's anything like last night! Hopefully you have also gotten to experience some lovely, unseasonably warm December weather! :)
Posted by TrainwreckInTeal at 7:00 AM