After I rode Cinna, I headed back inside to shower and get dressed in clean (well, not-sweaty) riding clothes, grab a bite to eat, and unwind a little bit before we needed to leave. Since we'd taken the boat out the night before, DH decided to tag along and drive the trailer (and I begged some photos out of him too). When I walked out a little after noon to grab Ruby to load up, she was wildly uninterested in cooperating, because her breakfast in bed was so much more appealing, lol.

The drive was relatively uneventful (traffic on the highway, but to be expected, and I built in time for that), and then I had DH slightly deviate from the GPS-suggested route trying to avoid a sort of hairy turn I encountered on my first drive. That was marginally successful, although the new route took us through a very ritzy subdivision, so there were a few stop signs. No problem, they were preferable to that turn!


We arrived in plenty of time, so I parked and tacked up in the same spot as the week before. We walked in to warm up right as Cici's acu vet was finishing her lesson on her GORGEOUS horse so we got to peep the end of her ride and then chit-chat with her for a minute, which was nice! Once we got started, trainer asked me how my rides over the previous week had been, I gave her a brief synopsis (which was, it was HOT AF and I didn't get much productive done lol) but then we started talking about goals, in the context of what I wanted to work on that day and how that fit into my overall goals. I really struggle with putting stuff out there into the universe because I always feel like such a fraud, but I'm trying really hard to overcome my imposter syndrome, both in riding and at work, so here goes. I told the trainer that I was interested in showing recognized as part of a barn team (not solo, I think I probably did enough solo showing in 2015 to turn me off it for life lol), but that I didn't want to waste my money until I felt like we were pretty solidly ready to not embarrass ourselves at 1st. My biggest motivation may or may not be the TWO show coats I have in my closet that still have tags, hahaha. Trainer got very excited, and not only was that an attainable goal, but it dovetailed in with what she had roughly planned for us anyway. Kismet! 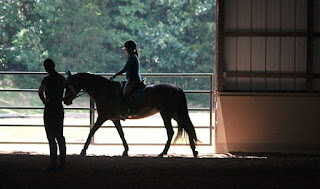 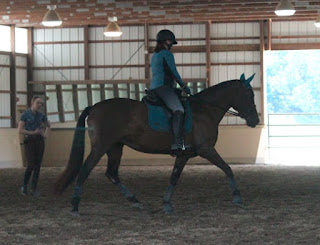 After a few circles at the walk and trot, she had me work on leg yielding from the quarterline to the outer perimeter of the arena on the long side - we talked through my hesitation about installing lateral work on my perpetually green horses (mostly a mental hang-up from a lesson with a previous instructor), but she said just go out there and try it and we'll go from there.... and to my surprise, the leg yields were... not terrible? We definitely had a few good strides each direction, which was a nice feeling! Especially since it hasn't been something we've worked on a lot. So we took that feeling and worked to translate it into the canter, since one of the things I told her I felt we struggled with was sort of motorcycling around at the canter. The left lead canter was infinitely better than it had been the previous lesson (far more on par with how it normally is at home), so we worked on her letting me influence it a little more by changing my body. It was hard, and we broke to trot a lot while I tried to marshal my various body parts into doing what I wanted, thereby confusing poor Ruby... but we definitely got some really nice moments! 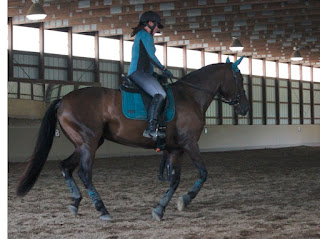 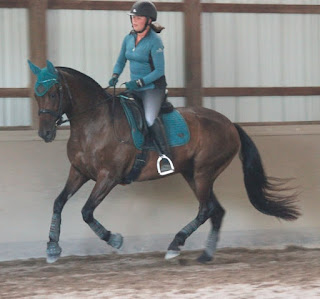 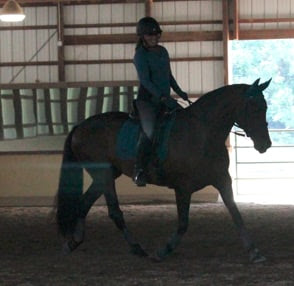 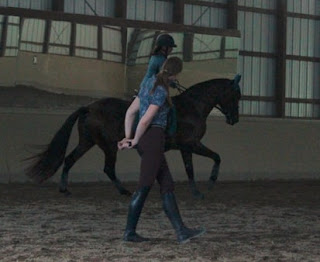 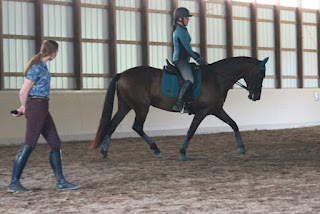 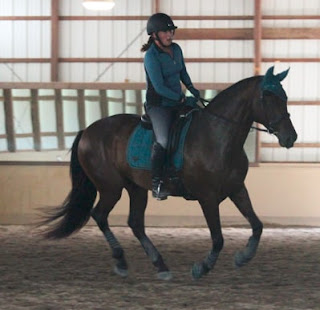 After some decent canter circles, we moved on to 10m circles at the trot - holy cow is my geometry SO BAD. Not that that's really a surprise to anyone, we rode a lot of 10-sided amoeba shapes, haha. We definitely had good portions of circles, but never managed to put together an entire one that didn't fall apart. No matter though, I'm not planning on showing 1st level tomorrow (or probably even this calendar year), so it was good to identify the weak points so I can keep chipping away at those at home on my own between lessons. 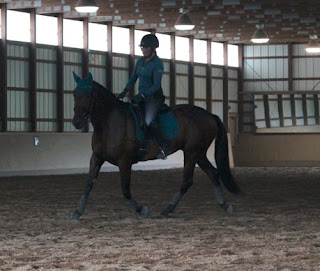 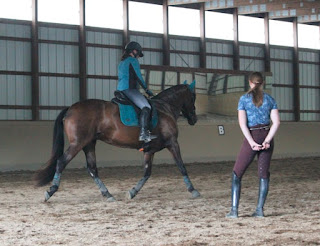 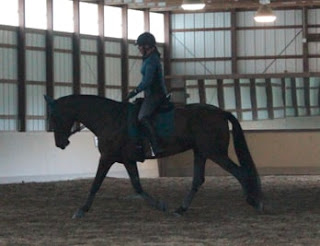 Overall, another really productive (AND FUN) lesson that left me with some homework, a plan, and some hope that we might not be entirely hopeless at this dressage thing :) after our ride I hosed Ruby off again in their fancy washrack, and another boarder stopped to chit chat with us and feed Ruby carrots. Not the same one as last time (that messaged me on FB), so another nice person at their barn :) new trainer has a schooling show this weekend, and it's supposed to be shitty hot, so I'm not 100% sure we're going to be able to fit in a lesson, and the weekend after that I think the barn is attending a recognized show that I told her I'd love to come and spectate at (and get to know some of the other riders in a less stressful way, when I'm not attached to my horse, lol) and maybe take some photos for them! But definitely going to keep trying to get on this trainer's schedule at least once a week as my own schedule/finances allow! She also does virtual lessons so I'm hoping even when the weather gets bad I might be able to either use the Pivo (assuming I ever get it to track reliably lol) or get DH to man a cell phone. I've secured a location nearby to ride in an indoor if necessary (although I don't want to push my luck too much with that), so hopefully we'll be able to keep making progress even through a crappy Midwest winter. And that's the most long-term planning I'm capable of right now, lol.