Saturday morning I was planning some early rides and then hopefully a little river time during the heat of the day, but we all know what they say about plans and horses, right.....?

After bringing everyone in and feeding breakfast, I stopped to watch Cinna, who was repeatedly demonstrating the flehmen response (curling her lip up), completely ignoring the small pile of alfalfa scraps I had given her after I cleaned up the remainder of the boy's bale. This by itself wasn't super out of the ordinary, she's been known to make faces when she eats something new, and I'd started adding Gut-X to her ration balancer a few days before (it didn't seem to do anything for Ruby but I got some on sale and figured it wouldn't hurt to try on Cinna). But the more I watched her, the more I got the "something isn't right" feeling. Especially when she kept ignoring the hay (alfalfa is CRACK to her). 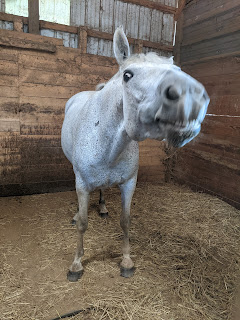 Soon she started flinging her head around (which again, by itself is not abnormal behavior for her), but then she sort of hunched and retracted her neck. If she was a dog, I would say it looked like she was getting ready to vomit, but of course she's a horse so I knew that wasn't it. That's when I was like "welp, she's choking" - I immediately called the vet hospital I use, and then as I watched Cinna flung herself down on the ground and rolled. I got her back up, she did the weird hunchy neck thing a few more times, then sighed and went over to the hay pile (which I immediately dragged her away from). Even though she managed to clear the choke on her own, I still wanted to run her by the vet - better safe than sorry! The trailer was still hooked from my lesson the day before so we tossed her on and headed up to the clinic. Side note - she loaded up alone like a total adult and I was super proud of her! 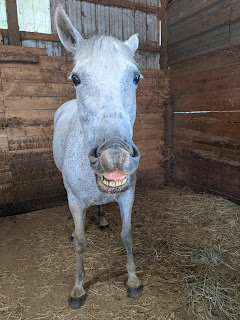 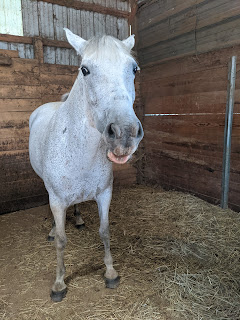 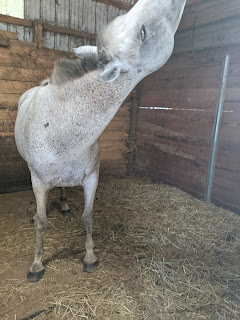 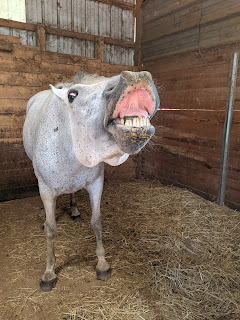 When I called to talk to the vet hospital about bringing her in, I EXPLICITLY asked if clients were being allowed in the building - when Trigger/hoofgate happened last year, they were not, and we decided (for a multitude of reasons, but one being how much of a dick he can be to handle for new people) to have ambulatory come to us instead of going to them. I asked before I committed to bring Cinna in because the vet hospital can be a bit overwhelming, but I figured if they needed to scope I'd rather she be there than at my house. If they'd told me I couldn't come inside with her, I probably would have rolled the dice on ambulatory since she'd already cleared the obstruction on her own and I was just having her checked out to be safe. I'm sure you can tell where this is going - we got there and they told me we couldn't come inside with her 😑


A student took us into the lobby (apparently okay for us to go in there but not back with Cinna?) and started taking down the history.

Sitting in the lobby I got a front row view of the vet attempting to walk Cinna through the door, Cinna being disinclined to acquiesce to that request, and then her taking the vet water skiing around the parking lot before the vet finally let go rather than be dragged over the gravel 🙈 as Cinna merrily cantered around the parking lot, I sighed and went back outside to catch her. Thankfully the parking lot is fully enclosed for situations like this.... they opened a bigger door (slightly less scary), and I caught Cinna and calmed her down enough to hand her off to the vet once I had her inside the building. Hey, at least she felt good? 🤦‍♀️ We hung out in the lobby while they ultrasounded her and tubed her and found nothing abnormal. They gave me some broad spectrum antibiotics in case she aspirated anything into her lungs, and we talked about next steps. The ration balancer she is currently on is pretty fine pellets, and combined with the stickiness of the Gut-X gel was what caused the choke. So for the foreseeable future, she's getting very soupy soaked pellets (which thankfully she's been a good sport about eating). I've also made it a point to hang out and watch her eat every meal since then, just to be safe. Also for anyone concerned, I did reach out to Gut-X about the effectiveness of their product if it was submerged in soupy feed, and they said it still works fine, the only time it loses effectiveness is if it dries out.
Hopefully just a one-off experience and a really unfortunate $900 bill and ruined Saturday 🥴 and as much as I LOVE LOVE LOVE and adore my vets, I'm more than a little annoyed that the cost to walk in the door AT THE CLINIC (you know, where I did the work and brought the horse to them) cost me almost 4x as much as the emergency ambulatory fee when they came out Thanksgiving weekend for Trigger -- how in any realm of possibility that makes sense, I don't know, but I'm still more than a little frustrated about it. His bill for an emergency visit THANKSGIVING WEEKEND, multiple rads, CASTING HIS FOOT, and antibiotics was significantly cheaper than the bill for me driving Cinna to their door and being checked out for a choke she cleared on her own. Oh and that doesn't account for the fact that she could have seriously injured herself running around their parking lot. So. Lesson learned. Always have ambulatory come to me. I 100% know it's not the vets setting the pricing it's their admin or billing department or whatever, but that was just a real punch in the gut for someone who really tries hard to be a good client and make their lives as easy as possible.
On the plus side, I did finally sell that Schleese, and I was going to use the money to buy an identical model saddle to the one I already own so each horse could have their own, but instead it's paying Cinna's vet bill. Yay, horses.... sigh.
Posted by TrainwreckInTeal at 5:00 AM