Living on a farm, I sometimes have adventures with wildlife that my coworkers consider bizarre -- for me, it's just another day. Last Friday morning, DH was doing his chores (which involves taking care of his chickens), when he saw some baby possums. Their mom was dead, and he thought they might look old enough to be on their own, so he decided not to touch them and just let nature take its course. Did he stick to that idea? Fuck no, of course not. So Friday night while I was trying to ride, he wandered back down to where he saw them with a big rubbermaid tote and a blanket and fished them out of the little grass den they'd made. Since I rode so late, by the time we got in it was almost 9 o'clock, and he had 5 baby possums who had been out in the heat all day and presumably had not eaten or had anything to drink. 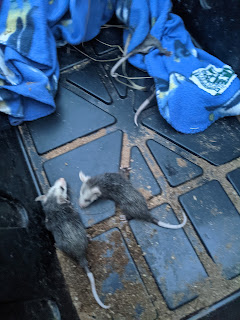 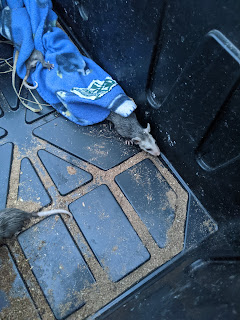 After consulting Dr. Google, we decided baby possums were out of our depth (PLUS I HATE THEM, can you spell EPM?), so we started trying to contact possum rescues -- of which there are a truly alarming amount. We found one about two hours away, and the lady who ran it told us to give them a shallow dish of water and wet dog food for the evening, and then to try to get them to a rescue first thing Saturday morning for formula. She had about 40 babies in house at the moment (!!!) so she attempted to find us somewhere closer to take them. 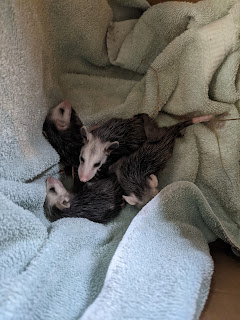 Of course first thing Saturday DH had a chiropractor appointment (still trying to get his back right), so he networked on the drive to and from and was finally able to find someone a little closer (only about an hour away, instead of two) who had the space and time for these guys. By the time he got home and we packed them into the car, it was raining anyway, so a road trip was at least an interesting way to spend the day! We took them to a woman who is licensed through the state as a wildlife rehabber -- she had raccoons, other baby possums, and even a bat! She had a really cool set up, with special rooms and cages both inside and outside (and biosecurity protocols, which I thought was relatively impressive given the circumstances). She let us come in and watch her weigh the babies and give them a quick meal of formula before settling them into their new digs. There were two boys, three girls, and she was impressed with all of their weight, and said they were in great shape all things considered. We filled out some paperwork, left her a donation, and then gradually made our way back home (stopping for lunch at the Krumbly Burger and doing some shopping along the way!).


After they're a little bigger, she will work to reintroduce them into the wild -- apparently she gets a lot of requests from people to bring possums out and release them on their land, since they do such a good job at keeping down ticks, fleas, snakes, etc. I'm just glad they won't be growing up on my farm in close contact to my horses :) Thus ends our good Samaritan job of the weekend, lol.