Last Monday was disgustingly hot, but the weather forecast for the rest of the week was even worse, so I sucked it up and rode anyway. Sometime on Sunday I had gotten a weird urge to try on an old pair of Petries that were hanging out in my tack shed (listed in this post as my show boots -- have I shown since 2017? Probably not. Oops), and with the assistance of some boot pulls, I actually got them on. It was dicey, and I had to wrestle them off with a bootjack, but I got them on. They're literally so old they're pull ons, no zipper. I got them.... a while ago, with the intention of them being my "special occasion" (so shows and clinics mostly) boots, and then promptly stopped showing or clinicing. And then the quaran-fifteen had my calves too wide for anything besides my super stretchy mountain horse schoolers, so I was bitter. I've been slowly chipping away at those pounds and since I could actually get the boots on, I decided LIFE was the special occasion, and I decided to ride in them. Was this a good decision when it was 90+ degrees? Possibly not, but when do I make good decisions?


I had a plan for the ride -- warm up at the walk in the Equiband ab band, and then just a quick walk/trot only ride making sure all the buttons we worked so hard on on Saturday were still there. And Ruby ACED it. She gave absolutely zero fucks about the warm up in the ab band, and then she showed up to work in the trot work. I had been itching to ask DH to come out and get some media, but his back was out when he got home from work so he spent the whole ride sitting on the couch icing his back, sad day. I guess maybe I could have busted out the Pivo but it didn't cross my mind until too late, oh well. 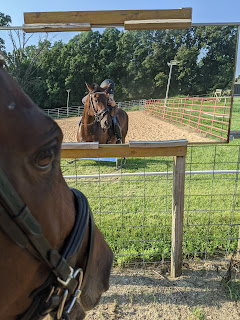 There were definitely a few points where she really wanted to anticipate the canter, so we just used those as times to work on that half halt (and in some cases, actual halts!). I felt really good about where we ended it, after only about 25 minutes due to the heat and the fact that we're both still gradually getting there in terms of fitness.

After a lot of soul-searching last week and being in my own head too much and having friends talk me down off a ledge, I narrowed down a list of dressage instructors and reached out to my first choice last week -- I've got a lesson scheduled for this Saturday!
Posted by TrainwreckInTeal at 4:30 AM