Before I get to Sunday's lesson, I need to drop some quick photos and thoughts about my rides Saturday afternoon (both mares) and Sunday morning (Cinna). I came home from the clinic Saturday really enthusiastic about putting in some good work before my lesson Sunday, and I started with Cinna. It was hot, but manageable, particularly after the hellishly hot weather we'd been having. Remember in Monday's post where I mentioned the feathers in the arena? I didn't even think twice as I walked Cinna towards that corner, until she did a teleporting spook that carried us about 15 feet over towards the middle of the arena, and then attempted to spin and bolt. Apparently she was uninterested in heading over to the corner of the arena where she was very sure MURDER HAD TAKEN PLACE.

We did eventually work through it, but she spent a good half of the ride trying to avoid that corner of the arena, trying to run away from it, and generally being pretty unpleasant about it. She got bored relatively quickly when I refused to play her game and when we worked in the corner just as much as we worked everywhere else, and we did end up having a productive ride! But I won't lie, I was relieved to untack her/hose her off and grab Ruby.


I kept Ruby's ride pretty light, since I wanted to make sure she had plenty of energy for Sunday (also since I was fading quickly in the heat -- there's a reason that when I work both horses, I try to do it very early in the morning, lol). I got off feeling confident that at least we wouldn't embarrass ourselves (you know, more than we already had) at the lesson the next day! 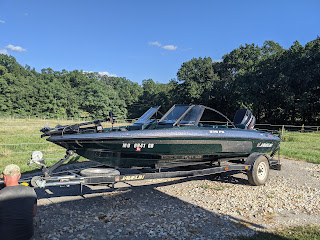 While I was at the clinic and then riding my hooligans, DH was dismantling the boat. The guy we bought it off of hadn't done ANY maintenance in the 6 years he owned it, and it had sat for the last 3, so uhh... it needed some TLC! He got it all put together by about 6 pm, and I cajoled (okay harassed and sort of goaded lol) him into driving us down to the river for a quick sunset cruise, just to make sure everything was in good working order before our next big river event!

We had a really good time, and it was a nice way to unwind after a day spent doing both of our favorite things! Sunday morning I slept in (until 7, THE LUXURY), since we didn't need to leave for the lesson until early afternoon. That gave me time to both ride Cinna AND bathe Ruby, so she looked slightly less like a disheveled heathen lol. Cinna's ride Sunday morning was WAY better than Saturday's, reminding me that when she feels like it, she can absolutely be a reasonable and productive adult horse, lol. 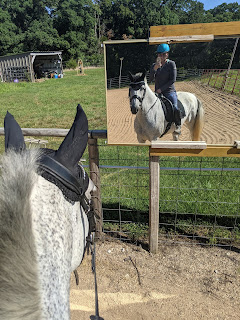 I wrapped things up in plenty of time to get back inside and grab a quick lunch before we headed off to my second lesson! :)
Posted by TrainwreckInTeal at 5:30 AM