Sneaking in Another Ride

Last Monday was another state holiday, and the forecast was calling for 70 degrees. It was too beautiful NOT to ride, so I dropped a message to the owner of the barn where I used to board Ruby to see if I could haul in if she had any empty time between lessons. It just so happened the arena was empty when I messaged and my stuff was all still packed on the trailer, so I put breeches on and drove the one mile down the road (that barn commute was my favorite, lol). I decided to let Ruby do some free lunging first to get any of her silliness out before I got on, and that was a good choice. There were two bottle calves outside one corner of the arena and she had some FEELINGS about that, and then she could see the pasture horses having a good ol' time running around out the other door, so I was treated to a few minutes of her obnoxious tight backed auction trot. Oh well, better to get it out of her system before I got on! 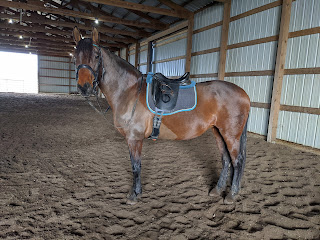 Despite the explosive start (lol), we had a really nice ride! It felt very reminiscent of our schooling rides in December, so it was nice to know it didn't take much to get back to where we were. Neither of us are quite as fit, but I feel like we're still at a better baseline fitness than we were at this time last year - hauling out for the lessons, even when it feels not super productive, has still been good for us. This arena is a bit narrower than a small dressage court, and previously when I boarded there sometimes the canter could be tricky with Ruby having a tendency to get a little motorcycle-y. I didn't originally even plan to canter, but she was doing so well I figured why not? One of the things we worked on in my lesson the day prior had been to constantly be changing the bend or turning in the canter, and not letting Ruby stay straight for longer than a stride or two (since that's when she tends to try to take over), so a small arena was actually perfect to work on that, lol. It went way better than I expected! Her balance has really changed in the last year thanks to all the lessons. 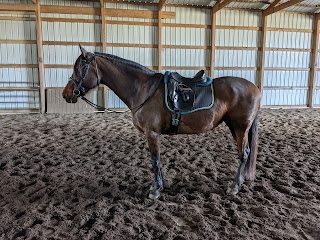 It was really nice to get out and have a good ride without the time/financial commitment of hauling out for a lesson. This barn has a THRIVING and incredibly busy lesson program that usually keeps the arena fairly booked up in the evenings and most weekends, but I hung out after my ride for a bit with the barn owner (who is a college friend) and we talked about the possibility of me coming up a little more over the next few weeks until things dry out, so we'll see how that shakes out. The weather immediately got garbage again after Monday was so gorgeous, so I haven't been back yet, but it's nice to be able to potentially have that option on the rare occasions the arena is empty :) if they ever finalize my agency's remote work program again (it's in a pilot right now), my boss has already indicated she's fine with me working primarily from home, so that would make hauling down when the arena was empty wayyyy easier. Food for thought anyway! It's nice to have plans and backup plans and backup backup plans, haha.
Since I got my riding done so early in the day, we spent lots more time outside soaking up the sunshine!