Man Missouri has been teasing us all week with GORGEOUS weather! And predictably, I think it's supposed to snow next Monday. Le sigh.

You already saw that I rode Cinna earlier this week, and I alluded to a better ride on Ruby this week when I posted yesterday's lesson recap. It's been a great week for riding! Both girls have worked twice this week, and I'm feeling REALLY EXCITED about tomorrow's lesson (not that I'm not ALWAYS excited about lessons, but more so than usual lol). I also have a friend from my GMO tagging along so I'll get like 3 hours of horse chat in the truck which makes me VERY HAPPY. 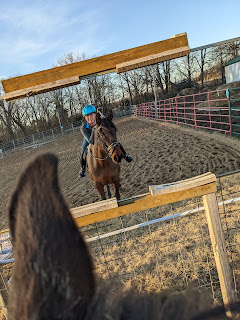 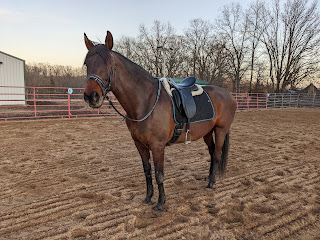 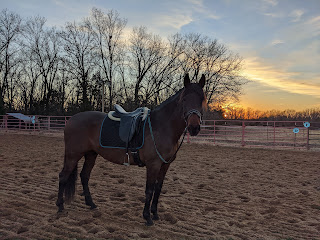 Tuesday was Ruby's turn to work, and the difference in her canter from the lesson the weekend before was... like a complete 180. Actually when I first asked her to trot, she softly stepped up into the most ridiculously lovely canter and so I ended up spending way more of the ride cantering than I usually do because it was so amazing! At one point I thought to myself "TrainerB will never believe this" and since we happened to be texting back and forth about lesson times anyway, I took a 3 second video at the canter and sent it to her. After that ride the show in April went from a "no chance in hell" to.... "probably still no chance in hell but MAYBE", so I bought my vaccinations and scheduled my vet visit to get teeth done/Coggins tests (her Coggins is good until May so I don't NEED it need it, but I want to get back on an early spring schedule for future show seasons). 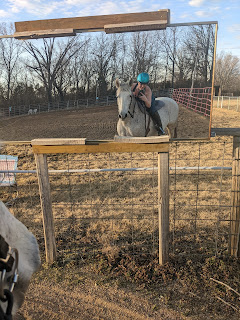 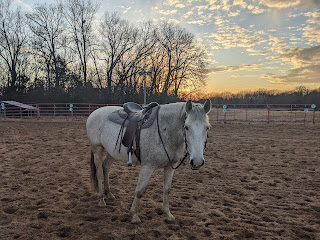 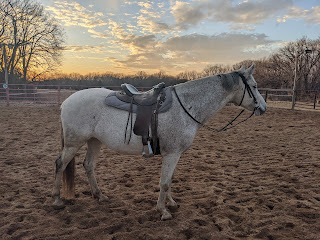 Cinna had another great ride Wednesday. We were able to use pretty much all of the arena (since the ice finally melted lol), and she's going really well in the current tack set up. I'm still hoping to get her out to TrainerB's for a lesson at some point, although that probably won't be until April or May at the rate I'm going trying to get Ruby ready for a rated show. I'm gonna horrify TrainerB when I show up in our "drendurance" get up, but Cinna seems happy and comfortable in this in a way she wasn't in my dressage saddle/other bridles.... so.... it is what it is, lol. I toyed around with the idea of taking Cinna to our local schooling show in a few weeks but then realized what I'm riding her in is very clearly not dressage appropriate and I'm not actually sure it's western dressage legal either so... oh well. She also really surprised me by being an adult about working through the puddles at the far end of my arena (where it gets like NO sun so it's always the last section to dry after significant precipitation). She did have to be coaxed through the first few times and then I made her stand in a puddle while I shoved her full of treats, but then after that it was a complete non issue, which was nice! 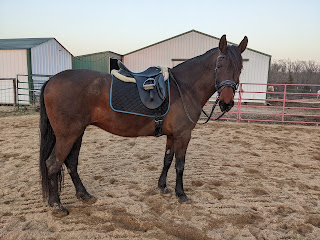 Last night we had another great ride, and I actually worked a little bit on the canter work from 1-3 - TrainerB and I had talked about what 1-3 requires because she asked me if I was interested in Regionals and I told her yes and I'd gotten the appropriate memberships but I didn't know what 1-3 required/that we'd be ready to ride it this year and she was like.... "A LOT of canter" lol. I'm stoked that hopefully tomorrow we'll actually get to work more on the test elements than "keeping the hamsters on Ruby's brain wheel". After this week's "spring of deception", the weather looks more normal for March in the Midwest next week, so we'll see how it goes and if I can keep up the riding momentum. Fingers crossed!
Posted by TrainwreckInTeal at 7:00 AM