Hopefully today WON’T actually be tempestuous, I just like the alliteration. As you can guess from my sporadic posts and my oversharing on social media, last week was a bit of a whirlwind! Lots of exciting news obviously, but also lots of things that made it hard for me to get to the barn. Thankfully towards the end of the week things settled down a little, and I was able to hack Ruby out on the trails both Thursday and Friday nights, with great company! No media, because I get tired of taking blurry between the ear shots with my crappy cell phone camera, but rest assured, I knocked down plenty of spiderwebs and we did lots of trotting on hills -- also in an effort to remind me that she is still in fact just a 5 year old who gets fresh after a week off, Thursday night Ruby totally ran away with me when I let her canter in the field. I don’t typically let her full out gallop (because I’m old and breakable and kind of a weenie), but it made me giggle once I was able to reinstall her brain and regain control. She is normally such a cool customer I forget that in terms of years, she’s really not mature yet!
Saturday kicked off the start of some unseasonably warm weather. DH was up to his eyeballs in homework so I couldn’t pry him away from the computer to supervise while I worked the baby horse, so I pouted for a while and then headed out to the barn to do chores. I zipped through those, because after I was done I got to head out to a friend’s house for a fish fry! I got to hang out and catch up with some friends as well as meet some new people, snuggle cute dogs, tour my friend's barn, and just generally relax and have a good time.
The only bummer was that DH was working and couldn’t come too -- but hopefully his new work schedule will allow for more socializing in the future. I’m not holding my breath because of how changeable schedules are with corrections, but as of right now it’s looking like he will be working day shift with a weekend day off. This will also mean we have evenings together -- something that hasn’t happened since we were first engaged like 8 years ago before he worked for corrections. I feel like there might be a fairly long adjustment period for that -- I’m kind of used to doing my own thing like 70% of the week. Regardless, I’m excited we will get to spend more time together!

Sunday was a fun day filled with lots of productivity! After running some errands and getting some house cleaning done, we loaded Cinna up and trailered her over to ACS. I wanted to gauge how she would behave under saddle in a new location -- there is a schooling show in a few weeks I am hoping to take her to, but I want it to be a positive experience, and not have a meltdown. Since she’s been over to ACS for her farrier visits, it’s not a completely new place, so I thought it would be a comforting place to try to ride her in. Aside from a minor temper tantrum about loading, she trailered over and then tacked up like a champ. I was kind of torn about where to ride her, in the indoor or the outdoor, but I opted for the outdoor. I figured there would be much more going on (so more to expose her to) outside, so it was a better way to gauge how she would react to new stimuli. Here’s where you get a great big fail -- I remembered the camera and was hoping DH could get some media...... buttttt I forgot to make sure there was a memory card in it. And of course this was the ONE time I didn’t bring the whole camera bag, just chucked the camera in my purse, so no chance to grab a spare and keep shooting. Dammit. He did manage some okay cell phone stills and video, so you get those instead.

Overall, she was really super. She was very looky, but tried as hard as her little baby brain could manage to stay focused and listen to me. I was riding around dinnertime, so all the horses were being brought in. At one point, one of the horses who hadn’t been brought in yet was racing around and bucking. I just kept her attention with lots of changes of direction until the danger had passed.
After lots of circles, diagonals, centerlines, and changes of direction, I had DH read us through Intro A and B. I was actually surprised at how well they rode, minus the long diagonal free walk in A. I know one of my goals for October was to develop an actual free walk, but a new place didn’t seem like the best place to try it, haha. So if we do show, I’m just going to go ahead and know ahead of time we’re going to be dinged pretty good on that movement. But when I started showing Topaz, she didn’t have much of a free walk either, just took some time to develop, so I'm not gonna stress about it. And the great thing about this particular schooling show is that all tests are done in a full sized court (instead of a small court for intro/training like some shows), which I really like for the babies. 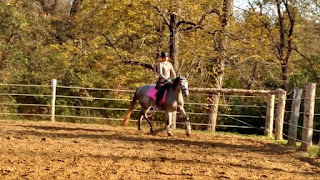 No riding yesterday because I had a GMO meeting -- i did manage to squeeze in a good lunge with Ruby. But the best part of my day? The hot tub is finally operational! We got it last Tuesday but there was an issue with the pump, and then we played phone tag with the company’s repairman for a few days. But he was finally able to come out and replace the pump yesterday, so hooray! Of course, it was 90 degrees yesterday so not the best day to test it, haha, but we didn't care! 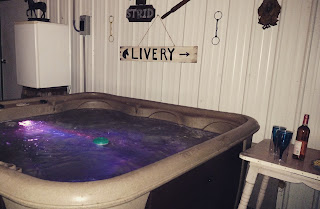 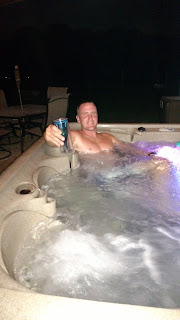 Posted by TrainwreckInTeal at 5:34 AM