Due to some overwhelmingly complicated life stuff, I think blogging will be on indefinite hiatus -- I will try to still read everyone else's updates, but no promises on comments either! 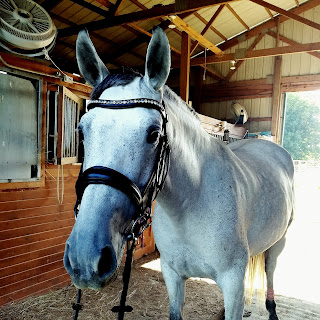 Nothing wrong, the changes will be good (I hope!) but you know how historically bad I am with changes, so I need a minute to figure out my new normal. In the meantime, the horses are still great (and well-dressed, see above!) and things are still clipping along at a good rate. I will still be posting on social media, so head over there if you want to keep up while things are quiet here! :)
Posted by TrainwreckInTeal at 5:00 AM 18 comments: 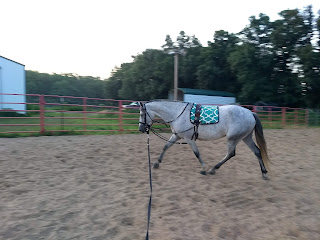 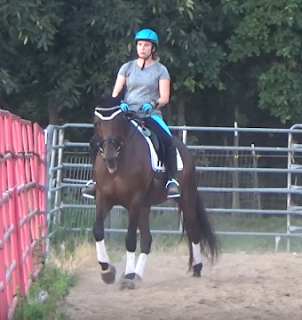 Posted by TrainwreckInTeal at 8:30 AM 12 comments:

Y'all, I'm pretty sure my horse missed her calling as a bridle model..... Just sayin' 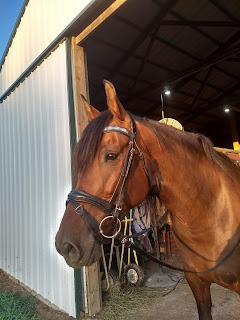 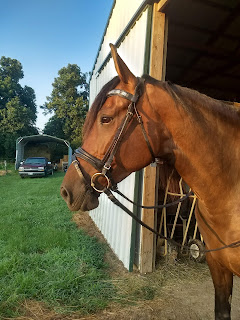 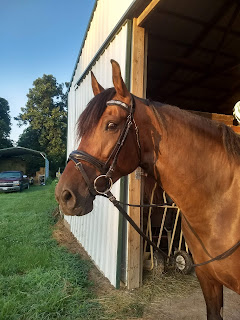 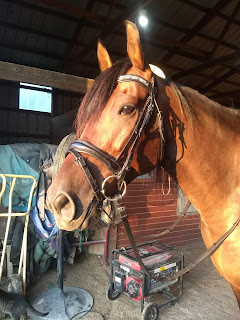 Featuring Ruby's new Red Barn Piaffe bridle that I annoyed Aimee into selling me (just like Otto, are you sensing a pattern? 😂). My horses are incredibly grateful for her good taste, and that she's willing to sell me pretty strap goods 😍 they're also probably grateful right now that I made myself so sick last night unloading hay in the heat and humidity that it's probably going to take me a few days to recover, so they get a mini summer vacay.

Posted by TrainwreckInTeal at 8:00 AM 16 comments:

I think I might have recovered some of my brain cells enough to write a coherent entry. We'll see! This weekend we finally got a break from the heat wave, and Saturday was GORGEOUS. Once chores and catching up on some things around the house were done, I dragged DH on a trail ride. I didn't want to drive super far, or deal with a ton of people, so I scrounged up a new place we'd never been to try. Since it was a new place and I wasn't sure what to expect, I opted to take Ruby. 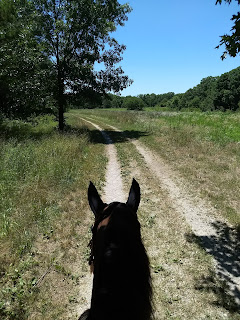 We went to Three Creeks Conservation Area -- it wasn't overwhelmingly awesome, but I'd ride there again. It's open to pedestrians, bicyclists, and horseback riding, but the parking lot definitely isn't built with horses in mind. Although there was a really nice mounting block, bonus! When we got there, there were two other trailers, and a few cars. We actually ran into the other group riding as we headed out (they were just getting back). Because there wasn't a lot of room to park (and also I was worried some idiots would block us in), we ended up parking on the side of the gravel road (it dead-ended in the parking lot). That worked out okay, and we were tacked up and on the trail quickly. After running into the big group coming back as we were going out, the rest of our ride was pretty quiet -- a handful of pedestrians, and one other pair of riders (on really cute gaited horses!). Thank God no bicyclists 🙄 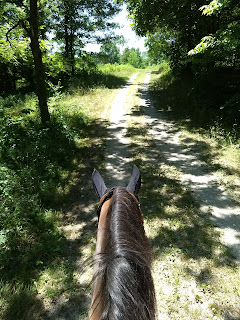 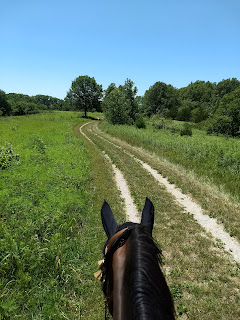 There wasn't a ton of shade, so I'm glad we had nice weather (80 with low humidity) -- I think it would have been miserable in the 90s! It probably also would have helped to get there earlier in the day, but ya know. There were some nice open fields to trot in (if you were so inclined, which we mostly weren't), some hills, and one particularly rocky section -- if it hadn't ended about 150 feet in, I would have turned around, because my horses are barefoot and huge rocky sections are not my favorite. The conservation area is called Three Creeks because it has....three creeks (shocking, right?). But we managed not to hit any of them on our ride, which unceremoniously ended at a sign that said "trail closed". There were a few other trail forks we could potentially have explored, but we were reaching the end of DH's patience, plus our hay guy had called and needed us for the afternoon, so we opted to head back. 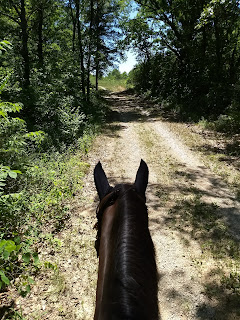 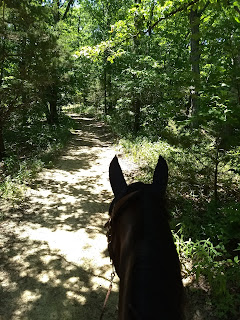 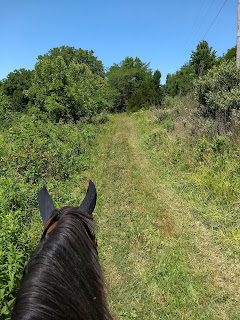 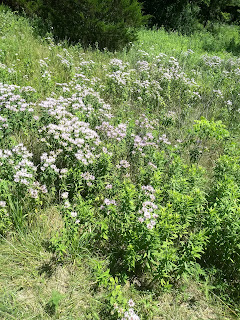 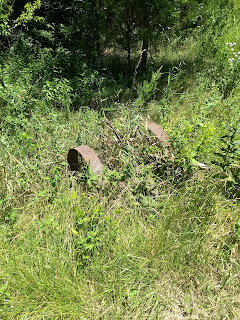 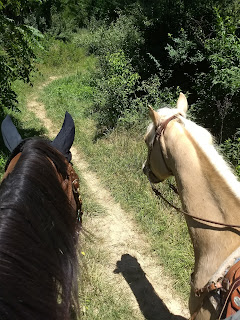 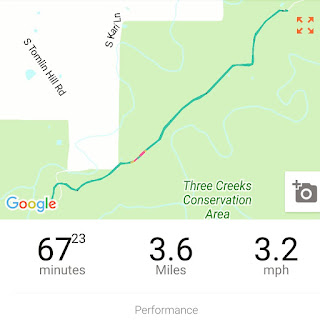 It was a quick, easy place to ride, and would probably be a decent first outing for a young or green horse. I think we'll probably go back, just because of how convenient it is, but it definitely won't be replacing Indian Camp Creek as my favorite trail! The rest of the evening was devoted to farm work, moving various tractors and pieces of equipment to and from hay fields. The tractor pulling the rake was having some mechanical issues, so we ended up not getting anything baled, but DH headed back out there yesterday afternoon for a few more hours of work and I met him to bring home 180 beautiful bales of hay 😍 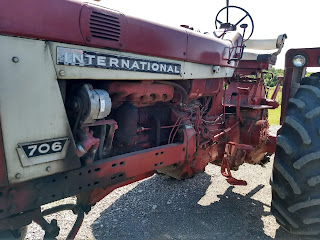 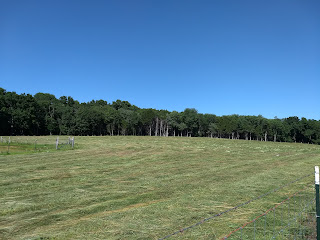 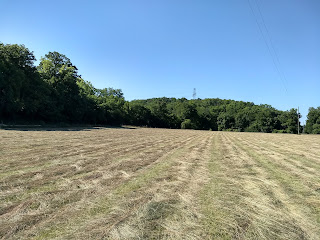 Posted by TrainwreckInTeal at 6:00 AM 16 comments:

I have both words and media for you, but no brain cells to organize them. DH got called in to work overnight unexpectedly and I've been melting in this heat wave for most of the week and dealing with some work-related stressors. So you get this miscellaneous photo dump in lieu of a real post, but I figure since it's a holiday week things are slow in blogland anyway! 😉 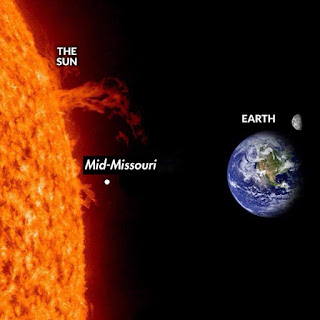 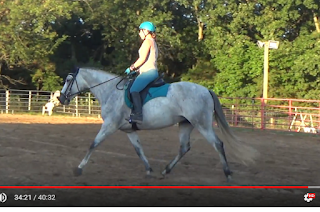 Hopefully everyone survived the 4th with all their digits and sanity intact! 😎
Posted by TrainwreckInTeal at 7:30 AM 12 comments: