Lesson Recap: Forward and Back

Whew! Was sort of hoping I could find time for a year-end recap, and I have some other exciting news to share soon, but in the meantime....

I managed to sneak in a lesson last weekend! Our holiday plans got a little out of sorts, so when I had last Friday off work and it was forecasted to be 65 degrees (with Saturday and Sunday being full of freezing rain and single digit temps/windchills), I reached out to my trainer about sneaking in one last lesson for the year. DH came with me, but spent most of the lesson watching videos on his phone for his new hobby (distilling his own alcohol, sigh), and the Pivo was on the struggle bus because 60% of the time I was riding there was someone else either schooling or cooling out from a previous lesson, so that footage is a mess. So. Less media than usual this week, but something is better than nothing I guess! 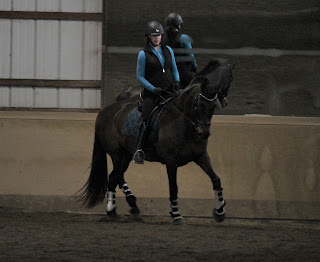 Nothing earth-shattering in this lesson, but I was fairly tickled that Ruby came out after essentially three weeks off (between Penny and some bad weather) and was her super solid, steady self. We spent a lot of time at the trot, making sure she was letting me influence the tempo, sending her forward and back and forward and back forever and ever. We also had probably some of the nicest uphill canter departs we've had in AGES, where she just stepped up into the canter with zero theatrics -- that's something that probably still shouldn't be plaguing us now that's she's ELEVEN (yesterday!), but what can I say, I have a lot of canter baggage and therefore CREATE a lot of canter baggage with my horses haha. 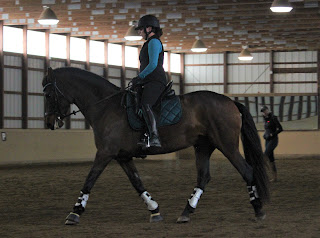 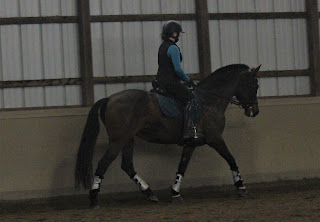 My instructor also had some really nice things to say about how much my position has been improving - this was probably the first lesson she didn't have to remind me (AT ALL) to corral my rogue right shoulder, haha. And I'm getting more confident in the timing of corrections and being able to stop some of Ruby's nonsense before she gets started, lol. On Ruby's end, we're still lessoning in the Paladin noseband with the Nathe, but in this particular lesson she got a little annoyed and teeth-grindy towards the end of the lesson. She hasn't done that in a while, and never at a lesson or in this bit (although she'll do it in the sidepull too, the bit doesn't seem to be a factor), but I think she was just extra lit up from all the temp swings and probably wanted to canter quite a bit more than we schooled in the lesson. I haven't noticed her doing it schooling at home lately, but definitely something I want to make sure I remember in case it comes up again.

Since this was my first visit since Christmas, my trainer also had a nice little gift for me plus a Christmas card with information about their tentative show schedule for 2022 - and a list of all the memberships and things I need to show recognized, lol. Shit is getting real! I got online yesterday to start tallying them up and came to $585, which is before my GMO memberships (another $105 if I join both my local and my trainer's local GMO).
Posted by TrainwreckInTeal at 5:00 AM