April at the Arch: Friday

Obviously the show didn't start until Saturday, but I hauled up early afternoon Friday to get Ruby all settled in and to school in the competition arena. The venue is only about an hour away, so I worked a half day, tossed her on the trailer a little afternoon, stopped and picked up two other horses I was transporting to the show, and arrived about quarter to 2 pm. I found my "group" from TrainerB's barn, and they had already picked up my show packet -- mercifully there were no issues with it (I was worried doing my own vaccines would be an issue), so I made a few trips back and forth from the trailer and soon Ruby was all settled in. 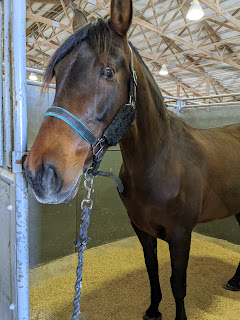 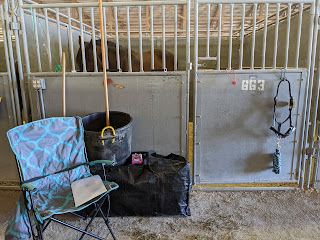 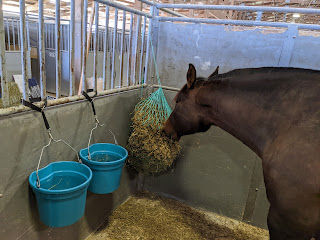 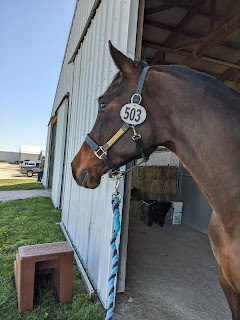 I was scheduled to school around 6, so I got a chance to wander around and catch up with some friendly and familiar faces, which was fun! Ruby settled in like an absolute champ - eating and drinking with no issues, and only the occasional calling out (probably missing Trigger, lol). She was a little bug eyed at first, but aside from giving everything second and third looks, she was completely fine. I was a little dismayed to see how sloppy the outdoor was when I wandered down there, but then I reminded myself of all the work I made her do through my arena puddles this winter, haha. Yay past Leah, good job preparing Ruby to trot through water lol. 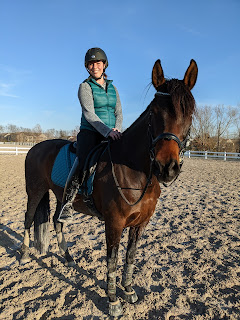 The schooling ride went fairly well. We both started off pretty tense, and we had a few... ermm... enthusiastic canter departs (which are becoming our trademark, lol) but I think we were both eventually able to take some deep breaths and calm down, and by the end I was feeling pretty good about things.

Friday was a late one - between the bathing and the tack cleaning and getting things ready for Saturday, I didn't leave the barn until 9:30 to head to my hotel, where I crashed HARD. Saturday the first of the riders from our barn went at 8 am so I had to be up bright and early!
Posted by TrainwreckInTeal at 5:30 AM